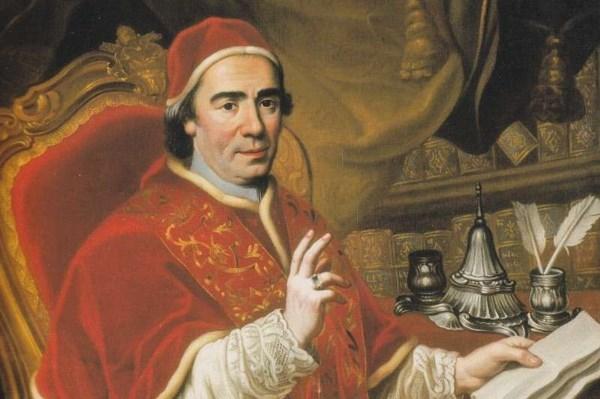 Thomas McCoog SJ continues his account of the tumultuous history of the Jesuits in the 18th century. With the Jesuits having been expelled from Portugal, Spain, France and Italy, the future of the Society hung in the balance. And what’s more, a papal conclave was just beginning. What lay in store for the Society of Jesus under Pope Clement XIV?

Read part one of Thomas McCoog SJ's series on the restoration of the Society of Jesus: The Jesuits in Europe before 1769

The gathering of ominous clouds did not disturb all Jesuits. Some saw the current inconveniences as a minor setback and predicted the immediate return of a stronger, more influential Society to the kingdoms from which it had been expelled. The Society remained under the protection of Jesuit saints who would not allow any permanent damage. Giulio Cordara, an Italian Jesuit who lived through and later wrote about the Suppression, claimed that he personally knew one Jesuit so confident of the Society’s return to Spain that he even wagered twenty pounds of chocolate: he lost. ‘These even grave men,’ Cordara noted, ‘when they want something a lot are often deceived by their hope and determination.’

The papal conclave of 1769 lasted three months as the Society’s friends and opponents sought an acceptable candidate. It is important to recall that the kings of France, Spain and Austria could each veto one candidate per conclave (the ius exclusivae) for motives that need not be disclosed. But said veto could only be used once and thus was more powerful as a threat. Perhaps because the anti-Jesuit monarchs had three vetos, it has often been suggested that the Bourbons used this power, along with money, to ensure the election of a pope that would execute the Society’s universal suppression. However, no evidence of a pre-election agreement has ever been identified. Indeed some Jesuits rejoiced at the election of Lorenzo Ganganelli as Pope Clement XIV. Two months later Clement lifted Jesuit spirits with his effusive praise for the Society in his confirmation of Jesuit missionary privileges in Caelestium munerun:

We therefore, desiring to foster and advance by spiritual graces the piety and labours of the said Religious, and likewise the religious spirit and devotion of those to whom they are sent, being moreover induced by the prayers of the same Lorenzo Ricci humbly addressed to us for this end, and wishing to promote as far as we can in the Lord his pious resolves, trusting in the mercy of Almighty God . . . grant, &c.

Shortly thereafter, perhaps apprehensive of papal intentions, the Bourbon ambassadors delivered detailed memorials demanding the Society’s universal suppression. Instead of total suppression, something Clement claimed he could not do because the Society retained support from Austria, Sardinia, Venice, Genoa and Poland, the pope tried to satisfy the Bourbons with the public humiliation of the Society as evidence of his goodwill. Individual Jesuits were removed from prestigious positions; Mario, Cardinal Marefoschi, condemned the Society for gross incompetence and removed it from the administration of the Irish and Roman Colleges without hearing any defence from the Jesuits themselves. Meanwhile the Society was losing its international patrons: Austria, Prussia and Russia annexed sections of Poland at the first (of three) partitions in the summer of 1772; Victor Amadeus III, married to a sister of the king of Spain, ascended the throne of Sardinia in February of 1773. More significant was the loss of Austrian protection: in order to secure a marriage between her daughter Marie Antoniette to the French Dauphin Louis in 1770, Empress Maria Theresa promised not to impede Bourbon efforts at suppression although she herself had nothing against the Jesuits. For more than a year draft copies of a papal statement circulated among Bourbon courts. The final statement, downgraded from a bull to a less important brief, was signed by Clement on 21 July 1773. It was executed on 16 August. In Rome, civil authorities arrived as Jesuits were starting their evening meal. The English Jesuit John Thorpe, English confessor at St. Peter’s and then resident at the College of the Penitentiaries (now the Hotel Columbus), related how all were gathered into a common room and forced to listen to a reading of the brief. They were kept under house arrest for eight days, before each now-former Jesuit was released to fend for himself. A year later, Thorpe recalled the catastrophe:

. . . last night was the Anniversary of the most afflicting as well as the most alarming event that I was ever either a part or a spectator of. I do not know what Death is or Judgment is to be, but such a night as that wherein the fatal Brief was executed at Rome, far surpassed all my former notions of surprise, horror and affliction: my heart yet trembles at the remembrance.

Thorpe, who incidentally was responsible for securing Father General Ricci’s soutane and shoes for what is now Stonyhurst College, claimed ‘The General bore the stroke, as he does his confinement with all his accustomed meekness & resignation. He kissed the brief as soon as it was read & resigned himself & all he had into the hands of the Executioners.’ Imprisoned initially in the English College, Ricci was transferred to Castel S. Angelo on the charges of financial irregularities. There he died on 24 November 1775. Castel S. Angelo may remind many of Tosca; to Jesuits it will be forever associated with the outrageous treatment of an innocent man. As with the English colleges in Spain, the Venerable English College passed from the Society to the administration of the secular clergy.

The papal brief Dominus ac Redemptor reviewed historical antecedents for the suppression of the Society of Jesus, the most (in)famous was the abolition of the Knights Templar in 1313. On the eight occasions on which the papacy was previously obliged to suppress religious orders and congregations, with the exception of the Knights Templar, each seemed to be dwindling in size and fervour – not so in the case of the Jesuits. Clement repeated many of the charges and accusations traditionally made against the Society of Jesus without passing judgement on any. The refrain throughout the brief was the importance of peace within the Church. As a persistent disturber of the peace, the Society had to be sacrificed. Owen Chadwick, sometime Regius Professor of Modern History at the University of Cambridge claimed this was ‘the most tremendous use of power in the Church ever achieved by a pope. To abolish the strongest of religious orders without an enquiry, and with no reason alleged was an unique act of international supremacy.’

Part Three: The Survival of the Jesuits

Part Four: The Restoration of the Society of Jesus

Jesuit Restoration - Part Three: The Survival of the Jesuits