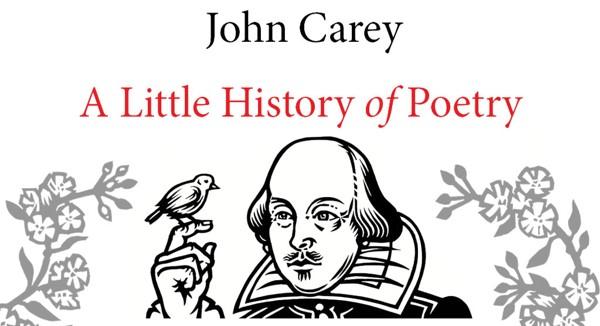 During the unprecedented hardship, local and global, of the coronavirus pandemic and the consequent lockdown, poetry has occasionally been mentioned as a source of solace, encouragement and, indeed, enquiry. Poetry is read to the nation on BBC Radio 4; new poetry does emerge.[i] Clearly, we need more than poetry, but poetry can have a place and a role to play. As Rowan Williams put it, poetry involves faith and is a way people ‘discover something they didn’t know they knew.’[ii]

John Carey’s A Little History of Poetry is delightful and succinct: 40 perceptive chapters in 295 pages, covering nearly 200 poets. He begins with the 4,000-year-old Epic of Gilgamesh from Syria/Iraq and ends with lines from the Australian poet Les Murray (who died last year) about ‘language’ and its relation to ‘the meaning of existence’. Poetry is indeed ‘language made special’ (p.1), which can ‘unsettle beliefs and question certainties’ (p.295) as well as perhaps refashioning views and habits. Visually, there is additional pleasure to be found in Nick Morley’s Linocuts, which introduce each chapter.

Still, the book is a history – a history of poetry and the contexts in which it is embedded: personal, cultural, religious, social, linguistic, political. Poetry will be read in shifting and no doubt shifty contexts. A poetry magazine at the University of Leeds when I was an undergraduate in the 50s and 60s, was Poetry and Audience. There was no intention to restrict the ‘audience’.

Carey has a chapter on twentieth century poets who lived at the sharp end of politics, an entanglement not limited to any one period. The fourteenth century included the Black Death, the Peasants’ Revolt. It was also a time for mystics and poets. Carey notes that in William Langland’s The Vision of Piers Plowman, ‘enquiry and questioning dominate… not awe or worship’ and quotes the fine lines that wickedness is no more to God’s mercy ‘than in the sea a spark’, which may sound like (good) contemporary theology. By contrast the unknown author of Sir Gawain and the Green Knight is blithely uncritical of both court and Church, which seem to live in separate worlds. Embedding varies. Geoffrey Chaucer (like Auden, Donne, Milton and Yeats, he gets a chapter to himself) is splendidly comprehensive. He wrote poetry in which lovers are holy, humour is ribald, and Church a profiteering institution. Ecclesial problems are not confined to our own time.

The seventeenth century, a time of religious acrimony and civil war, allowed some individualism to flourish: George Herbert, Henry Vaughan, but the giant was Milton, deeply involved in religion and politics. Carey notes there is violence in Paradise Lost, but not in Paradise Regained and quotes a line from Milton’s sonnet for General Fairfax: ‘For what can war but endless war still breed?’ Much later W.B. Yeats – for Carey, ‘The Great Escapist’ – was notorious for excluding First World War poets from the 1936 Oxford Book of Modern Verse on the grounds that ‘passive suffering’ was not a subject fit for poetry. It is indeed difficult to be well embedded, or duly incarnate. In the last chapter Carey cites two poems by Seamus Heaney about his cousin, who was shot and killed during the troubles in Northern Ireland. The later poem finds the first was evasive. The chapter’s title, ‘Poets Who Cross Boundaries’, gives one characteristic of what can be good embedding.

The ‘language’ of poetry is protean. There are, Carey tells us, about a thousand words in the alliterative poetry of Beowulf that do not appear in Anglo-Saxon prose. Alliteration puts a strain on vocabulary – there are just so many words beginning with a given consonant. Perhaps the problem can be overcome by kennings – riddles or periphrases – in which the ‘sea’ becomes, say, the ‘gannet’s bath’. Certainly, poets come up with new words – Milton beats Shakespeare by 630 to 229. Moreover, there are not only new words but different ways in which words are used. Shakespeare finds ‘an interaction between the abstract and the concrete’. Edmund Spencer invents a new stanza form, which alters the poem’s space, establishes boundaries and invites thought.

‘Ordinary’ language came to be used in what is clearly great poetry: Wordsworth and Coleridge, to say nothing of Robert Burns. This use of language is another instance of ‘embedding’. Mary Oliver (1935-2019) crossed the gap between poetry and what Carey calls the ‘book-buying public’. None of this is straightforward – for Carey, ‘modernism’ needed to be both invented and got over. Eliot’s imagination found ‘new wholes’ which stay in the memory: ‘I will show you fear in a handful of dust’. Wallace Stevens, ‘caught in T.S. Eliot’s backwash’, made much of the difficult idea of ‘imagination’.[iii] Certainly language and imagination struggle to live together truthfully. R.S. Thomas’s warning, ‘Language will trick / you if it can’, is real enough.[iv]

Who does or does not write poetry matters. Carey points out that, ‘more women published in the eighteenth century than ever before.’ (p.98) A crater on Mercury is named after a distinguished Chinese women poet – Li Qingzhao. Discussing the poets of the First and very different Second World War (almost always men), he quotes Lois Clark, an ambulance driver during the Brixton Blitz. Women poets are indeed well represented: Charlotte Mew and Elizabeth Jennings and many others find a place.

Carey also includes ballads and hymns – poetry does have a broad communal basis. John Newton (an ex-slave trader) wrote ‘Amazing Grace’, which came out in a hymn collection he produced with the poet William Cowper. It is often sung today. John Henry Newman’s ‘Lead Kindly Light’ was sung spontaneously by miners trapped in a Durham Colliery in 1909.

The History is intentionally global – Europe (West and East), Russia, India, South and North America, Japan, China…[v] There are a few empty spaces,[vi] but this does not detract from the book’s wideness of spirit. A global take, moreover, needs the necessary magic of translation. This happens in ‘West meets East’, with Waley and Pound on Chinese and Japanese poetry. A Chinese boy, Luo Binwang wrote ‘Ode to a Goose’ in the seventh century, at the age of seven.

I’ll end with lines from an Orkney ballad that Carey is fond of quoting. A stepmother (do stepmothers need re-imagining?) turns a boy to a ‘laily worm’ (loathsome snake) and his sister to a ‘machrel’ (yes, a mackerel):

And every Saturday at noon

The machrel comes to me,

And she takes my laily head

And lays it on her knee,

And combs it with a silver comb,

And washes it in the sea.

This startling image keeps both impossibility and carefulness together. No doubt after the ‘lockdown’ we hope to go back to ‘ordinary life’. But what we might return to is best not imagined as a recreation of the society or Church we knew before coronavirus came our way. We need to find how to be more careful of each other and of our planet. Already we are discovering there is such a thing as society…

Brian B. McClorry SJ is a member of the Corpus Christi Jesuit Community, Boscombe.

[i] ‘Lockdown’, by our Poet Laureate, Simon Armitage, appeared in The Guardian of 21 March 2020. Armitage comments: if we use ‘thoughtful language, something more thoughtful occurs in life.’ Indeed, ‘there’s just something sacramental in the ordinary descriptions of everyday life’.(‘ Lockdown: Simon Armitage writes poem about coronavirus outbreak’, The Guardian, 21 March 2020: https://www.theguardian.com/books/2020/mar/21/lockdown-simon-armitage-writes-poem-about-coronavirus-outbreak)

[iii]  For Wordsworth and Coleridge, according to Mary Midgley, imagination is the middle term between thought and feeling. See her Science and Poetry (Routledge Classics, 2006), p.75.

I am not your God

If you have not denied me once, twice,

If I have not heard you complaining,

Or doubting my existence.

Quoted from Peggy Rosenthal, The Poets’ Jesus: Representations at the End of a Millennium (OUP, 2000), p.94.

A question of forgiveness

Co-creators of a better world