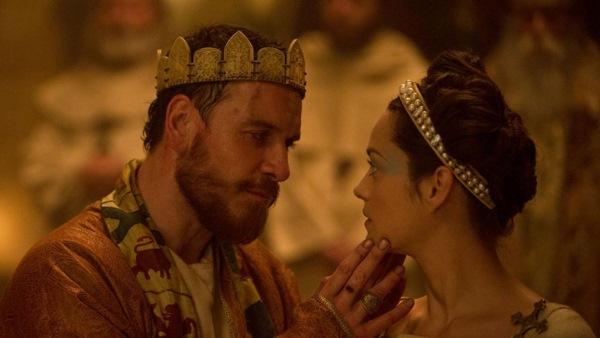 You will not be disappointed by Justin Kurzel’s version of Macbeth. It is visually arresting as it moves from vivid blood reds, to cold, brutal light and Scottish bog. The landscapes, at once so immediate and yet also shifting, emphasize the shifting planes of reality – the stark physicality and harshness of life whether peasant or king; the permeable planes of an interior, tormented, mourning world stalked by death and the exterior world of realpolitik which, though medieval is also very modern. Adam Arkapaw’s cinematography makes it visually arresting and physical, moving us into the different layers of the film’s moods, as does the extraordinary soundtrack of Jed Kurzel whose music virtually constitutes another presence in the drama.Then there is Kurzel’s teasing approach to the supernatural. In Shakespeare’s Macbeth, highly political and topical in 1606, witches were a significant feature of the social as well as the religious and psychological landscape: Forces from another kingdom that destabilized the human order. King James – a Scottish King on an English throne – had, himself, recently published a whole treatise on Daemonologie dealing with ‘The fearefull aboundinge at this time in this countrie, of these detestable slaves of the Devil.” The Shakespeare play exploits this very present fear, playing into the public and royal paranoia still present from the Gunpowder plot (1605). It is a very clever piece of writing and stagecraft that makes Shakespeare give us the porter’s scene – ‘If a man were porter of Hell gate’ - in which the ‘equivocator’, instantly recognizable to the audience of the time as a Jesuit, makes an appearance (the was Order thought to be implicated in the plot). Of course, Jesuits are also linked in the play to the ‘slaves of Satan.’ In Macbeth, Shakespeare not only explores the instability of the political and social order, but taps into the fears that this is no mere human struggle; it is a supernatural primal drama of the cosmic struggle between the powers of evil and Christ. We must also remember that in Shakespeare’s world the King is a sacral as well as political figure who represents a stable redeemed world: he is God’s anointed. Although he cuts the porter’s scene and does not really explore the sacral, Kurzel does capture something of the apocalyptic battle in which Macbeth is defeated.Kurzel clearly recognizes that a contemporary audience may not have the cultural, religious and metaphysical background that Shakespeare can assume. In his hands, the witches become more ‘unheimlich’ or uncanny. Like the mists that come and go over the primeval bleak landscapes they too appear and disappear. They are not ‘hags’ but they disconcert. He also adds a younger woman to their number. In doing so, Kurzel adroitly reinforces a major theme that runs through his film: Where Shakespeare works with the dualities of natural and supernature, the figures in Kurzel are more like the Fates in Greek drama. They possess knowledge of the future but their relationship to humans is ambivalent: are they malign or seers? Are humans merely instruments in their game or are ‘the witches’ themselves priestesses, symbols of an endless cycle of history of violence and power struggle?

In this way, the real haunting in Kurzel’s Macbeth is the recurring motif of dead children. The film opens with Macbeth and his wife burying a child which we assume is theirs. He brutally destroys Macduff’s wife and children by burning them at the stake but he cannot stop or change the relentless turning of the wheel of time and fate totally indifferent to human lives. In its vivid and dramatic cinematography, we are given the sense of inhabiting a ‘demi-monde’ in which Macbeth’s bloody sacrifice of Duncan, whose indelible blood continues to wash through the colour palettes of the film, sets off a force which he cannot comprehend, let alone control. The film captures this inner drama with increasing intensity as Macbeth’s world is stripped of life, shrinking to him alone. He is surrounded by a great and endless army of the dead, that always-present ‘other world’ just on the edge of our vision, the still-born world he has helped to father in his lust to secure an empty crown. When it comes, Macbeth’s death is as much a bewildered relief to him as it is to us.

Kurzel achieves this concentration and dramatic tension through stripping down the play to the character of Macbeth: he is its title, its subject and its world. It is as if the whole film is an austere and sustained meditation on the echoing-into-emptiness of Macbeth’s valedictory,

To the last syllable of recorded time;

And all our yesterdays have lighted fools

The way to dusty death.’

Vivid and intelligent though Kurzel’s treatment is, I think it looses something of the power, subtlety and black humour of Shakespeare’s play. The decision to centre the whole drama on Macbeth greatly reduces the depth and complexity of Lady Macbeth and how she relates to ‘the witches’. The loss of the Porter not only diminishes a dark but comic moment, it misses the clever relocation of the action of the play to a sort of Hell. The porter’s scene highlights ‘equivocation’ – Lady Macbeth and her husband are the arch equivocators, especially with their own consciences. Above all, the decision to deliver the lines as somewhere between an interior soliloquy and mumbled public speech largely destroys the poetry and power of Shakespeare’s language which reaches beyond the stage into our imaginations and souls.

The film captivates our eyes but does not really enter deeply. Inevitably this has the effect of making the camera rather than the voice and language do the work. This diminishes the range available to the actors. We know from their previous work that both Michael Fassbender and Marion Cotillard have considerable dramatic range. Unfortunately, while they both work well in the film, we never see them stretched and breaking new imaginative ground. In fact, at times one wonders if Fassbender really understands what he seems to be struggling to say. Finally, there is an interesting paradox at the heart of the film. It works, and works well, because it is Macbeth and not McBraveheart. In other words, it works because we know the play; we know what Kurzel is working with, changing and interpreting. The film will not disappoint but don’t forget to read Shakespeare’s version too.