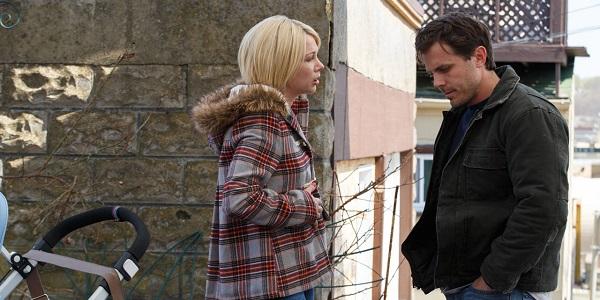 UK release date: 13 January 2017Manchester by the Sea is one of the most moving and satisfying films to be released in a long time. Its art is in its ‘unshowiness’, its integrity. Neither dark nor depressing, it has many dimensions and layers yet it remains always accessible. It is one of those rare works that has interiority and so we are engaged intellectually and affectively without the film needing to signpost its ‘meaning’ or show off with eloquent lines that stand in the way of the very feeling or thought they are intended to capture. There is meaning and there is eloquence but it comes through an honest inarticulacy which is filled with feeling and does not tame it.

The truth, both narrative and personal, emerges in and through the rhythms of the ordinary life and natural seasons. The location is almost banal: the urban, confined landscapes of apartments in Boston or the domestic ruggedness of a small New England fishing town, Manchester. The austere, ordinary light and snow of winter in Boston and especially on the Massachusetts coast illuminates the film. Manchester itself is an attractive, small-ish working town and we get a sense of the community – its closeness, its humanity and its narrowness. But there is no judgement here; there is only a strangely compelling honesty which resists exaggeration. The action moves, as do our ordinary lives, from exteriors to interiors, but these normally unnoticed movements also capture the subtle, deeper movement of feeling from exterior to interior, from public face to private soul. The camera’s attention to the details of faces, clothes, houses, sea and land is never forced but makes the lives of these people real and ‘placed’. It sets the context in which the deeper rhythms of heart and soul are glimpsed and heard. This is effectively facilitated and heightened by Lesley Barber’s score, which moves between her own original compositions, through popular songs, to Handel and Albinoni. This range, especially as it takes in the baroque, does not distract but it places the low-key dramas of human existence (interior as well as social and relational), which would go unnoticed in a different cultural space, and gives them texture, depth and at times nobility. Such is the expressive power of music in a film which maps what cannot be spoken because, paradoxically, even the most eloquent speech would lessen it.

Part of the psychological and artistic skill of director Kenneth Lonergan and all the actors, especially Casey Affleck, is that they resist the temptation to try to articulate the huge pain at the centre of this film. There is a lot of humour and wit, and the genius of that humour is that it expresses rather than denies or suppresses the fragility, the awkwardness, the loss. In other words, it is a catalyst for life. This is how people survive and go on living as best they can without getting stuck, although unable to avoid being shaped by the pain they carry.

There is not a weak performance in Manchester by the Sea. Everything is delicately judged, especially the relationship between Lee Chandler (Affleck) and his intelligent and sensitive but strong and rebellious nephew, Patrick (Lucas Hedges). Patrick is trying not to show how much he is pained by the death of his father, which marked the end of his childhood and the loss of his innocence. In the quiet depths of this film lies idea that death and loss mark us and close the way back to our personal Edens. Patrick tries to return ‘home’ when he has a reunion with his mother and her new husband. The meal they have together is finely observed in its comic stiltedness. The fragility and woundedness is there, and the awkwardness serves to help us recognise that whatever journey people are on, it cannot be a journey of return. Underlying the whole of the film is a sense that histories and relationships make us; we carry them in memory and in the very shape of the life they produce in us. Sometimes, Lonergan conveys this through the use of flashback, but he also subtly weaves the past into the present in a continuous narrative, the past interpreting the present and active in the shape of the future without determining it. Manchester by the Sea is too subtle and too carefully attuned to the inner lives of its characters to go for a straight determinism. We have choices but these are always already informed by what we carry, ‘our story.’ This is captured beautifully in the meeting between Lee and his ex-wife, Randi (Michelle Williams) now remarried and with a new baby. This encounter is a masterclass in how love and pain, loss and guilt, strength and vulnerability, confusion and clarity, can all co-exist in us, resisting our attempts to define ourselves or others by any one characteristic. It is a meeting between two parties, both in touch with the searing and unquenchable pain of their shared history and desperately trying not to hurt each other again. Their broken sentences and tightly held agony allow a glimpse into the depth of two suffering souls. We see that there is forgiveness here but it does not absolve us from pain; there is love but it does not lift the burden that must be carried. Maybe there are some things that cannot be atoned for.

It would be easy here for the film to become another study in nihilism or to move to some sort of happy or redemptive ending. Lonergan and these splendid actors have too much integrity for that. The film ends in neither resolution. Rather, it opts for a realism in which there is hope. Where there is honesty and where there are relationships of care and decency, where our soul is not deadened, then there is a sort of resilience. The journey continues and our history remains but our humanity is not destroyed. There is a sort of humble grace in family, friends, work – in the ordinary. Manchester by the Sea is a place to revisit many times.