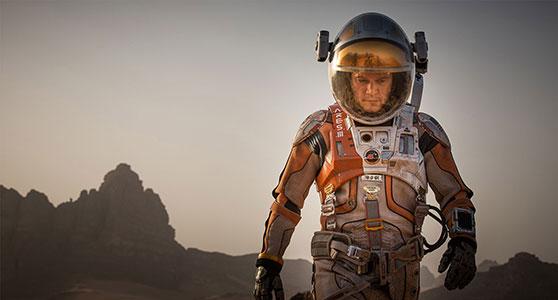 The principle pleasure of sarcasm is that it’s free. Free from seriousness, free from instruction, free from the costly and arduous exercise of communicating what one means. The user of sarcasm can drop a quip like a bad bank note and forget about it, leaving others, if they wish, to try their hand at extracting anything of value.

Not a million miles away – although in a literal sense around 140 million – The Martian drops Matt Damon on the red planet with a decent supply of one-liners and leaves it to us to work out whether anything of lasting importance occurs. He plays Mark Watney, a NASA botanist left for dead who has to figure a way to survive for years in a plastic habitat designed to last days, until the folks back home can work out how to get him back. Another man might have found the circumstance daunting, but for Watney, given all we see, it is not so big a deal.

This is the general tenor. Technical and existential challenges of supra-Himalayan magnitude – the tallest mountain on Mars towers about three times the height of Mount Everest – are shortcutted with snappy off-the-cuffs such as, ‘In your face, Neil Armstrong’. In another drama, with complex tensions and layered depths, such wry levity might have come as a welcome release. But when the supposedly starving protagonist never seems to drop below fifteen stone and expresses equivalent annoyance at exploding the airlock off his hut and running out of ketchup, the emerging topography lacks depth.

Not that the film is entirely devoid of profundity. When Watney needs to make water to survive using hydrogen, oxygen and flame, the only thing he can find to start the process in the flame-retardant capsule is a crewmate’s wooden crucifix. He sends a message to his parents describing how he may die but since it is for something beautiful and bigger than himself, paradoxically, as he puts it, ‘I can live with that’. Best of all, when he reflects briefly upon being the first person on an entire planet to do almost everything – first to see that mountain, first to do a jumping jack, etc – he implicitly recalls the wonder Earth’s first parents must have felt at venturing out into their strange, uninhabited world.

This is probably where the film is at its best and most substantial, when it prompts quiet meditation on the place we live, which is marvellously hospitable, by comparison. When Watney manages to coax the first potato plant up from Martian soil, for example, we become aware for an instant of the tenderness and beauty of life, with a feeling akin to reverence.

Such moments pass quickly, though, crowded out by quippy dialogue, sparkly CGI and the even sparklier cast. Jessica Chastain, Jeff Daniels, Kristen Wiig, Kate Mara and Chiwetel Ejiofor all play prominent if underpowered roles. Ridley Scott’s direction, while captivating, fails to spring miracles from a script lacking the depth and nutrients to sustain the human spirit beyond being fleeting entertainment.