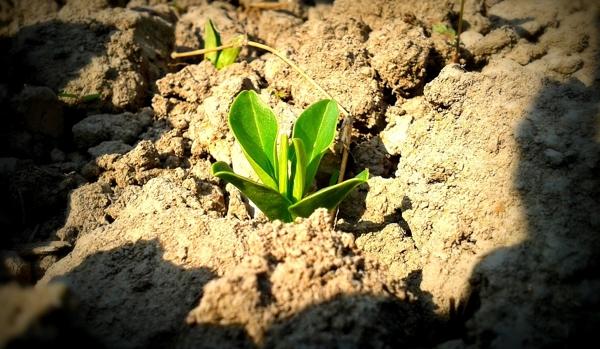 The third O Antiphon takes its cue from chapter 11 of Isaiah, where the prophet speaks about the shoot that ‘will spring from the stock of Jesse’ and will ‘stand as a signal to the peoples’. But it is not until later in the book that the prophet gives some hints as to how that ‘rod/root/shoot’ of Jesse will save His people, as the texts for the gospel acclamation and hymn tell us he will.

By the time Isaiah is writing, Jerusalem has been destroyed, the people of Israel are in exile and the prophet is addressing to them a message of hope that God will bring about their salvation, impossible as that might be for them to believe. It is not hard to imagine what the people were expecting that salvation – from the depths of the Hell that was their exile and enslavement in Babylon – to look like, and it was Isaiah’s task to tell them that God’ promise would be fulfilled but not in the way they desired. God would address the trauma that they were living through with balm that would indeed give them ‘victory o’er the grave’, a grave that had been hollowed out with the collapse of their dreams and their departure from faithfulness to Yahweh. However, this balm would not be applied through military victory or a sudden return to Jerusalem and nationhood. Jesse’s stem had been cut down and pruned back to almost nothing through the experience of the exile and it was difficult to see how that root could flower again. Isaiah’s vision was that it could and would flower again through the coming of the Messiah: not a Messiah coming in glory but a Messiah ‘like a sapling…a root in arid ground’ (Is 53:2), someone whom the crowds would be ‘astonished at and kings would stand speechless before’ (Is 52:15).  This balm would be a balm of what Dietrich Bonhoeffer called ‘costly grace’ – more like witch hazel than aloe vera.

As we end a calendar year full of trauma, a year which has seen political as well as geological earthquakes in more than one part of ‘our common home’, we too might be tempted to think that Jesse’s stem is now more of a stump, planted in such arid ground that it can no longer flower. This is the ground of xenophobia, of political extremism, of continued wars and acts of terrorism, of an endless stream of refugees and migrants and of trafficked human beings, including children. Like the people of Israel, we might find it hard to maintain hope in the face of such unrelenting ‘bad news’. We might find it hard to imagine how God is going to bring about His salvation in the midst of so much suffering. We might wonder if He can ‘hear the cry of the poor’, and what He is going to do about it if He does hear it. The answer to all those wonderings is the same answer that God gave to His people through Isaiah – I have not abandoned you even if you abandoned Me. Amidst all these signs of death and aridity, I will bring forth a new shoot. It will be a fragile shoot; it will grow quietly and without drawing attention to itself and it will require tending and watering. You will need to pay attention to it and to nurture it in order not to be overwhelmed by all that you see and hear and experience in this new period of Exile being experienced by Yahweh’s people in so many parts of the world.

Advent is the time and place to begin to cultivate that attentiveness to the shoot called hope. It is the time to foster our hope and our faith that God will come among His people. He will come in the form of a fragile shoot, but with roots strong and deep enough to deal with the trauma of the world on which He has come to pour balm – the astringent balm of the life, death and resurrection of his Son Jesus.

Reflecting on this antiphon has put me in mind of Father Pedro Arrupe, of whom I have recently had the opportunity to read and savour a beautiful biography, in words (Spanish and English) and pictures, entitled The Arrupe Smile. Fr Arrupe was the Jesuit General from 1965 to 1983, who suffered a stroke in 1981 and resigned as Superior General in 1983. He lived thereafter for another eight or so years in the infirmary of the Jesuit Curia in Rome.

A large part of Fr Arrupe’s gift to the Society and the world was his commitment to tending the arid ground under the feet of those in exile. The plight of the Vietnamese boat people, the precursors of the great wave of refugees that is now part of our global reality, informed his appeal to the Society to do something concrete for them. Thus began what is now the Jesuit Refugee Service, which continues to bring hope to people all over the world that even in exile, a shoot of new life will eventually spring. Arrupe also found himself in a kind of exile at the end of his life, having not found favour with the Church’s leadership, but if he felt himself to be on arid ground for those last years, he did not allow that to overcome him with bitterness or anger. He offered up his sufferings – both physical and spiritual – with grace and generosity, and in that way watered the ground around him, proving himself perhaps more than ever, a true son of St Ignatius, a true disciple and companion of Jesus. It is also quite clear that he lived the message of Advent hope to the end of his life – the Arrupe smile is a testament to that. In that, he is an example to us all – and a true shoot from the root of Jesse.

Sister Jane Livesey is General Superior of the Congregation of Jesus.

Emmanuel shall come to thee