Skip to main content
John Bosco Noronha SJ in 'Ignatius: The Knight Who Fell to His Knees' 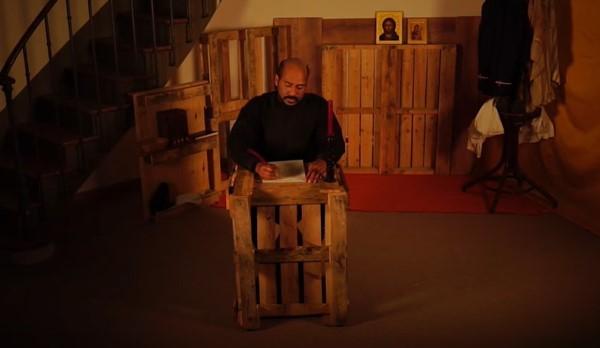 How do you tell a 500-year-old true story when the source material leaves a lot to the imagination? Three playwrights have taken on that challenge, and their interpretations of the life of St Ignatius Loyola have helped audiences engage with his journey during this Ignatian Year in which we have been celebrating his conversion. Luke Taylor SJ considers how the action of God in Ignatius’s life can be conveyed through drama to help us recognise God’s movements in our own lives.

Just over 500 years ago, a Basque knight, his leg badly mangled by a French cannonball, is convalescing. There is, at first glance, nothing particularly dramatic about the scene. Indeed, it seems bathetic, the premature and feeble fadeout of a hitherto swashbuckling career.

So, what draws us back to that iconic image? What happened on Iñigo’s sickbed which escapes the eye, yet whose aftershocks ripple into our present? Three plays, staged or restaged for this Ignatian quincentenary, help us to understand the drama at the heart of Ignatius Loyola’s life: Jonathan Moore’s Iñigo; Fr Dries van den Akker SJ’s Ignatius: The Knight Who Fell to His Knees; and Jack Murphy’s Ignatius: A Life of Dreams.

The first difficulty facing each of the playwrights is Ignatius’s own taciturnity. The Autobiography that Ignatius dictated to Luís Conçalves de Câmara is irritatingly brief. Told in the third rather than the first person, whole chunks are left out – beginning with the first 26 years of his life. The same lapidary instinct is found in the other confessional flashes that appear throughout Ignatius’s Letters.

Ignatius knew from experience that discretion was necessary, given the rumours and slanders circulating around himself and the nascent Society. To my mind, however, the weightier explanation for Ignatius’s brevity is that he does not wish to draw attention to himself, but rather to the action of God in his soul, and then only insofar as that may be helpful to others. But how does a playwright represent such a mysterious drama of grace and freedom?

All three of the plays avoid the most obvious pitfall – a clichéd or clumsy hagiography. If Ignatius was a sinner who became a saint, he was never anything other than an orthodox Catholic. Furthermore, many of his qualities – notably, a very strong will – are evident early and late in his story. Ignatius’s conversion involved something deeper than opinion or even behaviour; it was more like a chemical conversion, but of the substance of his soul.

The motif which punctuates Moore’s play, a blacksmith hammering heated metal, may help us here. ‘Smash it while it’s hot,’ says the blacksmith, ‘then we can make of it what we want.’ Ignatius is the metal, smashed, tested, melded. ‘But we must keep refining, get the impurities out.’ Ignatius quickly learned that conversion is not once and for all, but an ongoing process.

The first conversion at Azpeitia was the transposition of his chivalric dream into a religious and cosmic theme: he would no longer fight for an earthly prince, but for the heavenly king. Murphy’s play highlights the choice via a visual diptych: the knight and a mendicant Francis. The play is also good at showing Ignatius’s dramatic flourish. Laying down his sword before his new lady at Montserrat in an all-night vigil, he directs his quest toward Jerusalem.

At Manresa, however, Ignatius finds that his desire to outdo Francis and Dominic in austere penance leads him into the pit of despair. Gradually, light begins to dawn, awakenings of authentic mystical experience and the maturing awareness of God leading him through felt consolation. Consolation is the central theme of van den Akker’s play, whose monologue retelling of the journey of Ignatius’s soul is noticeably vertical and providential, culminating in his unwilling election as the head of a new religious order and self-offering to God.

Where van den Akker’s play has one actor on stage, Moore’s introduces a huge number of characters, with all actors except Ignatius doubling or tripling roles. We see the agon in Ignatius’s own soul echoed in the conflicts with his aristocratic brothers, a worldly Xavier, and the conservative Gian Pietro Carafa, founder of the Theatines and later Pope Paul IV. Ignatius’s exchanges with the latter are among the best in the play, highlighting his struggle to keep alight the radical fire of his vision in a heavy and corrupt Rome.

Each of the plays interprets Ignatius for a different audience. For Moore, Ignatius is the reformer. Notably, he shows in Ignatius an example of how a male-dominated and celibate hierarchy can learn from women: his depiction of the tender interactions between Isabel Roser and Ignatius, bound by a chaste love, each helping the other, may speak to many adult Catholics who are both loyal to and dissatisfied with the Church.

For van den Akker, Ignatius is the pilgrim. He offers a paradigmatic example of how God leads each of us in our individual vocations. Ignatius’s story, brought to life by British Jesuit scholastic John Bosco Noronha in the performance freely available on YouTube, will no doubt have inspired the lay and family lives of those who have seen screenings of it at the London Jesuit Centre and in British Jesuit parishes during this Ignatian Year. As Ignatius learned that he was not to be Dominic or Francis but a new kind of saint, so we learn that we are not called to be Ignatius but that truest version of ourselves – something for which no precise template yet exists.

Murphy’s play, meanwhile, is written for children, particularly those in Jesuit schools. When I saw it performed by actor Henry Wyrley-Birch at Wimbledon College, where I currently teach, the children were invited to write their own life dreams beforehand. These found their way on stage, where Ignatius read them aloud before recounting his own dreams. The play is participative and fun – especially the loud cracking sound as Ignatius’s leg is broken and reset! – and the children shouted out their reactions to the onstage action.

Those shouts illustrate for me why Ignatius’s story is worth telling and retelling. The drama of his life continues to elicit a reaction in our own. Whilst a mechanical application of Ignatius’s story would only prove harmful, the art of the theatre can become a spiritual exercise, the stage a composition of place, monologue and dialogue a kind of prayer: through these productions, we can hear resonances between Ignatius’s life and the movement of God in our own circumstances.

Luke Taylor SJ is a Jesuit of the British Province, currently on regency at Wimbledon College.