Skip to main content
Taken from a photo by Lwp Kommunikáció at flickr.com 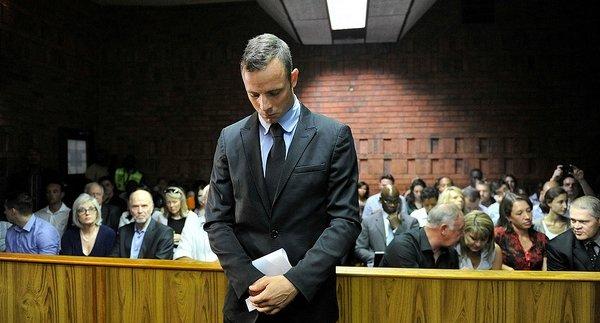 Last month, Oscar Pistorius was convicted of culpable homicide over the death of his girlfriend, Reeva Steenkamp, in February 2013. The verdict came at the end of a long trial, the whole of which was broadcast live on television and debated extensively on social media. Ahead of Pistorius's sentencing on 13 October, South African Jesuit, Fr Russell Pollitt, discusses the impact of the media coverage on public opinion and on the trial itself.

The trial of Oscar Pistorius has been called the ‘trial of the century’ in South Africa. What has made this trial different to any other is the role that media, primarily social media, has played. The ingredients of the trial – celebrity, money, gender, class, privilege, vulnerability, disability and, of course, crime – coalesced into a hotbed of public debate facilitated by social media.

The story of Pistorius shooting and killing his girlfriend, Reeva Steenkamp, broke on Twitter on 14 February 2013, and that medium in particular has been responsible for generating and sustaining a buzz around the developments in the trial ever since. For example, a Pretoria-based journalist who was among the first to break and cover the story, Barry Bateman, saw the number of people following him on Twitter grow from 10,000 in the week before Steenkamp died to over 160,000 during the week of Pistorius’s bail application; at the time of writing he has over 230,000 followers. The streams of information and opinion (or simply the consciousness of those bashing the keys?) that flooded Twitter – from journalists, other interested observers and the general public – were just one dimension of the media storm surrounding this trial.

The news about the trial came in real-time: everything that happened in the courtroom was streamed live, day in, day out. There were no court artists to draw their impressions of the trial and newspaper journalists were left behind as every minute of court procedure was reported on social media. Most radio stations had special programming and coverage, and South Africa’s pay TV network, DStv, established a dedicated channel, ‘The Oscar Pistorius Trial’, to cover the proceedings. The intricate details of personalities, lives and the events of that fateful night were all revealed, frame by frame, tweet by tweet. At one point, while the trial was underway, Pistorius himself turned to Twitter to try to defend himself and, as some thought, invoke public sympathy. He suggested that God knows the truth and he relies on God. But nothing was private – or sacred – in this trial.

The coverage of the trial and the way in which social media platforms influenced, if not dominated, the public discourse, have opened up a number of questions regarding the broadcast of court proceedings. There are two that seem to be asked frequently: how did the media influence the public and their opinions, and what was the impact of the media on court proceedings and the evidence that was presented?

Most journalists sitting in the public gallery of the courtroom live-tweeted the progress of the trial; and not just that, but also comments that they had overheard, and their observations about the actions and reactions of people in the court, especially family members of the accused and the victim. Twitter afforded journalists the space to tell the anecdotes that TV cameras, radio mics and newspaper print could not relate. It was also interesting to note how many reports on TV, radio and in newspapers used Twitter as the source for – and subject of – their coverage. The Oscar Pistorius Trial channel often asked their studio guests for their thoughts on what was being said on Twitter, as this was how they could best tap into public opinion. This means that the debate was often directed by what the public was talking about and not by the actual legal proceedings.

This is important because public perception was then, in turn, driven by what was considered to be analysis of the trial, but was often analysis of public perception itself. In addition, the demand for immediate information about the trial created a supply of blow-by-blow accounts of the trial and emotional reactions, but with little explanation. It seemed as if as much social media chatter was devoted to the courtroom behaviours of Pistorius’s defence advocate, Barry Roux, and later the State prosecutor, Gerrie Nel, as it was to the ins-and-outs of the judicial process. Most folk (journalists included) who engaged on social media and offered comment on the proceedings and the key players are not themselves legally competent. The fast-paced reportage and debate meant that important legal intricacies could have been lost for those who are not legally trained and, therefore, the justice system and the processes of courts in South Africa misunderstood.

There is another phenomenon worth noting. Statistics by Data Driven Insight show that the level of public interest over the course of the trial was inconsistent. Interest peaked during Oscar Pistorius’s testimony and decreased particularly during the testimony of other defence witnesses. It is also interesting to note that the more technical the testimony, the less activity there seemed to be on social media and elsewhere online. The lack of interest during these periods extended to the broadcast and print media. Yet, people still came to strong conclusions about the judge, the legal processes and the dispensing of justice, based on what they had learnt from the media: everyone thought they were an expert, however erratic their direct exposure to the trial had been.

Did the huge media exposition of the Pistorius trial do greater harm than good? The answer, I think, is no. There were times – such as when pictures of the gunshot wounds on Steenkamp’s body were shown in court and then sent all round the world – when the necessity of this graphic detail could be questioned. Journalists live-tweeted the pictures as they appeared on the courtroom monitors. Some observers raised ethical question around this, and others questioned if such broadcasting was fair on the family of the victim. In many ways, however, the broadcasting provided South Africans, and people all over the globe, an opportunity to learn about how the justice system in South Africa operates and how some of the more technical aspects of law are applied, even if that opportunity was not always taken. There certainly are many questions about the administration of justice in South Africa, and there are South Africans who do not have confidence in the justice system: this case, in a way, put the justice system in South Africa on international trial. Many people learnt something about the burden of proof, for example, and now some people have a cursory understanding of complex principles of law such as Dolus Eventualis – which was even a trending topic on Twitter as the verdict was being delivered! The extension of the courtroom public gallery to our smartphones, tablets, PCs and living rooms drew people into the events that unfolded in court but also taught many something about the law in action.

A repeated criticism of the vast media coverage was that it presented witnesses who were yet to take the stand with information that they would not have otherwise seen or heard. Some commentators raised concerns about the authenticity of accounts given by witnesses who had already heard what was being claimed – or not – in other testimonies. One witness admitted to following proceedings through the media before testifying, and paying particular attention to the statements of other witnesses whom they were supposed to either agree with or dispute. This leaves a question about just how reliable such evidence could be, and even whether witnesses tailored their accounts.

Another question that many people ponder is if the judge, Justice Thokozile Masipa, was swayed by the media coverage. Despite widespread criticism by legal experts, the judge’s conviction of Pistorius for culpable homicide (as opposed to murder) does not seem to have been affected by the media. After her verdict, many people turned to social media to express themselves, and some suggested that Masipa was incompetent and did not understand the law. But this is not altogether new. Judges’ decisions are challenged from time to time through due processes. What made this different was that Masipa’s judgement was questioned broadly, on social media, before it could be interrogated in a court of law… even before she had finished delivering her verdict! It was encouraging, though, to see that in the days following the verdict, a good amount of learning took place, as experts tried to explain what the judge had ruled and why she did so.

Pistorius had, in the past and even after killing Reeva Steenkamp, drawn negative press around his drinking habits, partying and temper. Judge Masipa made no reference to these and drew no inference about his mental state from such stories.  She ordered an evaluation of his state of mind based on what was brought before the court and through the processes that should be used by a court in South Africa. The trial broke for a month after she ordered that Pistorius undergo psychiatric observation.

Judge Masipa handled the media and the coverage of the case well. She seemed to keep her nerve and remained unimpassioned by the daily barrage of information in the media. She was firm when she needed to be, especially when she felt that journalists had overstepped the mark. When, for example, the footage of Oscar Pistorius’s re-enactment of the events of 14 February 2013 was leaked by a production company contracted by Pistorius and his defence team, Masipa and the entire legal team understood that the footage, despite what it showed, was protected under client/attorney privilege. There is no evidence to suggest that this influenced her verdict. Justice Masipa treated the media coverage as an extension of the courtroom gallery. Her expectation was that the media behave like anyone else in the public gallery and that they be held to account, as would anyone who was observing the case in the courtroom.

The Pistorius trial was unprecedented not simply because of who the defendant was or what he did, but because we have never seen social media used so extensively in a court case before. This was a prime example of the way in which social networks are shaping the way we do things and the way information is now disseminated and accessed: their real-time global reach means that any information can, in a few seconds, be up for grabs universally and that anyone can add their bit, thus making the line between observers and participants rather fuzzy. There is no doubt that, next week, the world will again turn to the tweeters, bloggers, Facebookers and Instagrammers when Oscar’s fate is decided. This time round social media may not have interfered in the administration of justice, but in future it may not be this simple.

Russell Pollitt SJ is director of the Jesuit Institute South Africa based in Johannesburg. He did studies in theology and media and has a keen interest in the effects of social media on spirituality. You can follow him on Twitter: @rpollittsj

Values for the Media – Part One