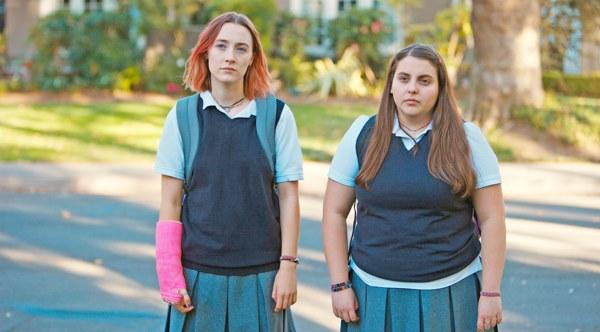 In Greta Gerwig’s solo directorial debut, the marvellous Saoirse Ronan fully becomes Christine ‘Lady Bird’ McPherson, a 17-year-old in her senior year of high school and dealing with all that entails: relationships, college applications, family tension, friendship adjustments, curricular and extra-curricular activities. To say the film is about no more than that is not an insult, because its achievement is in making all of that powerful, relevant and consoling.

I left school in the same year as Gerwig, 2002; Lady Bird fictionally graduates (from an all-girls Catholic school in Sacramento, California, just like Gerwig) a year later. The 5,000 miles that separated me geographically from both of them undoubtedly placed a cultural and educational distance between our experiences, too, but nonetheless there is a comforting familiarity in so much of the aesthetic of the film – the soundtrack, the fashion, the technology, all rendered perfectly. Those were of course the early days of the post-9/11 era, which is not ignored – a tribute to the victims on a classroom wall, a couple of offhand references to the threat of terrorism in New York – but does not register on the day-to-day scales of Lady Bird’s life. Which is not to say that the film is socially or politically ignorant. The beginnings of an economic crisis and a rise in unemployment slip onto Lady Bird’s radar and so are addressed to the extent that they contribute to shaping her life. In fact, they prompt her to realise that she is not and cannot be the only thing that matters in her own life. There is something here about the realisation of one’s own agency and a simultaneous discovery of empathy with and responsibility towards others that carries a loud echo of Catholic Social Teaching. It suggests that Gerwig’s (and Lady Bird’s) Catholic education was formative, and it gives a depth to the film such that when Lady Bird’s teacher, Sister Sarah Joan, tells her that love is really about paying attention, it is more than a soundbite. There is a Catholicity to this film that goes far beyond nuns measuring school-skirt lengths and Ash Wednesday Mass.

Gerwig has done an excellent job as both writer and director: the script is sharply observed and cuts a refreshing path that avoids cynicism and melodrama as it deals with its subject matter – teenage angst, essentially; and the film is crafted such that it resonates emotionally with its audience without being cloying. In a sense, it’s Juno without the teenage pregnancy, and all the more important for that, because in telling a story without a big event it explores and emphasises the value and dignity of who someone is – particularly a female someone – without relying on headlines to define them. Stories like this don’t often get told, Gerwig said to the New York Times, because in an industry where too few people observe the female experience, ‘People don’t understand that they’re even a story to tell’. It is sensitive to the last, and it simultaneously measures and corrects the degree of importance that teenage girls attribute to things.

If the film has a theme, maybe it is how much each of us knows about the story of our own life and how we tell that story. Even Gerwig’s relationship to the film is interesting on that level – see that New York Times interview again, in which she describes her reaction to the suggestion that the film is autobiographical: ‘Do you know my autobiography? How do you know that this is autobiographical? That’s a leap!’ She places some thought-provoking comments into her main character’s mouth, which allude to some of the ways in which knowledge of even our own experience is complicated. ‘I remember from the pictures’, Lady Bird says of a childhood holiday, a suggestion of how we sometimes let our ‘memories’ be fed to us and then take ownership of or appropriate them. And later, after learning something that changes her understanding of a big life event, moments after it has occurred: ‘I just had a whole experience that was wrong’. How does the unsettling revelation that our version of events deviates from the ‘right’ version, affect our self-understanding?

Lady Bird’s relationship with her mother (expertly played by Laurie Metcalf) is central to the film. In that sense it could be seen as a teenage sequel to Gillian Clarke’s poem, Catrin, with Lady Bird’s desire to go to an East Coast college the equivalent of Catrin’s plea to ‘skate/In the dark, for one more hour’: a request the weight of which the child cannot at the time appreciate. Both poem and film find the truth that love is not without sacrifice or struggle. Lady Bird invites each of us to look back at times in our own lives when those trials might have obscured our view of the love that was at work amidst them.