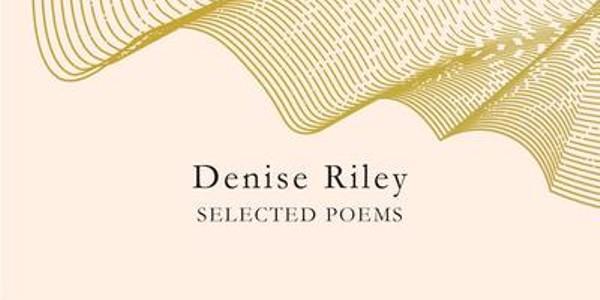 Denise Riley was Professor of the History of Ideas and of Poetry (a wonderful title) at the University of East Anglia and has taught in many places in the USA and continental Europe. She has been Writer in Residence at the Tate Gallery and her trade includes philosophy. The poems selected in this collection come from six books, starting with Marxism for Infants (1977) and ending with the well-received Say Something Back (2016).

In Dry Air (1985), which has delightful versions of three poems by Hölderlin, the poems do much good, hard work. ‘The ambition to advise speaks’, as does ‘The ambition to be not particular’. These are pointed titles – poetry should not float free or become a problem solver. The speaker of the poem, ‘What I do’, discovers “I am in several cupboards” and concludes as “A crack of light falls round me.” This precise and tentative illumination matters more clearly than a ray of sunshine. Certainly, Riley knows the discerning need “not to think yourself happy until you are”. Waiting attentively is a virtue in life and language. Of his now almost fashionable phrase ‘negative capability’, John Keats writes that there should be no “irritable reaching after fact and reason” or – I take it – after poetry. And Riley does not search ‘irritably’ – in her words there’s a search for words ‘cooled / to the grace of being common’. This ‘grace’, holding together both personal and public, seems to me to be integral to life and to the also mysterious and difficult business of making poetry. ‘Common’ here is by no means a diminuendo word.

More sharply in ‘True North’ from the later Mop Mop Georgette (1993), in which the body “houses a needle”, Riley finds there is a “Sliver of outside that I cradle inside and which guarantees me my life also.” There are many hurts outside and inside. We’re told in ‘Seven Strangely Exciting Lies’ that “…through these // opened and reopened mouths that form / the hollow of a speaking wound, we / come to say, yes, now we are Illyrian.” There are goosebump gestures: “In my breathing cell I smooth down my own cloak of / nettles…” (from ‘Well all right’). The poem ‘Wherever you are, be somewhere else’ ends with: “ – And I can’t do this. I can’t talk like any of this. / You hear me not do it.” So in a long poem, ‘A shortened set’, although “The ex-poet’s beside herself”, the positive ending isn’t faked: “In a rush / the glide of the heart / out on a flood of ease.” Indeed we can’t get there before we do, hence Riley’s struggle with “the doubter’s rhyme”.

All the poems in the 2016 volume Say Something Back are reproduced here, which suggests a good economy for the buyer. The title might work as a good reminder of the instruction the prophet Hosea records: ‘Take words with you’ (14:2, [NRSV]), which could fit many contexts. So it is doubly appropriate that Riley uses the making of poetry as a kind of research tool for responding to, for example, war graves and the linked rituals of death (‘A gramophone on the subject’) and medicine (‘The patient who had no insides’). Poetry is, among many things, an affair of exploration, record and creativity.

The rightfully long poem ‘A Part Song’ concerns the death of her son, Jacob – no longer a child at the time – a tragedy that really cannot be taken in and dealt with.[i] “How should I take in such a bad idea. No, / I’ll stick it out instead for presence.” Though later in the poem – strangely, delicately and maybe uncertainly – “It’s all a resurrection song.” The mysterious and difficult business of getting to this point is sharply noted in ‘Catastrophic thinking’ where we discover “Darkness absorbs any mind, once / it starts calling itself ‘unwanted’.” At such times – in ‘Never to disinter the pink companion’ – it seems “Grace” may come “smiling, to / me mulish with a little scar literature, it is a very late form of love.” So we find in ‘You men who go in living flesh’,

Hope is an inconsistent joyYet blazes to renewIts lambent resurrections ofThose gone ahead of you.

There is some real Christian presence here, which functions in life and in the integral element of life that is poetry. It is the kind of faith that does not miss its mark and become a purveyor of false consolation or a distraction from what is real: “Read from the hymnal of frank life – of how / to be old, yet never to rehearse that fact cosily” (‘Tree seen from bed’). In Mop Mop Georgette there is a piece of gospel wisdom: “Die deeper into life at every second.”[ii] So the appropriate and surprising prayer in Say Something Back is “… Hymns ancient / & modern, buoy us up / though I am faithless” – from ‘When we cry to Thee’.

The poems – sometimes, in a good way, difficult to read – are refreshingly sharp, rigorous, surprisingly lyrical, truth telling and deeply worked. It is good to have the Notes, which give references to the music, lyrics and poetry that are part of the selection’s hinterland.

A number of poems, such as ‘True North’, are printed at right angles to the usual orientation, no doubt to accommodate lines longer than usual. Here the pages obey the poetry… and the poetry hears the experiences. However, the table of contents puts ‘Letters from Palmer’ on page 47, whereas the poem actually appears on page 49 – a slippage of two pages that persists throughout the volume. Nonetheless, the subtitle for ‘Seven Strangely Exciting Lies’ is ‘Take two of these tablets tonight and in the morning go on living’, so pagination problems, unlike the poetry, are best taken as small beer.

[i] There is an account of the experience of being thus bereaved in, Time Lived, Without Its Flow, 2012. Jacob died in 2008. The dedication in Say Something Back is ‘For my friends, and for my children: Rose, Laura, and remembering Jacob’.

[ii]  This looks like a fine take on the gospel saying: ‘For those who want to save their life will lose it, and those who lose their life for my sake, and for the sake of the gospel will save it’ (Mark 8:35; see also Matthew 10:39 and Luke 9:24).

Zealot: The Life and Times of Jesus of Nazareth