Skip to main content
Photo by Chris Wilson at flickr.com 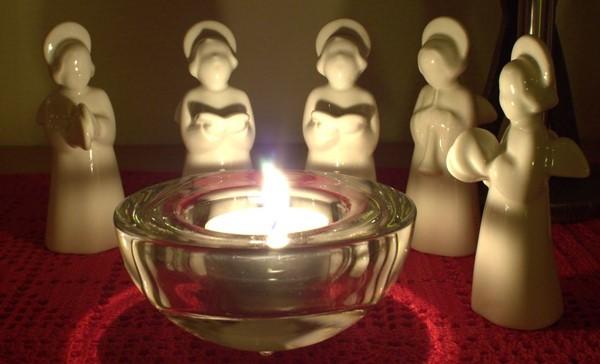 Advent has many musical traditions which, along with so many other things, will not be able to be performed as usual this year, but we can still let the hymns of the season be the soundtrack to our prayer and preparation. Frances Novillo offers some practical advice on how we can tune our ears to the presence of God this Advent, and encourages us to let the differences in our liturgy be signposts to the spaces where we can encounter God with us in the reality of our lives.

In a year of significant losses affecting relationships, health, freedom and finances, lesser losses may have passed us by, but I noticed when my supermarket stopped playing background music in favour of silence and announcements about Covid-19 protocols. In 2020, people lost touch with music, spending less time in social venues where background music is usually played. Concerts and festivals were cancelled, and sports grounds usually resonant with tremendous chanting fell silent. Even buskers were discouraged from performing for fear of crowds gathering. Congregational singing has been prohibited for some months now, and the liturgical contribution of choirs and cantors limited, not least so that worshippers are not kept indoors together for too long.

In the season of carol-singing, permission granted to sing together outdoors is welcome and may highlight the presence of God beyond church walls, God who is with us wherever we are – Emmanuel. Perhaps you can already hear the carols in your head? Because, bidden or unbidden, snippets of hymns may come to mind as small reminders of the enduring presence of God. Such memories offer hope and aid perseverance. In unwelcome silence when company is missed; as new patterns of prayer at home develop; in now intimidating or infuriating environments like crowds and queues where calm is sought, we might find ourselves humming and realise it’s the Salve Regina, or Make me a channel of your peace, or something else oft-repeated in Catholic liturgies, resonating even now although it cannot be sung in company by government decree.

Some of the unexpected changes of 2020 led to surprising discoveries. Parishioners of all ages learnt to participate in worship remotely, and a huge number of Christians and non-Christians watched online services and joined the record-breaking Google search for prayer. Even where neighbours never previously conversed, local WhatsApp groups and clapping for the NHS connected people to each other. This is Emmanuel in action, not only with us as we are, but coming to make all things new (Revelation 21:5).

Emmanuel expresses the eschatological paradox: the kingdom is here and the kingdom is coming. Jesus has come, is with us, and will come again – Emmanuel and Maranatha – come, Lord Jesus, come. As the worship song by Naida Hearn reminds us, Jesus is the name above all names, and Emmanuel, God-is-with-us, is his name most commonly associated with Advent and Christmas. This theme inspires the hymns of the season.

Some hymns such as Peter McGrail’s Bright and clear / Lord Emmanuel , come, express Emmanuel breaking through dramatically, manifestly Christ the King, named as such in Hillsong’s Emmanuel. Emmanuel also embraces the kenosis of Philippians 2:5-8, reflected in hymns such as Matt Osgood’s On Christmas Day and Frank Houghton’s Thou who wast rich. The latter explores Emmanuel transforming and shaping, making ‘us what thou wouldst have us be’. Emmanuel embraces all our hopes and fears, according to the Christmas carol O little town of Bethlehem, as God becomes fully human in Jesus. Emmanuel offers himself as a gift, received by Mary at the Annunciation (narrated in The angel Gabriel by Sabine Baring-Gould) and shared with everyone as expressed by Marty Haugen in Come to us / Gift of God. Huub Oosterhuis’s poetic lyrics in The Song of God Among Us acknowledge that the almost imperceptible presence of Emmanuel can go unrecognised, a sentiment echoed by John L. Bell in the chant There is one among us. Emmanuel is the gentle God of the Rorate Caeli, and of Graham Kendrick’s Like a candle flame / God is with us. Combining many of these Emmanuel themes is the beautifully-crafted modern hymn Sing we the song of Immanuel by Matt Boswell and others.

How may such a wealth of wonderful hymns be used while restrictions prohibit their communal singing in the conventional manner?

Participating from home in a broadcast Mass permits worshippers to join in singing with the choir, cantor, clergy or a recording, or to participate by listening. Priests uncomfortable leading sung worship solo, or singing to camera in an empty church, may welcome the idea of simply singing one verse from O come, o come Emmanuel at each Mass, drawing attention each week or each day to the lyrics of each stanza. There is a perennial debate about when that hymn should be sung, with some liturgists insisting convincingly that it should not be sung before 17 December as it summarises the O Antiphons set from that date onwards, although that significantly limits the occasions on which Sunday worshippers would hear a hymn which arguably sums up the sound of the whole season. Bishop Robert Barron was not averse to mentioning it in his sermon for the first Sunday of Advent this year, which wasn’t even in December!

Where congregations meeting in person are prohibited by Covid-19 restrictions from singing, incorporating a well-known hymn into Mass may tempt people to break the rules by joining in, or feel frustrated and disappointed that they can’t. A local remembrance service this year reminded those present that the National Anthem would be a ‘Recording Only: Do not sing’. Such instructions do not ease liturgical flow. To prevent not singing in liturgy becoming a habit, and to avoid having to interrupt a song should the congregation join in singing in contravention of the rules, this year it may be better to reference well-known songs rather than including them in any conventional form. For example, instead of expecting worshippers simply to listen as the organist plays all three verses of Hark! The Herald Angels Sing, those lyrics mentioning Emmanuel could be quoted, then the organist might improvise around the familiar tune, guiding reflection without encouraging illicit singing. Instrumental music accompanying the actions of the Mass (such as the preparation of the gifts or cleaning the vessels after communion) does not unduly lengthen the liturgy, but referencing familiar hymn tunes in instrumental music can focus worshippers’ minds and prayers on seasonal themes. Instrumental music can enrich Masses suffering the loss of communal singing, movement and variety of spoken voices.

A spoken or sung response to prayers is most appropriate when churches are full and all worshippers are physically present, but now there are fewer people in church during Mass, it may be time to explore alternative responses, for example, silence or instrumental music. Smaller congregations create less background noise that might obscure the spoken word during Mass, so it may be possible now to introduce sensitive background music to readings and prayers, judiciously selected to enhance the meaning of the words, and understanding that instrumental music should be used only in moderation during Advent (General Instruction of the Roman Missal, §313). Music for The angel Gabriel could accompany spoken prayers, for example, with the ‘Gloria’ refrain played as a response, or the music of the verses of O come, o come Emmanuel played during prayers, and the chorus played as a response, as it is written to modulate between verse and chorus, creating a natural and audible musical change matching the shift between intercession and response. If a talented musician capable of improvising isn’t available, there are instrumental pieces based on the famous O come, o come Emmanuel melody, such as Respighi’s Adoration of the Magi. However, use of recordings should always be well-prepared, since the recording cannot adapt to live liturgy as parish musicians do.

There is a vast amount of recorded liturgical music available online, with bands, choirs, orchestras or simply sung. Many parishes have invited their own musicians and singers to contribute recordings made at home to services held in church. The aforementioned On Christmas Day by Matt Osgood is a great example of an Emmanuel hymn easily accessible as a recording as well as a video. Sheet music is also available from Resound Worship, so parish musicians can learn the song to use live in future. Within copyright and PRL restrictions, recordings of thematically relevant hymns, with or without videos, may be played before and after a church service online or in person; recordings may be incorporated into prayer meetings and Advent talks, or used within domestic prayer, for example, while lighting candles on the Advent wreath at home.

If novel approaches to hymnody feel insufficient in comparison to singing together in worship, that is not inappropriate for 2020. Daily life is currently constrained and everyone is living with less than they would choose. If worship permits recognition of what is lost, acknowledgement of all that we miss and long for, that is an appropriate reflection of the reality of life. Emptiness, presented to God in prayer, forms an invitation for him to meet with us more deeply, fill us more completely, be more fully present to us as Emmanuel.

Frances Novillo is a workplace chaplain in the Diocese of Arundel & Brighton. She has an MA in Psychology of Religion, practises as a Pastoral Supervisor, and worked for many years as a liturgical musician.

Advent Examen: 1. What do you say?

Advent: Good News for the Poor?