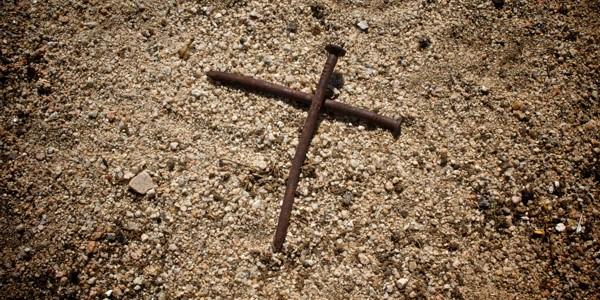 In contrast to the previous Station, which draws our attention to a very particular detail of the Passion that the gospel accounts don’t highlight, the eleventh Station is almost an umbrella for a series of events which are recounted to us across all four gospels. Think of all the details that we are given about the time between Jesus being nailed to the cross and taking his final breath: the inscription of ‘This is the King of the Jews’ above Jesus’s head; the two thieves crucified either side of Jesus and his conversation with them; the wine Jesus is offered to drink; the darkness that covers the land; Jesus’s cry of ‘Eloi, Eloi, lama sabachthani’. We can be sure that the gospel writers intended to tell their audiences something by mentioning each of those things, and indeed scholars and faithful readers of the gospels have found plenty of meaning in each of those factors over the years. Yet the Stations of the Cross take all of them together. Perhaps this is precisely to help us to engage with the one fact: Jesus was nailed to the cross.

Jesus was put to death. The authorities had Jesus killed. We can put it in simple language, without interpretation or elaboration, but the content is anything but simple. All that Jesus has said and done that has led to this point is viewed forever more in the light of the consequences of this one act of violence: Jesus was nailed to the cross.

It seems obvious to say so, not least in the context of this Station, but Jesus was not well-received in his own time. As children, we learn that Jesus used parables to deliver his teaching so that the people of his time could relate to a story, and easily understand and accept what Jesus was saying. But as we mature, the reality becomes clearer: the people who heard Jesus neither understood nor accepted what he was saying, far from it: Jesus was nailed to the cross.

The reaction of the people of Jesus’s time to him imposes upon us a responsibility to discipleship. We are not exempt from living according to his law just because it wasn’t delivered to us couched in stories to which we can relate – most of Jesus’s hearers didn’t relate to them, either, but he certainly wanted them to change their lives. We cannot say that Jesus tailored his message to first century Palestine so that only the people of that time and place needed to abide by it because, by and large, they didn’t. If we allow it to be, the clean-cut fact at the heart of this Station is a reminder that the gospel message is universal because it does not suit anyone, it demands something of everyone. One size fits all precisely because one size fits none.

If that seems like a riddle, it is. So much so that G.K. Chesterton articulated it in an essay called ‘The Riddles of the Gospel’:

This Station collapses into a single statement under the weight of the myriad details that make it up. Likewise, the questions and difficulties of everyone who has struggled to understand and live according to the ideas of Jesus over 2,000 years make one thing very clear: there is a cost of discipleship. Many people have paid that cost with their lives, and we take them with us in our prayers to the Jesus who was nailed to the cross.