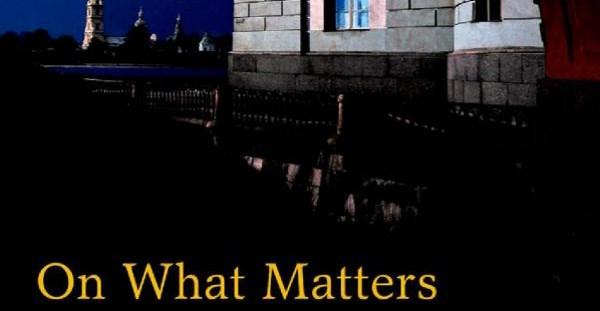 It is four years ago this month that Derek Parfit brought out his two-volume work, On What Matters.  The length of the text alone may appear intimidating and the content – an extended discussion of Kantian ethics in the British analytic tradition – specialised.  Even if you do not engage with it directly, I believe it is a work that all Thinking Faith readers can usefully know about, and so in this review I highlight some of the reasons why I believe this book is important.  (I cannot do full justice to the wide-ranging content here, so I would point you to a (personal) digest and commentary for more of the detail.)

Public debate between secular authorities and the Catholic Church over the last decades has been dominated by clashes between the defenders of secular laws or proposals and the defenders of the moral rules upheld by the Church.  There is nothing intrinsically bad about this – indeed, it is to be expected at times.   However, the clashes have on more than one occasion revealed a worrying lack of coherence on both sides about the relationship between reason, rules and humanity.  When this happens, it is largely because of the lack of a common, thought-through basis for ethical argument, and this leaves otherwise intelligent and honourable adversaries shouting at an Aunt Sally rather than respectfully working things out with their opponents.

Religious people can find themselves accusing others of godless relativism, while non-theists will in turn accuse their opponents of prioritising primitive sacred law above common humanity.  There is justification for both accusations.  Many modern people do believe that at least some ethical rules are culturally relative, or even that (at least in some areas of their ethical lives) they are entitled to do whatever they want.  Equally, most religious believers believe that there is a deep connection between faithfulness to God and obedience to the rules of the tradition, and some believe that it is impossible to be faithful to God and question any of those rules.  However, any non-theist who founds an argument on common humanity is already taking a decisive step away from a pure relativist position.  Likewise any theist who acknowledges the importance of the will of God in ethics has implicitly relativised the particular, historical expression of a legal maxim before a deeper, transcendent reality.

At this point our attention is drawn away from rules as the ethically absolute (or not), towards what lies behind any given rule.  There are things that matter, and these give us our ultimate reasons for following, modifying or ignoring a rule.  This is just the territory that Parfit explores, from a non-theistic perspective.  As he does so, he offers the beginnings of an alternative to the tumbledown edifice of inherited natural law theory, pointing towards a new framework for ethical reflection accessible to theists and non-theists alike.

Parfit is working within the analytic tradition, notorious for its preference for fine-tuned argument, technical language and logical formalism over common human concerns and accessible text.  Nevertheless, fine-tuned arguments are not to be sneezed at if we are to think well about important things.  Happily, one of the attractions of Parfit’s work is that he manages not only to produce such careful argument, but he writes with refreshing lucidity and elegance and throughout treats ethics, like an ancient philosopher, as central to philosophical thought, a way of helping us think better about how to live together in the universe.  His broad focus is the nature of practical reasoning: working out the right thing to do.

The first volume of his work discusses, criticises and develops Immanuel Kant’s insight about the nature of practical reasoning.  Kant’s famous ‘categorical imperative’, though fiercely abstract, highlights important characteristics of an ethical maxim or rule.  Consistency is important – it must be the same for everyone – but more importantly, it must respect other practical reasoners.  That is to say, any ethical choice must take into account what those affected by it could reasonably consent to.   Out of this, Kant develops a model of ‘universal, rational consent’.

Parfit’s Kantian critique is preceded by a ground-clearing discussion with thinkers who believe that our reasons for action are ultimately given by the desires that we happen to have.   In the genealogy of ethical thought, this line leads back to David Hume (to whom Kant was reacting).  Parfit suggests that if this were the case, then nothing would matter.  The fact that we like ice cream is an accident.  If our only reason for rescuing a fellow human being from death is because we want to, then that reason is as accidental as our reason for buying an ice cream.   The death of a fellow human being would not matter independently of our desire.

Parfit suggests that we can reject the view that ultimately nothing matters, because the relationship between reasons and desires on which that view is grounded is logically mistaken.  Facts of the matter give us reasons (including reasons to desire something), rather than reasons coming from our de facto desires.  He will return to this key theme in the second volume.

A second strand of debate uses some of the groundwork of the Cambridge philosopher Henry Sidgwick.  Sidgwick identifies two fundamentally different strains of reason that we can have for action: reasons relating to rational self-interest and reasons relating to a disinterested concern for others.  For Sidgwick, these are two rational principles doomed to eternal conflict.  Parfit, however (and in this he is like Kant), sees occasional but no essential conflict.  Good, ethical decisions can entail self-interest just as much as they can the disinterested concern for others.  This indeed is what he explores in painstaking detail through a series of thought experiments, as he tries to tease out the wide range of things (including religious beliefs and ethical certainties) that give us reasons for acting one way rather than another.

Finally, in the first volume, he suggests that the various different approaches to practical reasoning of the last two hundred years are not as polarised as we imagine.  Each contains important insight into common elements of practical reasoning, whether Kantian theories, consequentialist theories (the moral value of an act is judged according to its outcomes) or contractualist theories (morality is about what rational agents can agree to).   All, Parfit suggests, are trying to climb the same mountain from different sides.  He suggests that his reason-based, ‘Kantian contractualism’ is the sort of theory towards which the others are all tending.

The first part of volume two is taken up with his response to criticism of his position by fellow philosophers (including several who support desire-based reasons).  The final part – and in some ways the most stimulating – explores the metaphysics of ethics and ethical reasoning from a non-theistic perspective.  He discusses a number of different philosophical attempts to re-establish a sort of natural law by finding ways of identifying the ‘is’ that we observe and the ‘ought’ that we claim on the basis of what we see (Ben is poor, therefore I ought to help him).  Parfit rejects these attempts and argues instead for a view that he calls ‘alethic realism’, preserving a distinction between natural and non-natural descriptions of the world.   This is his crucial justification for why things matter in a universe that has a natural order, but no all-powerful, personal deity.  It is what allows us to say that ethical statements can be true or false.

Parfit argues for his view by analogy.  We already have a capacity to acquire true beliefs that are not about the natural world.  These include the necessary truths of mathematics and logic, predictions about what may happen in the future or about things which are far removed from our direct experience.  Normative (ethical) truths are like these.  Such truths do not refer to any existent entities, yet they are bound to the facts of nature and are a part of the reality that we can know.  What enables us to know them is the capacity to reason that we have acquired by normal evolutionary processes, but which, once acquired, has taken us in a direction that transcends those same evolutionary processes.

This conclusion seems abstract, but it is radical and a potential game-changer in the dialogue between faith and reason and the search for the foundations of value.  Parfit sets it against the backdrop of a discussion about the origins of the universe, the future of humanity and what it means to live well.   It is founded on the reverence, which he shares with Kant, for humans as beings with the capacity for reason.

We can recognise here that this capacity for reason – which includes the recognition of value, which is bigger than us individually and which sets us in a special, privileged relationship with the wider reality of the universe – takes us close to the fruitful, ancient idea of the logos.   The universal reality of the ‘word/reason’ was central to the philosophical tradition that moulded Jewish thought and that provided the basis for the philosophical articulation of Christianity.   Parfit has surprisingly taken us there in a modern intellectual idiom that is often presumed to be innately hostile to faith traditions.   This, it seems to me, is potentially a great service to theists and non-theists alike who are concerned about the framework for debates in ethics.

There are certainly points where readers will disagree.  Committed subjectivists would be unlikely to abandon their position, though I find Parfit’s argument very helpful.  He has latched onto something intuitively plausible, that however attractive subjectivist positions may be to those who make the intellectual presumption of scepticism, few can coherently live as if they were true.  At the other end of the spectrum some people will be unhappy about the subordination of moral and religious beliefs to the wider process of practical reason.  They may be tempted (mistakenly) to see this as a form of relativism, especially if their dominant image of morality is of a divine code of law.

Some might argue that Parfit spends too little time reflecting on ethical character and the implications of education.  Though he speaks of ethical progress, as a process of increasing universalisation, he does not give a rich account of why this happens or how it ought to happen.  Nor does he provide a narrative for moral failure and redemption.  His arguments concerning evolutionary ethics will probably not convince determined evolutionary ethicists. However, this is more because evolutionary arguments are protean and can adapt to every challenge (by imagining for every x a way in which x might have conferred an evolutionary advantage, which is usually possible).

All in all, this is an important book.  If taken up it could be as helpful to the quality of our thought about practical reasoning and law-making as Alasdair MacIntyre’s After Virtue has proved, thirty years on, to our thinking about character, education and culture.   If you are comfortable reading analytical ethical text, I would heartily recommend that you give it a go.

The reviewer, John Moffatt SJ, assists in the Hurtado Jesuit Centre in Wapping, East London. He is the author of The Resurrection of the Word: A Modern Quest for Intelligent Faith (The Way) and Letting the Porcupine out of the Bottle.

The Virgin Eye: Towards a Contemplative View of Life