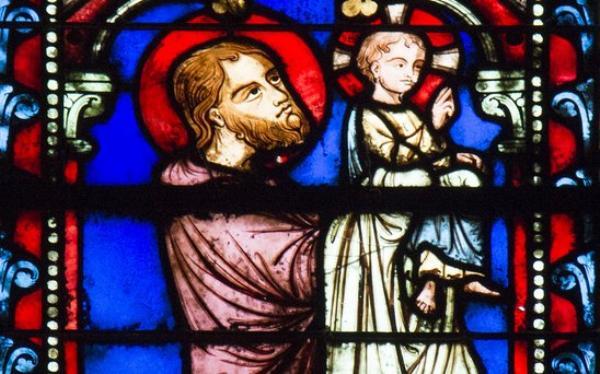 The gospel reading from Matthew for the Fourth Sunday of Advent is the evangelist’s account of the birth of Jesus, which focuses on the role of Joseph.  Nicholas King SJ asks us to pay attention to the context in which this passage is found in the gospel – our understanding of Joseph’s fatherhood of Jesus depends on it.

The gospel reading for the Fourth Sunday of Advent this year is Matthew’s account of the birth of Jesus. It is rather different from Luke’s version, which we shall be hearing at Midnight Mass on Christmas Day.

Before looking at the text itself, we need to be aware that it comes immediately after all those ‘begats’ (‘Abraham begat Isaac and Isaac begat Jacob, and Jacob…’) in the Prologue that Matthew has given to his gospel. Some people claim, insensitively, that this is the most boring bit of the New Testament; they miss the point that Matthew is making here, for those who know the code (which will have included Matthew’s first listeners). Matthew’s message is conveyed in the three groups of fourteen names into which the genealogy is divided: Abraham to David, David to the Exile, Exile to Jesus. The message is, quite simply, that Jesus is the fulfilment of all of the promises of God, whose fidelity has unfailingly guided Israel all through the painful, and at times sinful, history of God’s beloved people. We need to have that firmly in mind before we listen to the gospel reading this Sunday.

In the passage we hear, the first thing to notice is that Matthew connects this episode quite firmly to the first line of his Prologue, using the word ‘genesis’ (which your translation may have as ‘birth’). He is telling us, that is to say, that what we are about to hear is linked to the understanding of Jesus as the climax of Jewish history.

That enables us to ride out the shock in the next sentence, which tells us that ‘when his mother Mary was engaged to Joseph, before they had come together, she was found to be pregnant’! In that culture, even more so than in ours, such a thing is not supposed to happen; but while we are digesting the awfulness of it, Matthew gives us relief, telling us that the pregnancy is ‘from the Holy Spirit’. So we know all will be well, even if we cannot at present see how.

Now the evangelist lets us into the mind of Joseph: he is facing a major problem. Immediately our sympathies are with him, when Matthew tells us that he is ‘just’ (or ‘righteous’). This adjective, and the related noun ‘justice’ (or ‘righteousness’) is a very important idea in Matthew’s gospel, from whose readers Jesus demanded, notably in the Sermon on the Mount, that their ‘righteousness/justice abound more than that of the scribes and Pharisees’ (5:20). At the moment ‘justice’ is a matter of ‘not wishing to make an example’ of Mary; it must be said that we cannot be quite clear what would have happened if Joseph had made a public fuss about her pregnancy, but it is at least possible that she would have been stoned to death as an adulterer.

As he saw the matter, of course, he could not possibly marry her, given that she was pregnant by someone else. So what else could he do? He was, we gather, pondering divorcing her ‘secretly’; and the next time that Matthew uses that adverb is in the very next chapter, when Herod summons the Magi ‘secretly’ (2:7): there it is unmistakably sinister.

On the whole, however, we are inclined to acquit Joseph of wanting to do something sinister, and that impression is reinforced when, just as he is pondering the matter, we hear the word ‘behold!’ It might equally be translated as ‘look!’ in your version; but I regret to inform you that many modern versions consider this word to be a waste of space and omit it, failing to recognise that it is a signal from the evangelist that we must pay attention, for God is about to act. Here, the word introduces the ‘angel of the Lord’, who in the Old Testament is often indistinguishable from the Lord himself. We learn that the messenger ‘appeared to him [Joseph] in a dream’, and we know that the message which this apparition will be giving needs to be heeded.

And so it proves; he is addressed as ‘Joseph, son of David’, which once again picks up the genealogy that we have just read. ‘Son of David’ is, moreover, a title that appears frequently in Matthew, often in connection with healing. Then he gets his instruction: ‘Don’t be afraid,’ (this is a standard address in the Old Testament to those who encounter the divine) ‘to accept Mary as your wife’. Then the reason is given, as the reader is reminded of what we already knew: ‘that which is conceived in her is from the Holy Spirit’. This is followed by a fairly obvious statement, ‘she will bear a child’, and then a slightly less obvious instruction: ‘and you are to call his name Jesus’. We need to take this instruction seriously; some feminist scholars deprecate the fact that whereas in Luke’s Gospel it is Mary who is to give the name, Matthew gives the task to Joseph. This is not, however, yet another example of a patriarchal society in which the men seize all the privileges that should accrue to the women; something far more subtle is going on here, for in giving the child a name, Joseph is publicly accepting Jesus as his own. So if you were confused about Matthew spending all that time establishing Joseph’s genealogy, when in fact Joseph was not the child’s father, perhaps now you understand. By accepting the boy as his son, and symbolically taking on the father’s role of naming the child, Joseph gives Jesus all his ancestors, regardless of the biological facts.

Next, the angel gives an explanation of the name of the child, showing a good understanding of the Hebrew. The name ‘Jesus’ means ‘the Lord saves’, and so it is a small leap to indicate his function: ‘he shall save his people from their sins’. That is what we are to remember throughout the rest of this remarkable gospel.

After this, the evangelist offers his own comment, and it is something that he will repeat quite frequently: ‘this was to fulfil...’. Characteristically, this is followed by an Old Testament citation; if (as seems quite likely) Matthew is in polemical dialogue with ‘the synagogue across the road’, all these ‘fulfilment’ quotations are no doubt meant to support an argument that Jesus is in fact the climax of God’s dealing with Israel through history. In the Sermon on the Mount (5:17), we shall be told that Jesus came ‘not to abolish but to fulfil’.

Matthew adds two interesting points. First, he uses the Greek translation of the Hebrew scriptures: where the Hebrew has, ‘a young woman shall conceive’ in Isaiah 7:14, the Greek which Matthew cites has, ‘a virgin’, which fits his understanding that Jesus had no human father. Then, secondly, he adds a translation of the word ‘Emmanuel’, which does not appear in either the Hebrew or the Greek, and is, of course, ‘God with us’. We do not fully discover the importance of this title until we reach the very end of the gospel and hear Jesus tell his disciples, in the light of the resurrection, that ‘I am with you all the days’. It could not be clearer what Matthew means to say here.

Then we watch, with some curiosity, to see what Joseph’s response will be, and are relieved when he ‘arose’ (this is a resurrection word in the gospels) ‘from sleep, and did as the angel had commanded him, and accepted his wife’.

We may well imagine that there will have been a social cost to this brave obedience: many will have observed that Mary was pregnant when she ought not to be, so they will have regarded Joseph as an accomplice in her apparent immorality. So we should perhaps rejoice that Pope Francis, who has asked that we include Jesus’s adoptive father in the Eucharistic prayer, regards Joseph as a man after his own heart. Like our present pope, Joseph is not afraid to do what God asks, even if there is a price to pay in the shock and horror of Good Religious People.

What of us, therefore? How are we to approach the festival that is now just a few days away? Not, I think, by rushing out and enjoying the materialist consumer-fest that has dominated the shops for these several weeks now. Instead, the invitation to us is to do whatever it is we are meant to do, regardless of the cost in terms of other people’s esteem. That is the lead that we have been given by the new Bishop of Rome, who is in the process of discovering that if you answer the call of God you will find plenty of people who will rise up in their wrath and criticise you. Watch him, though, and, this Christmas, watch Joseph; and admire the courage of these two ‘just men’ in doing God’s will, whatever the cost. Christmas is not a celebration of the powerful and the mighty; it is a feast of the poor, and of those who know their need for God.

Four weeks to Christmas: people and places in the scriptures