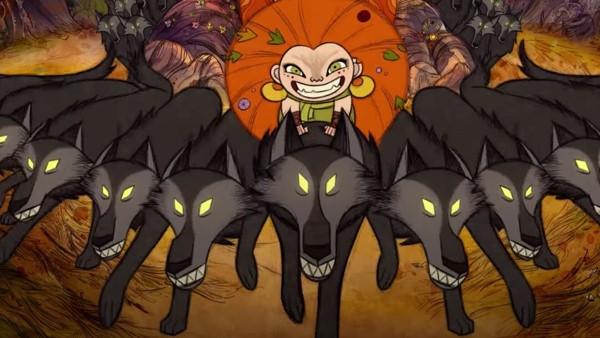 Wolfwalkers is the third in a non-sequential trilogy of films produced by Kilkenny’s Cartoon Saloon that take Irish history and folklore for their stories. The myths at play here are the wolfwalkers of the title, humans who become wolves when they fall asleep. It is gorgeous and its artistry fully thought-through.

Kilkenny in 1650 is a city of points and right angles in a dull palette, ruled over by Oliver Cromwell and his soldiers. Alongside them are Robyn and her father, employed by Cromwell to rid the nearby woods of the wolves that prevent the farmers from advancing their lands. The woods outside Kilkenny are a swirling place of waterfalls and lairs, a watercolour of interlocking swoops and weaves, greens upon greens. From the woods the city appears without perspective, with the houses, churches and castle on the same vertical plane like a tapestry hung on an opposing wall. There’s no way to look around or beyond it. As the townsfolk encroach on the forest they leave their mark behind them in pointed tree stumps and jagged wolf-traps. The craft and thought that has gone into Wolfwalkers is remarkable, the scenes hand-drawn, then scanned, adapted and printed, drawn again and coloured by hand. The high point are the scenes in ‘wolf vision’, the animal smells of the woods transmuted into bright eddies that the wolves chase.

For Robyn the woods are a place where the daydreams with which she occupies herself could come true – adventures of hunting wolves with her father, free of the drudgery of being a motherless girl keeping house. The exposition between her and her father plods at first: she’s to keep safe and do what she’s told for her own good, she scowls and we know she will be out of the door as soon as her father is gone. Just like her, we feel that we’ve heard this all before. It’s her encounter with the girl Mebh that electrifies both her and the story. Mebh, a wolfwalker, is voiced by Eva Whittaker into feral and brilliant life, ‘running and eating and messing and climbing’. Opposed to them is Cromwell, the Lord Protector who preaches to the townsfolk ‘the Lord’s will’.

There’s historical fact behind Wolfwalkers. In 1653 a Declaration touching Wolfes was issued from Dublin calling for ‘the better destroying of wolves…all such person or persons, as shall take, kill, or destroy any wolfes, and shall bring forth the head of the wolfe…shall receive the sums following, viz., for every Bitch wolfe, six pounds ; for every Dogg wolfe, five pounds; for every cubb which prayeth for himself, forty shillings; for every suckling cubb, ten shillings…’ These wolves were both genuine menace and convenient metaphor for the resistance to the colonisation of the island: Cromwell’s mission was to quell and civilise. A hundred years later the wolves were dead. In Wolfwalkers the wolf is a symbol for uniqueness, for weirdness.

The real drama in the film comes not from historical fact or fantastical beast but from the childhood jeopardies that pursue Mebh and Robyn. The emotional range is similar to the second film in the trilogy, Song of the Sea (which told the myth of another shapeshifter, the selkie), with terrors and joy at stake: the lost parent; the betrayed friend; the caged desire. Over the horizon recedes the dream of the good family. Entwined at the heart of it, this ecstatic friendship.