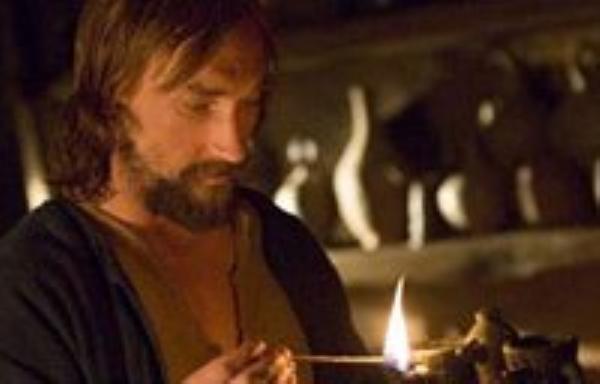 Those accustomed to complaining about the dwindling representation of Christianity in public broadcasting were delighted to hear of the BBC’s plans to broadcast a major new production of The Passion this year, throughout Holy Week, at peak time on BBC1.  Ged Clapson saw the preview and assesses whether it lives up to expectations.

Last night, I had the privilege of attending the Premiere showing of part one of The Passion, the BBC’s epic multi-episode production for Holy Week. And it was, undoubtedly, a privilege. All the big guns were there – from both the media and faith communities. Bishops and heads of media relations from all the major denominations, senior management from the BBC, including Stonyhurst-educated Director General, Mark Thompson, and the award-winning team of writer, director, producer and cast from the production itself.

The mood was apprehensive and anticipatory but positive from the outset. Jane Tranter, the BBC’s Head of Fiction (oops, perhaps not such a good start!) set the scene, stressing the Corporation’s recognition of the enormous challenge that turning the last week of Jesus’ life into a drama presented them with. She praised – with justification – the writer, Frank Deasy; the producer, Nigel Stafford-Clark; and the director, Michael Offer. But she was also at pains to credit the theological advisers they had worked with, including the BBC’s Head of Religion and Ethics, Michael Wakelin.

Throughout the long process of turning the initial idea into the finished product, the BBC has stressed that this was to be – first and foremost – a dramatic production. Reflecting, perhaps, Mark Thompson’s own vision of making sure religion does not get lost in the ghetto of ‘religious programmes’, this was the product of BBC Drama – just as last year’s Liverpool Nativity emerged from the BBC’s Classical Music Department. No single Faith community had the right to claim it as its own. But alongside this insistence of editorial and dramatic freedom, there has been a visible and conscious decision to make The Passion as authentic and acceptable to the Christian community as possible, while still presenting BBC1’s core audience (made up of non-Christians, non-believers, secularists, agnostics, atheists and even anti-believers, as well as Christians) with a compelling – even compulsive – drama.

So, has the BBC succeeded?

The simple answer, after viewing episode one (scheduled for transmission on Palm Sunday) is: I’m still not sure.

And my reason for sitting on the fence on this issue is not because The Passion is bad or offensive or controversial: it is definitely none of those things. But my fear is: it simply assumes a greater knowledge of Christianity, of Christ and of the events of Holy Week than the ‘average audience’ (whatever that is) actually has. I well remember one of the BBC’s Religious Correspondents whose wife gave birth to a baby at Easter recounting how he had visited the Maternity Ward at his wife’s hospital and found the new mothers there poring over the New Testament looking for some reference to the Easter bunny! Similarly, I fear that the majority of Britons genuinely expect, when reading the story of Jesus’ birth, to find the role of the ox and the ass referred to. The Passion, critically, assumes a knowledge of the Gospels that may not actually exist among the BBC’s Holy Week viewers. I found myself, as a Christian, as a believer, as the Jesuits’ Communications Officer, and as someone who has worked as a Programme Consultant for the BBC on various productions, looking forward with eager anticipation to episode two. But I could not help wondering whether the ‘average’ member of BBC1’s audience would too.

All that is a very great shame, because it was obvious from what I viewed last night that the BBC has gone out of it way to produce a series of programmes that are – most definitely – NOT anti-Christian, or offensive, or sensational. The Passion clearly is an adult drama, the product of a large budget, of thoughtful, mature research, of an authentic, sympathetic process. And most of all, it has succeeded in one of its principal objectives: to set the events in the historical, political and religious context in which they occurred. This is something that truly stands out as one of the major achievements of The Passion. What went through the mind of Caiaphas as he received news of Jesus’ entry in Jerusalem on Palm Sunday? What really was the relationship between Rome and Israel, as Pilate’s cohorts arrived in the Temple precincts to ensure everything was orderly during the Passover Festival? And ultimately, why did the arrival of this itinerant Galilean carpenter cause such angst with the authorities? The sequence leading up to Jesus’ attack upon the money-changers and the traders in the Temple is pure theatricals, but so, so, so believable!

The other major achievement of writer, Frank Deasy, has been to weave the dialogue and events as recorded in the Gospels with his own (imaginary) conversations. The three occasions that stood out for me were: the conversation with the prostitute on his arrival in Jerusalem that clearly made such a deep and lasting impact upon her; the confrontation between Jesus and his mother, Mary – with no scriptural justification, but so real (what does emptying oneself totally to God’s will really involve?); and the final exchange in the final scene of episode one (I won’t spoil the ending for you) between Jesus and Judas. That moment when Jesus – identified here as on the Monday of Holy Week – realises that one of his inner circle is destined to betray him, is surely one of Deasy’s major coups.

Yes, there are moments when the plot or dialogue jars. The bartering with the owner of the colt prior to Jesus’ triumphant entry into Jerusalem seems to contradict the Gospel instruction of ‘If anyone asks you, just say the Master has need of it’. And why should the Jews worship at the Western Wall of the Temple, when that, surely, did not become a shrine until the Romans destroyed the sacred building in AD70? But putting those relatively minor niggles aside, The Passion represents a major break-through in the BBC’s attitude to core issues of the Christian faith. It is a strong, powerful drama. It has the feel of authenticity about it. It is not afraid to confront some of the core questions such as the role of Judas, the Jewish authorities or the Roman Prefect, without giving glib, simplistic answers.

But, as Jane Tranter pointed out before last night’s viewing, she was addressing an audience who didn’t need to hear the outline of the plot to understand what it was all about. My fear is that an average BBC1 audience will not have the same advantage.

However, for readers of Thinking Faith, please don’t let that deter you. The Passion is TV drama at its best. Don’t just watch it on your own. Encourage others to watch it – either in a group or as a family. The characterisation of Jesus is sufficient for a whole series of discussions: his humanity and humility, his warmth and his charism, his sense of humour, his sense of destiny (fulfilling the Father’s will), his relationship with his Father … Joe Mawle could make you feel you know Jesus intimately! And for those of you who were not at the Premiere, one of the highlights was hearing Joe remind us all that his name was ‘Joe’ not ‘Jesus’! And yet, somehow Jesus himself was strangely in the midst of that gathering. Not an actor or the product of some writer’s script, but – well – the Lord Himself.

Ged Clapson is Communications Officer for the British Jesuits.

The Passion, Part Three: 'The Faces Mirror Our Own'

The Passion According to Saint Luke