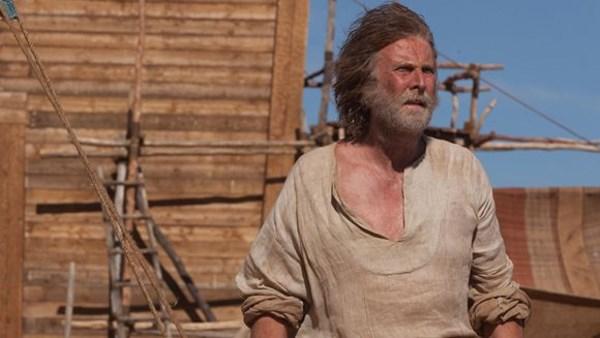 Tonight, Monday 30 March, BBC One will screen Tony Jordan’s new version of a biblical epic, The Ark. It is sensitively written and full of family drama, and what theology it does contain is at odds with the 2014 blockbuster, Noah; but its depiction of faith may not be quite what we would expect. How can this adaptation of the iconic story speak to Christians in Holy Week?

BBC One has chosen to dedicate its post-EastEnders slot on the Monday of Holy Week to a new 90-minute dramatisation of an iconic biblical chapter. Written by Tony Jordan, who counts EastEnders and the BBC’s impressive The Nativity among his credits, The Ark echoes the concerns of both of those projects in that it is a story primarily about people, relationships and family values.

It is a difficult tale to tackle, on primetime television or otherwise, and Jordan takes a different approach to most representations. The narrative has so often been infantilised and reduced to ‘the animals came in two by two’; ironically and deliberately, there are no animals to be seen here, apart from a couple of goats and some silhouettes of giraffes and elephants. Nor is there much water – what drama we see here comes from the family dynamic, not from CGI.

That dynamic is undoubtedly strong, thanks to sensitive writing, good casting and strong acting, particularly from Noah (David Threlfall – try to overlook his resemblance to Eric Idle in The Life of Brian!) and his wife (Joanne Whalley). And in fact, if this is to be classed as a tale about faith, it is Emmie’s unshakeable faith in and love for her husband that makes this telling of Noah’s story so compelling; her devotion to him, and the reactions of their sons and their wives, gives this story both its backbone and its momentum. This makes for good drama, but those hoping to find some insights about salvation theory carved into the walls of the ark might be disappointed.

This is a decidedly literal interpretation of the Genesis account: Jordan is pointing towards the figure of Noah and this episode in his life as a prophetic event common to Judaism, Christianity and Islam. But for Christians the story has a richer meaning when viewed through the lens of Christ.  The story of redemption through Noah’s ark is a precursor to the story of redemption in the ‘ark’ of belief in the life, death and resurrection of Jesus Christ, the new Noah.

No such ideas find expression here. Jordan, a man who has come to his own faith through his writing, has tried hard not to radicalise the story, unlike last year’s big-budget Hollywood interpretation: this Noah receives his instructions from God via a simple encounter with a lone figure (Ashley Walters) in the desert; there are no histrionics or stone-clad fallen angels to hammer home the message. Jordan’s attempt to ground such an incident in as much normality as possible will no doubt go down well with many people of faith whose religious experiences take place in the routine of everyday life, rather than accompanied by thunderbolts. But such an event could only really be rendered powerfully on screen if it happened within a fully-formed framework of Noah’s faith, which it does not. The family say a quick grace together before meals, and Noah pays lip service to a firm belief in God, but otherwise there is little evidence of how the faith of this supposedly devout man finds expression in his life, which makes his claims to revelation seem as unbelievable to the audience as to his wife.

That is not to say that this is a programme without meaning or value – and in fact the ludicrousness of Noah’s claims is what allows the absorbing family drama to develop.  What theology we do find here is theology from below, with ideals of service, commitment and social justice all alluded to; again this is in contrast to Russell Crowe’s Noah, in which the demands of a vengeful Creator loomed large over the plot. The God of The Ark is less intent on delivering punishment to the world than he is on offering people, through Noah, a chance to change their ways and save themselves from the consequences of living in a world in which the rich get richer and everyone else gets into debt, a world run by moneylenders and warmongers. Jordan does little to disguise the fact that the society in need of deliverance could just as easily be ours as Noah’s.

A careful and probing biblical exegesis in one and a half hours of television drama might have been too much to hope for, but another opportunity that was missed here was to make a connection with ecological issues in general and the debate around climate change in particular. ‘The simple truth is that man would rather live in a world of his own design, and this is what it looks like,’ says Noah – how challenging it might have been to a contemporary audience to frame the story in such a way that this ‘design’ involved neglect of creation as much as of people, pollution as much as corruption. In Genesis itself, after the flood, God's covenant includes humanity and all living creatures, ‘the covenant between me and the earth’ (Genesis 9:13). Few viewers will have their relationship with God changed by this sympathetic and personal take on a grand narrative, but a clearer exhortation to stewardship might have found a captive audience.

The Ark will make good Holy Week viewing for anybody willing to engage with the struggle of answering a call that demands sacrifice and commitment in the face of ridicule. We should be grateful that the BBC has seen fit to give such prominence to biblical drama, even if we have to bring our own theology to the screen.

Jesus: Who Do You Think You Are? 2. Rahab, Ruth and Boaz