Skip to main content
Photo by incendiarymind at flickr.com 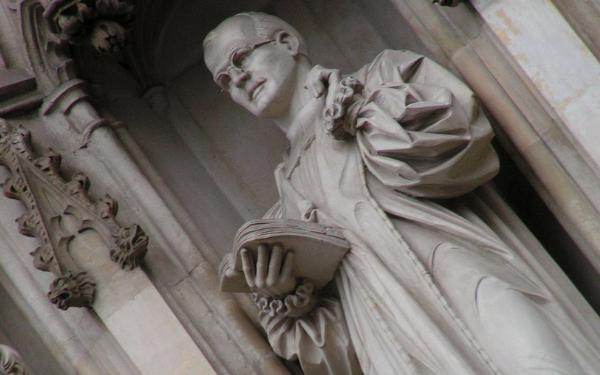 The forthcoming beatification of Cardinal John Henry Newman gives Fr Michael Campbell-Johnston SJ occasion to think about how we might draw comparisons between this much-admired intellectual and another inspiring figure in recent Church history – Archbishop Oscar Romero. How do these two great men continue to encourage today’s Church in similar ways despite having led very different lives?

Much has been written about the Pope’s visit to the UK during which he will declare Cardinal Newman ‘Blessed’, the first step on the way to sainthood. But there is another strong case for sainthood, also connected closely with the UK since a statue of him stands above the main entrance to Westminster Abbey. I refer to Oscar Romero, Archbishop of San Salvador. Though living in different ages and sharply distinct countries, the two men have much in common and both are highly relevant to many of the problems faced by the Church and today’s world. I would like to illustrate a few of these.

In his excellent book John Henry Newman: A mind alive, Roderick Strange identifies several areas in which Newman’s thought and words throw light on modern issues. Among them are: his way of thinking, his search for objective truth, his faith in infallible authority, his concern for the role of the laity and church unity, and finally his trusting surrender to God’s providence. Each of these issues also figured prominently in the life of Archbishop Romero and gave depth to the religious faith he shared with others.

Both men learned from events and reality rather than from abstract propositions or reasoning. Though Newman was a powerful intellectual force, throughout his life he gave priority to pastoral care and contact with people. What he considered a conversion experience, leading him to reject a liberalism which led to the relativism of his early years at Oxford, was occasioned largely by his ongoing search for ‘objective truth’ which dominated his later years. This he found in the Roman Catholic Church and its acceptance of revelation expressed in dogma. Objective truth is not a popular concept today and is often rejected by many on the grounds of defending a personal freedom that must never be restrained. Yet this, in addition to encouraging the fragmentation known as ‘post-modernism’, leads to precisely the sort of relativism that Newman rejected. He spoke of the ‘dictatorship of relativism’ that does not recognise anything as definitive and whose ultimate goal, as Strange puts it, consists solely of one’s own ego and desires. This is a message our modern world badly needs to hear and ponder.

During the three years he was Archbishop of San Salvador, Oscar Romero preached a total of 193 Sunday homilies in his cathedral, giving much time to their careful preparation and well aware of their importance since they were listened to by thousands throughout the country and abroad. He relied on feedback from his audience and the help of a team of experts in their composition. And he was well aware that his main task was to express and defend the traditional teaching of the Church, the truths that many rejected. As he put it: ‘I have tried to make the Church’s voice transparent. Perhaps I am unsuccessful because there is much ill will, much ignorance, and much idolatry, and idolaters don’t want their idol cast aside.’ (26 August 1979) And on another occasion: ‘As pastor I have the task – and this is what I try to do – of building the true church of our Lord, Jesus Christ.’ (25 March 1979)

In light of the above, it is no surprise that both Newman and Romero were strong defenders of the Church’s infallible authority. Though convinced of it, Newman had not been in favour of its definition at the First Vatican Council in 1870 for fear of extremism. And in subsequent writings, he made clear the limits imposed on infallible statements, especially that it was not a gift belonging to the Pope as a private person but exercised only when the Church was teaching ex cathedra,which requires consultation with and consent of the Bishops. For Romero it was the magisterium of the Church that commanded his total allegiance. This was the theme of many sermons and also of the pastoral letters he wrote to his diocese. In his fourth and last he said: ‘Our diocese wishes to be always docile to the Pope’s will, enlightened by the universal and continental magisterium of the Church which gives us much strength.’ (23 September 79). And he criticised those who wished to set him against the Pope: ‘I want to use this occasion to reply to those who want to put me at odds with the Holy See. The Archbishop of San Salvador is proud of being in communion with the Holy Father. He respects and loves the successor of Peter. I know that I would not serve you well, beloved people of God, if I were to tear you off from the unity of the church. Far be it from me! I would rather die a thousand times than be a schismatic bishop!’ (26 August 79)

The great contribution of the Second Vatican Council was to offer a new vision of the Church, which saw it not as a hierarchical structure, but rather a communion of equals. This rescued the laity from a role that has been described sarcastically as ‘pray, pay and obey’, and brought them into the centre of the Church’s apostolate. Though Newman died over 70 years before the publication of the Decree on the Lay Apostolate, he is considered to be one of its pioneers. An article he wrote as editor of The Rambler in 1859, with the title ‘On Consulting the Faithful in Matters of Doctrine’, led to criticism from several bishops, Cardinal Manning and the authorities in Rome. And his efforts to set up a Catholic university in Dublin, though they eventually failed, were intended to produce a laity ‘who know their religion, who enter into it, who know just where they stand, who know what they hold, and what they do not, who know their creed so well, that they can give an account of it, who know so much of history that they can defend it’. And these concerns were not isolated instances but a commitment that was profound and lifelong.

Romero was convinced he could get nowhere or achieve nothing without the laity. In a famous sermon he challenged them to become microphones. ‘I said once and I repeat today that if, unhappily, some day they silence our radio and don’t let us write our newspaper, each one of you who believe must become a microphone, a radio station, a loudspeaker, not to talk, but to call for faith.’ (29 October 1978) And he was under no illusions that he himself was essential: ‘If they kill all the priests and the bishop too, and you are left, a people without priests, each one of you must be God’s microphone, each one of you must be a messenger, a prophet. The Church will always exist as long as there is one baptised person. And that one baptised person who is left in the world is responsible before the world for holding aloft the banner of the Lord’s truth and of his divine justice.’ (8 July 1979)

Another concern shared by both was church unity. Though Newman abandoned the Anglican Church for the Roman Catholic and never hid his conviction that this was the true Church, he abhorred the division and spent the rest of his life working to overcome it. He defended Catholic members of the Association for the Promotion of the Unity of Christendom against prohibitions from Rome and emphasised the need to distinguish between doctrine and devotion. He strove to maintain good relations with his former Anglican friends and mentors and if, in the long run, he achieved little, his example illustrates the right path to follow. Nowadays notable advances have been made and important joint declarations drawn up, but differences remain and no one can prophesy when or if they will be overcome. But the methodology of personal respect and Christian love would seem the appropriate way forward and was one practised assiduously by Oscar Romero. On many occasions he went out of his way to invite ministers of other denominations to join him in worship and invariably made them very welcome. He himself participated in ecumenical services and encouraged others to do likewise. For, as he put it:

Everyone who struggles for justice, everyone who makes just claims in unjust surroundings is working for God’s reign, even though not a Christian…. A church that tries only to keep itself pure and uncontaminated would not be a church of God’s service to people. The authentic church is one that does not mind conversing with prostitutes and publicans and sinners, as Christ did – and with Marxists and those of various political movements – in order to bring them salvation’s true message. (3 December 1978)

A final and notable characteristic shared by both men was a total trust in God’s providence. Newman expressed this beautifully in his well known hymn Lead, Kindly Light: ‘I do not ask to see the distant scene: one step enough for me.’ He was able to say this since he was convinced that God is acting in the particular and personal way appropriate to each individual, which should be willingly accepted because ‘You do not love yourself better than He loves you.’ (Parochial and Plain Sermons, iii) Though he admitted being frightened of death and ‘violence against my person’, Romero showed a similar trust in God’s providence by accepting the likelihood of his assassination. ‘For me to be happy and confident’, he said, ‘it is sufficient to know with assurance that in him is my life and death, that in spite of my sins I have placed my trust in Him and shall not be disappointed.’ Hence his famous declaration to the Mexican journalist two weeks before his assassination: ‘I have often been threatened with death. I have to say, as a Christian, that I don’t believe in death without resurrection: if they kill me, I will rise again in the Salvadoran people.’

Two men, saints to those whose lived they touched: very similar in their holiness and the message they carry for us who live after them. We have much to learn from both of them.

Fr Michael Campbell-Johnston SJ is former Provincial of the British Jesuits. He is now a member of the Jesuit community at Farm Street, Central London.

What does faithfulness involve?

Oscar Romero: ‘Starting from the world of the poor’