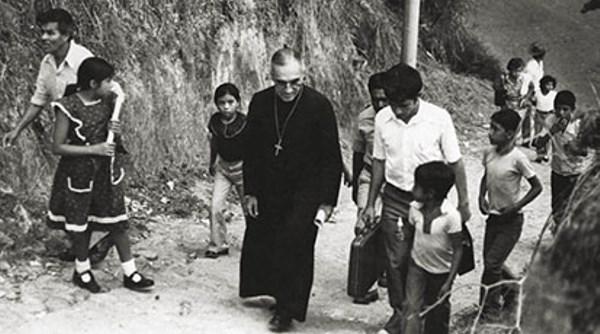 What does it take to change a conservative into a revolutionary? Archbishop Oscar Romero, born 100 years ago this year, was appointed largely because it was expected that he wouldn’t be one to rock the boat, to cause trouble for the rich benefactors of the Church in Central America. As a consequence, many of his fellow priests, who under the influence of liberation theology had already begun to show what it meant to live a ‘preferential option for the poor’, boycotted his inauguration. Yet within months Romero was being denounced to Rome as a communist subversive, and only three years later he would be assassinated by death squads financed by the very people who had lobbied to have him appointed archbishop.

The controversy that Romero’s witness stirred up continues in the present day, and it stands at the heart of a new Italian documentary film provisionally called, in its English sub-titled version, ‘The Claim’. The fact that the title might be better translated as ‘Making amends’ or ‘Vindication’ indicates the position taken by the film-makers Gianni Beretta and Patrik Soergel. They include a clip showing Pope Francis addressing a group of journalists on a plane. The martyrdom of Romero, the pope says, didn’t end with his death. Even today he is suspect in some corners of the Church, a fact which may help explain the seemingly slow progress towards bringing about his canonisation. The fact that the first Latin American pope is urging those responsible for the canonisation process to work more quickly is, in the eyes of Beretta and Soergel, clear evidence that Romero’s stance has now been vindicated.

For anyone who has seen the 1989 drama Romero, starring Raúl Juliá in the title role, the facts laid out in The Claim will be familiar. Romero was born into a family of modest means, studied for the priesthood in Rome and was ordained at the age of 24. Returning to El Salvador, he spent the next 25 years in pastoral ministry, then moved to the capital as secretary of the bishops’ conference and, a few years later, became auxiliary bishop of the diocese. In 1974 he was made bishop of a poor rural diocese, and this may have begun to open his eyes to the plight of the majority of the Salvadoran population. Yet when in 1977 he was made archbishop, he came with a clear reputation as a conservative, out of sympathy with the influential liberation theology that was popular with many of his diocesan colleagues.

Three weeks after his appointment, Romero’s close friend, the Jesuit Rutilio Grande, an outspoken advocate of the landless poor, was assassinated. This was a turning point. Romero later said: ‘When I looked at Rutilio lying there dead I thought, “If they have killed him for doing what he did, then I too have to walk the same path.”’ He refused for a time to attend any official government functions, made weekly radio broadcasts denouncing the ways in which those fighting for human rights were arrested, tortured, and ‘disappeared’,  and, shortly before he himself became a victim of the death squads, told soldiers that they had no duty to follow orders that set them against their fellow-countrymen. In the years following Romero’s death a full-scale civil war broke out in El Salvador. It wasn’t until 1992 that something like peace returned to the country, by which time an estimated 70,000 had been killed.

The film presents personal testimony from several who were close to Romero – his personal assistant, the vicar general of the diocese when he was archbishop, a Spanish journalist who documented his struggles with the Vatican, and others. The current postulator working in Rome to secure his canonisation, and Jon Sobrino, a Jesuit teaching in the University of Central America, who himself narrowly escaped death at the hands of the military when six members of his community were shot, also appear. There is footage of Romero addressing the huge crowds who filled the cathedral to hear him, and a sound recording of the Mass that he was celebrating when he died, interrupted by the crack of the single bullet that killed him.

Technically, Romero was martyred in odium fidei, in hatred of the faith. However, as The Claim notes, his death is an unusual example of a Catholic being martyred by Catholics. The question is thus which faith it was that led to his death. The conservative appointed to the diocese of San Salvador in 1977 would have been in little danger from the government and its military. Three years later, the archbishop who vociferously promoted ‘a faith that does justice’ had become such a threat that he had to be silenced. This film serves as a clear vindication of his beliefs against those who believed that he had sold out to Marxism, and in drawing parallels between his life and that of Pope Francis, shows why such a faith remains vital in the face of worldwide injustices today.

Where to see The Claim:

A Romero Centenary Mass will take place on Saturday 12 August at St George’s Cathedral, Southwark, which will be followed at approximately 14.15-14.30 by a showing in the adjacent Amigo Hall of The Claim – all are welcome to attend. Please visit the website of the Romero Trust for more details about the Mass or view this poster:  romero_centenary_mass.pdf

Christian Aid and SCIAF will host the Scottish premiere screening of The Claim on 16 August at 6.30pm, followed by a panel discussion, at CCA, Sauchiehall St, Glasgow G2 3JD. All are welcome, but please contact Teresa McGoldrick – [email protected] – to reserve a ticket. Please see this flyer for full details:  the_claim_glasgow_screening.pdf