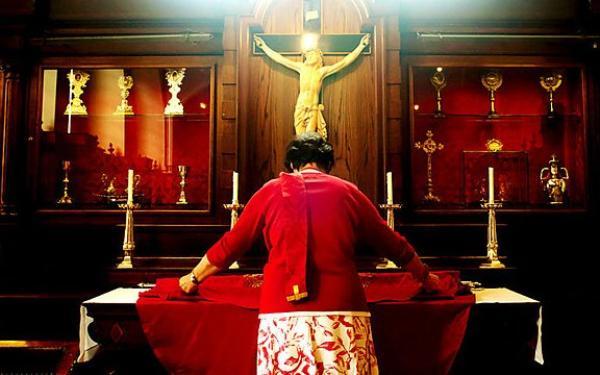 The final episode of BBC Four’s Catholics series focused on the women who staff and attend Westminster Cathedral. Christine Allen Dench found Richard Alwyn’s documentary to be respectful of the women to whom we were introduced, but wonders how fully he showcased the spectrum of roles that women occupy in the Church.

I have to admit that it was with some trepidation that I sat down to watch the third and final episode of the series, Catholics. Having glimpsed only snatches of the previous episodes, I wondered how Richard Alwyn’s programme was going to document the subject of ‘Women’.

The fact that the programme was screened on International Women’s Day was probably more a televisual accident than an act of design. For me, the day was a culmination of weeks of preparation of stories, blogs and photographs about the strong and inspiring women that my organisation works with around the world: farmers in Zimbabwe; activists in Yemen; women, young and old, building the fledgling nation of Somaliland. Across the world, International Women’s Day celebrates women and their gifts whilst at the same time acknowledging the inequality and powerlessness that characterises the structures of most women’s lives. This is not just an issue of the ‘rich global North’ versus the ‘poor global South’: on the day I had been to an event for businesswomen in the UK at which we discussed how contemporary pressures, attitudes and working practices all serve to mean women are less represented at management and boardroom level, and get paid less than men on average.

Although we may share some experiences and struggles in common, women are not a homogenous bunch. Nor, of course, are Catholics, and so I was interested to see how the programme makers would approach their task: the topic of ‘women in the Church’ would require an entire series of its own to do us justice! The producers focused the episode on the women working in and attending Westminster Cathedral, which to some extent gave the programme a coherent narrative; it also meant that the entry point to the subject matter was the functional role that women play currently in the Church. The programme did have respect for that functionality; I did not feel that it was being held up for ridicule. If anything, there was something of a ‘look at these helpless men’ humour when it came, for example, to the priests who turn up without vestments and get sorted out by Rose, the remarkable Cathedral sacristan who keeps everything in order; she talked about her role as ‘like running a train station’. However, there was an overall suggestion that there are even fewer niches in the Church that women can occupy than there are in reality. We did not see the women who run catechetical classes, who engage in debates, who do theology, and so forth. One woman was filmed reading a lesson and singing the antiphon, but the overarching feeling for me was of us as ‘back room girls’.

While the limited portrayal of roles was irritating, the voices and stories of the women themselves were very powerful. We heard accounts of rejection and pain caused by divorce, illness and bereavement. We also heard of suffering that had been caused by some parts of the Church and of the healing that had been brought about by the kindness and compassion of other parts. Such raw emotion, a connection with pain and suffering meant that we were presented with a very different picture than we might get from interviews with priests. There was no sense of ‘having to toe the line’, rather a very realistic and concrete reflection on the challenges and struggles we all face. On issues such as divorce, contraception and tackling HIV and AIDS, we heard a view that was different to the official line of the Church, but probably reflected what you would expect to hear in a pastoral or parish setting. I was struck by one woman talking about her experience of the Church in the 1940s and 50s, describing it as ‘rigid Catholicism’ and acknowledging that ‘we were indoctrinated’. It made me think just how radical was that tornado of the Second Vatican Council as it swept through the Church. How important it is to hear the voices of the people who lived through that radical change.

Amidst all the activity, interviews and conversations, there was one recurring theme: the strength of the faith of these women, a deep faith which both comes out of and is immersed in the contradictions, pain and challenges of modern life. It was a powerful gospel message. God is here; God is with us; Mary understands us; we make connections with those who have died; we juggle our lives to make space for God; we get close to God; we live with our failings in living up to Church teaching; we find comfort in the face of our difficulties. In the words and presence of those women did we glimpse a true and lived out faith. There were no strident voices; if anything there was a sadness and forgiveness of the frailties of an institution, and clear insistence as to where the focus was: on God. One woman reflected that you should never confuse faith with the institution, which is a line I use myself quite often!

Like most women who seek greater recognition for women in the structures of the Catholic Church, I do not want to be a priest, but I do think women make a huge contribution to the Church which often goes unnoticed. This programme did not present any arguments for a more equal role for women in the Church, but it did showcase something of this contribution and therefore made visible a lot of what the Church so often fails to celebrate.

The Cathedral observed the Feast of the Assumption during the filming so there was some focus on Mary. The paradox of Mary – being both meek and mild, and strong and determined – seemed to be a prism through which the whole programme could be seen: women undertake their part in the life of the Church with diligence and commitment, but they also have a questioning and fire which the Church does not quite seem to know what to do with.

Christine Allen Dench is Director of Progressio and is writing in a personal capacity.

Watch this programme on BBC iPlayer until Weds 21 March 2012.

When in doubt, wear red