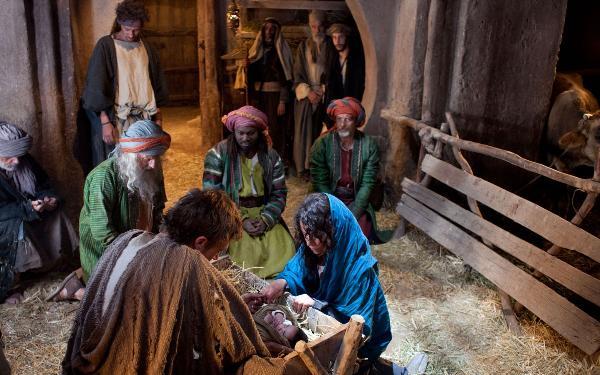 The final episode of BBC One’s The Nativity brings this delicate yet brave interpretation of the story of the birth of Christ to a beautiful and moving conclusion. Jim Conway SJ thinks that Tony Jordan’s creative script has presented the heavenly and earthly aspects of the Nativity story to the viewers of this series in a way of which St Ignatius would have approved.

St Ignatius Loyola in his Spiritual Exercises invites us to:

...see with the imagination the road from Nazareth to Bethlehem, considering the length and breadth of it, whether it is a flat road or goes through valleys or over hills; and similarly to look at the place of the Nativity, to see how big or small it is, how low or high, and what is in it. [112]

Ignatius would have been pleased with Tony Jordan’s efforts to engage his viewers in the Nativity of Christ. Like Ignatius, Jordan begins with the human, earthy stuff – the mess of the young couple’s situation, their grim journey to Bethlehem and the pain of giving birth – to bring to the fore the theological stumbling blocks posed by the Incarnation.

He does this skilfully by opening up the space between the couple’s starting point, Nazareth, and their destination, Bethlehem, using their physical journey, with its stark geographical contours, its ascents and descents, to explore the more arduous inner journey of faith.

The journey, then, which has unfolded delicately over the course of the three preceding episodes, takes the form of a pilgrimage. Although it’s made together, Mary and Joseph, as a betrothed but troubled couple, must ultimately enter into it alone, both of them exploring separately the specific task given to them by God. The Virgin’s journey of faith, whilst intertwined with Joseph’s, is different from his. What she has been asked to fulfil is unique and different from what Joseph has been invited to share.

The viewer accompanies the couple on their pilgrimage, bringing to the story the uncertainty of their own fragile and, often, fearful lives. They too are invited to grapple with the bounds of reason and the demands of faith. They’re assisted by characters like Thomas, the shepherd boy who, with his ailing wife and newborn child, provides a parallel to the ‘Holy Family.’ Thomas is desperately poor and defaulted on the payment of his tax in order to buy medicine for his wife’s deteriorating sickness. Despite his plea for compassion, he was visited by unsavoury ‘bailiffs’ who extorted a sizable portion of his small flock to recuperate the debt plus interest.

Thomas’s situation may well resonate with some viewers who, at this time of year, find themselves debt-ridden or living in the shadow of redundancy and unemployment. It raises ethical questions about the injustice of systems and structures that keep the poor in their poverty and/or debt, and about what sort of action people in desperate situations – like Thomas – might resort to.

Those who were expecting a Christmas card presentation of the Nativity might have difficulties with these aspects of Jordan’s production. They may argue that his ‘imaginative contemplation’ of Luke’s Gospel (the only gospel to mention the shepherds) goes too far and perhaps is manipulative of the text. For others, Jordan’s creative interpretation will make all the difference. It worked for me because the story of Thomas and his family is told in relation to that of Joseph and his family. Thus Thomas’s despair at his wife’s deteriorating health and his guilt about not being able to provide for her is tempered and illumined by Mary’s situation and by the promise of hope that the Virgin – theotokos – carries within: Jesus, the light of the world; the messiah for whom Thomas, the faithful Jew, has longed.

And the one for whom the Magi have also journeyed to Bethlehem, the city of David, on their astrological quest. Their arrival at their destination is greeted with planetary movements across the screen indicating that what is about to happen is way beyond what human beings can reasonably grasp; that the imminent Christ-event has implications for the whole of the world, the cosmos and the heavens.

Jordan captures this wonderfully well and takes his time to unpack the enormity of what is about to happen. And so, just as the viewer was invited to accompany Joseph and Mary on their journey, so now they are invited to share the anticipation of childbirth. They settle themselves with the distressed couple in a barn and watch in expectancy as Joseph searches the dark streets of Bethlehem for someone to assist at the birth, to no avail at first, but finally returning with a poor woman who takes control of the situation.

The pangs of childbirth endure for a long time. Mary cries out, even screams. No one can doubt that giving birth to God’s Son isn’t easy or that his entry into the world isn’t messy. Her body straddles the ground; her hand stretches to the heavens. We wait... and wait... until at last a hand, Joseph’s hand, stretches down as if from heaven, unites with hers, and the child is born. Heaven meets earth!

This is a really beautiful moment and a very moving interpretation of the Virgin birth and of Joseph’s acceptance, in faith, of his role in it. It has strong overtures of the ‘Hand of God’ painting by Michelangelo in the Sistine Chapel and connotations then of God infusing divinity into the very heart of humanity, redeeming it forevermore through the giving of his own Son. For some it may be controversial, raising doubts about Christ’s paternity; the hand of God reaching down from the heavens taking the form of Joseph’s.

Whatever one thinks, there is little doubt that something momentous has happened, a fact that is confirmed when Thomas and the shepherds enter the barn, followed soon after by the Magi. Thomas prostrates before the newborn, kisses his feet and knows this is the moment; his past is brought into the present and given hope for the future. His face is radiant. The Magi, their journey complete and their hearts satisfied, pay homage and offer their gifts. One can have no doubt they are given with love ‘...and Mary ponders all these things in her heart...’.

Screening The Nativity at peak time on BBC One will have drawn a wide spectrum of viewers. Jordan’s ability to draw his audience in means that there is something refreshing and engaging on offer for everyone. It will appeal to most Christians, for whom the birth of Christ is a foundational story of faith and an affirmation of it, and be enjoyed by people who know nothing or little about the story of Jesus. Wherever one falls on the spectrum, this series has been a wonderfully sensitive and beautiful gift for Christmas.

Making myself into a poor and unworthy little servant, I watch them, and contemplate them, and serve them in their needs as if I were present, with all possible submission and reverence.
[St Ignatius Loyola, Spiritual Exercises, 114]

Episode 4 of The Nativity was broadcast on Wednesday 23 December at 7pm on BBC One. All four episodes are now available on BBC iPlayer.