Skip to main content
All Quiet on the Western Front 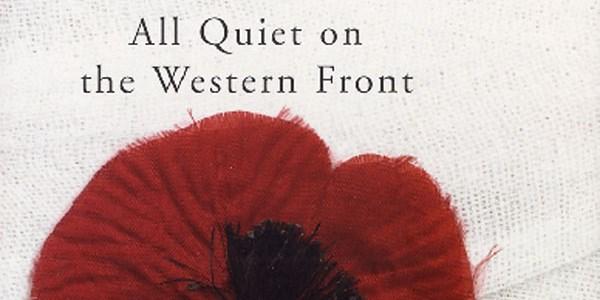 ‘Even in modern industrial war, Remarque sees the ineradicable dignity of man.’ David Baird continues our survey of World War I literature as he recommends Erich Maria Remarque’s ‘fictional, but not non-factual’ homage to a humanity that persists even in the midst of war.  You really must read All Quiet on the Western Front.

If there were an eternal essence of the art distilled from the experience of the Great War, purged of all blatant bitterness, absurdism and reactionary resentment and then condensed into prose, the result might be All Quiet on the Western Front.  It depicts the minds and bodies shattered by the fighting, but it reads more like a portrait of eternal man who happens, in this case, to endure even the near-hell of a trench war.  It is fictional, but not non-factual; its facts are not the historian's – names, battles and body counts – but the myth-maker's, the experiences of a representative and so universally recognisable man.  All Quiet on the Western Front is what you might have written had you fought in the war and lived to feel about it.

Erich Maria Remarque was born in Osnabrück, Northern Germany and was sixteen when the fighting began.  He was called up for military service in November 1916, was wounded by British shell fragments in the ‘Third Ypres' in July 1917 and was retraining to return to the front when the war ended.  He published All Quiet on the Western Front around a decade later, and although the book was burned by the Nazis in 1933 as an alleged betrayal of the German frontline soldier, its popularity grew such that it sold over 250,000 copies in a week.

The novel draws upon Remarque's direct experience of the Great War, yet it is neither memoir nor history.  It is fiction, and as Remarque writes in the book's epigraph, it is intended ‘neither as an accusation nor as a confession, but simply as an attempt to give an account of a generation that was destroyed by the war – even those of it who survived the shelling'.  Whereas many artists in the 1920s reacted to the war through dadaism, decadence and flapping high-energy despair, the distinctive quality of this book is its remarkable tenderness.  It portrays brutality yet is never brutal, and in its manner of telling as much as its tale, the novel amazes for its ineradicable humanity.

The plot follows nineteen-year-old soldier Paul Bäumer, who is someone we recognise immediately.  He is temporarily luxuriating a couple of miles behind the line, having just guzzled a double portion of beans and meat portioned out to his regiment through an administrative error (we learn that command had not anticipated the loss of half the regiment in the previous offensive).  The cook had been in a sweat fearing he would be blamed for the mistake, so readily started shoveling out the extras.  It is not long before we see Paul and his mates squatting in a circle of makeshift port-a-johns, carefree and joking, allowing the smoke of their unassigned cigarettes to rise up in the open air.  Most of the soldiers' vocabulary derives from such earthy bodily functions, we are told, yet here as elsewhere such elemental humanity is conveyed through a filter of immaculate good taste.

The same is true of the actual fighting.  In one striking scene, a bombardment from ‘the other side' – it is a sign of the novel's humanity that it seldom uses the word ‘enemy' – finds its way to a freshly-laid cemetery.  Splinters from pulverised coffins become as dangerous as the shrapnel, and limbs from the already deceased mingle with the newly maimed and dying.  Where a lesser writer would have ratcheted up the horror with another turn of the screw, Remarque relates only so much as conveys a sense: for instance, that in a total war between modern nation states even the grave is not sacred, and death is spread indiscriminately among the living.  Such sentiments at the lips of an ideologue might cloy; here, as images, they compel.  It is a paradox, but by representing war as beautifully as it can bear, the novel brings home its utter intolerability.  This must not happen again, it insists, not because of war's terrible ugliness; much worse, and entirely more convincing, is the sensitive display of beauty which smashes and crawls and howls yet survives.

This is the key note throughout.  Even when the narrative voice shifts to waxing poetic upon the injustices and absurdities of the conflict – in which, for example, a pig farmer from Bavaria kills a London shoemaker over issues which are incomprehensible to both – it is never in the frigid or condemnatory tone of a moraliser.  Rather, by struggling to consolidate as much beauty as is possible from the horror that defies it, Remarque is able to persuade through the logic of a few images what a few thousand syllogisms could not demonstrate.  War should not happen, his novel suggests, because there is humanity even in Hell.

Take, for instance, Franz Kimmerich, one of the boys from Paul's school who had his foot blown off in an assault.  Here he is, lying in a hospital gurney, with his prized British leather boots sitting uselessly underneath.  Franz does not yet realise what is perfectly obvious to everyone else in the room – he is done for – and his mate Müller is trying to get the boots off him before some orderly sneaks them away.  But Müller doesn't press the subject; he has the decency to sit there amidst the smell of disinfectant and say goodbye, as much to his hopes of comfort as to his friend.

Later, Paul is coming back from leave and gets stationed at a camp with Russian prisoners of war.  These pick timidly through the rubbish bins, get kicked by the guards as they slowly starve and resemble ‘meek and mistreated St Bernard dogs'.  One day Paul cannot take it anymore; he breaks his cigarettes in half and passes them through the fence.  For a moment a gleam flickers in some almost-terminally-downcast eyes, a stir among the embers of a never quite extinguishable humanity.

Remarque's novel was condemned as seditious; it has been has been pigeonholed as pacifistic; yet it is in its own terms robustly humanist.  It insists that there is a flame in man which burns so long as he lives, which no horror, no loss, no devastation wrought by a thousand million tons of human ingenuity can ever quite put out.  Man will continue to care; he will continue to feel; he will continue to love and admire and feel wonder, however little, so damaged, he is able to express it.  All Quiet on the Western Front testifies by its mere existence that man's cunning for inhumanity, even on a global scale, is never so powerful that it will finally overcome the generosity of his unkillable heart.

It is not a coincidence, I think, that Remarque was raised a Catholic.  Whether or not he practiced the faith into adulthood, clearly some of its original vision remained.  Even in modern industrial war he sees the ineradicable dignity of man:  pound man into the mud or throw him into a war where every permutation of premature death, despair and degradation will obscure his interior man in layers ever thicker and harder to rinse away, but a discernible image will endure.  It may not require a poet to discern the everlasting man in the profile of every damaged one, and it may not ultimately require words to represent him, yet he will be a kind of eternal poet who can gaze upon the blood-smeared face of his bayoneted foe and see a mirror of his self.  This is the miracle of All Quiet on the Western Front, and perhaps the truest victory to come out of all the loss.