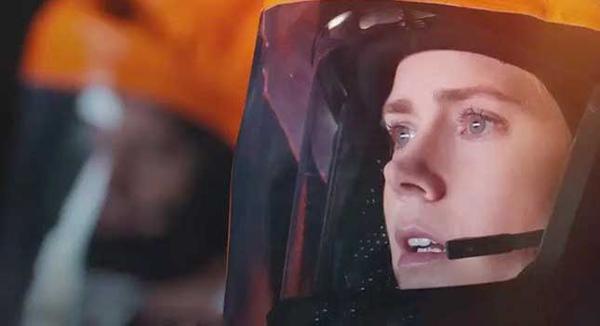 Arrival seeks to broaden the sci-fi sub-genre of ‘first-contact’ films by blending an emotionally compelling drama with intellectually stimulating questions. Comparisons with Christopher Nolan’s Interstellar are inevitable, but Arrival is more grounded, both figuratively and literally – we never leave Earth in the film. The plot, based on the short story, Story of Your Life by Ted Chiang, is an ingenious mix of the familiar and the unfamiliar, and will manage to amaze even the most seasoned sci-fi viewer.

In the film’s seemingly incongruous and emotive prologue, we view Louise Banks’ (Amy Adams) memories of her daughter’s birth, life and death as a teenager. The grand news of the alien ‘arrival’ is artistically conveyed by not focusing on the actual moment, but on Louise hearing about it while teaching a class. She is an expert in linguistics at an American university and it’s not long before the army is at her door in the form of Colonel Weber (Forest Whitaker) asking for her help to interpret the whale-like moans of the aliens. It’s a refreshing take on the challenge of alien communication as it avoids the usual tropes of having the aliens conveniently speaking English or possessing some type of universal translation gadget.

It is revealed that 12 crafts have semi-landed (as they hover a few feet above the ground) in random locations across the globe. Banks’ instructions are to communicate the question: ‘What is your purpose on this planet?’ to the ‘Heptapods’ and interpret their reply. To this end, she is paired with physicist Ian Donnelly (Jeremy Renner), although he is initially more interested in understanding the science of the aliens’ space voyage than in the slow task of communication and interpretation.

Banks’ task is no trivial linguistic feat. The challenge isn’t made any easier by the discovery that the Heptapods’ spoken language is vastly different from their written one. As Banks delves deeper into their language her mental world becomes a haze as memories of her daughter keep flowing to the fore. Meanwhile, the other countries with crafts are understandably getting nervous about the alien visitors, and diplomatic tensions are strained when some adopt a ‘get them before they get us’ policy. Against this backdrop, Banks must race against the clock to deliver her message. The need for effective communication even in difficult circumstances is one of the film’s key themes and shapes much of its tension.

Arrival is an exploration of the concepts of time, memory and language. The plot turns around Banks’ encounters with the aliens and her struggle to communicate with them, and Adams gives a fantastic performance throughout. The build-up to the actual moment of first contact is a satisfying one and an ethereal score provides the perfect atmosphere. Like any great sci-fi film, there will be lingering questions but those fail to ruin the cinematic experience. Arrival certainly has the potential to be the best sci-fi movie of 2016 and, like any great experience, is sure to leave one with feelings of gratitude and awe.