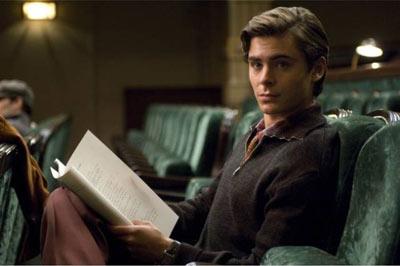 
Richard Linklater is one of the few directors able to maintain parallel careers as an alternative and mainstream artist. While films like Waking Life have seen him explore the experimental and non-linear narrative, Me and Orson Welles is a clear attempt to capture a larger audience, using High School Musical’s Zac Efron as a foil to a study of Welles, combining a routine coming-of-age story with a meditation on creativity.

At the centre of the film is Christian McKay’s Orson: funny, dynamic and utterly amoral, willing to do anything to get his production attention. This portrayal of the artist is the whirlwind in which Efron’s student finds himself caught, and his own youthful moral dilemmas are bullied and twisted by the great genius. Aside from McKay’s show-stopping performance, it is the film’s ability to picture a villain with such charm that lifts it beyond a mere romantic vehicle for Efron.

Linklater happily toys with expectations of Efron: he is trying to escape school, just as, in real life, Efron is overshadowed by his part in High School Musical. The constant references to the mechanics of creating art give the film a knowing, self-conscious intelligence. When Efron’s Richard bursts into a parody of ‘Singin’ In the Rain’, he draws attention to cinema’s heritage, making explicit the way that the medium defines the narrative, and the final montage of Welles’ Caesar stresses the difference between live theatre and cinema.

This intellectual cleverness provides a thoughtful backdrop for Efron’s character’s own maturing moral sense. In a world cut adrift from usual concerns, he is forced to make difficult decisions, to do the right thing, even at personal cost. Setting this against the studied cool of Welles and his players, it makes Efron the moral centre, a young man trying not to be corrupted even as he studies his hero’s misbehaviour.

His Richard is torn between two loves: a gentle friendship with an aspiring writer and a passionate affair with an older woman. Although this is resolved only at the very end of the film, with the image of a bird escaping from a museum, it provides the compassion of the film. Finally, Richard can pursue his own vision, and not be drawn into Welles’ maelstrom.

As a coming of age drama, the sharp script sets this above most Hollywood genre movies: through McKay, it is a moving vision of the artist’s failure to maintain compassion against the strength of their personal aspirations. It keys into Linklater’s thematic fascination with the individual, and the desire to live an authentic, sincere life, and Richard would easily slip into one of Linklater’s alternative features as the innocent hero. Charming and witty, Me and Orson Welles presents a stark moral choice in sugar-coated humour, advocating an independence of mind and a sincere moral certainty, hard worn from the temptations of glamour.