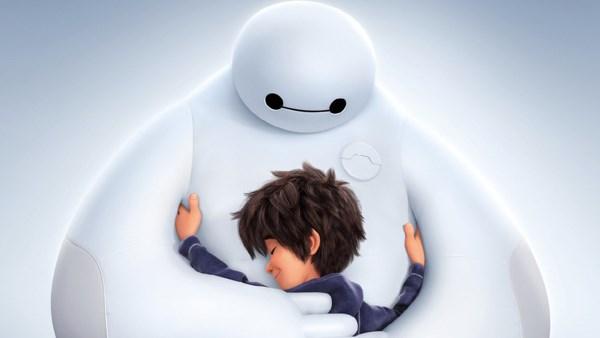 Blessed are the merciful, for they will receive mercy.

Not only did Big Hero 6 win the 2015 Oscar for Best Animated Feature, but it also won the admiration of Eric Hanna SJ, who sees the film as an illustration of how mercy is both shown and received. As such, it’s a perfect addition to our Beatitudes on Film series. How can Hiro’s story encourage children to be merciful and to recognise when mercy is shown to them, by God and by others?

The Lord is gracious and merciful,

slow to anger and abounding in steadfast love.

The Lord is good to all,

and his compassion is over all that he has made.

All your works shall give thanks to you, O Lord,

God shows us mercy not only to help and heal us but to teach us how to relate to one another.

Conflict is part of our experience of the world. Because, as human beings, we can think and act for ourselves, we can set our plans and agenda in opposition to others. We can make enemies. Human pride and fear can make us compete in order to stake out sovereignty over our little sections of the world. And yet, even this apparently fallen state reveals God's great mercy.

When an ancient king conquered his enemies, that king was victorious and had the power to make those enemies' lives miserable. He could enslave or even kill them. Yet kings were praised for practising the virtue of mercy, a sign of a good and wise ruler. Mercy is an acknowledgement that the relationship between two people can be more than the conflict.

What do you do when you are in conflict? Our fear, pride and insecurity often deceive us with the desire to exact harsh punishment, to strike a blow so that the ones we have power over in the moment cannot hurt us. This is not God's way. God has everlasting power – but also everlasting mercy. He doesn't want to punish us or take away our freedom. He wants to teach us to use that freedom well. Whether Christ is weak and helpless on the cross or robed in majesty on the throne of heaven, Christ shows great mercy: he loves those who wrong him and calls them into love.

Mercy can create a marvellous intimacy between ourselves and God at times when we are afraid. In a moment of truth, we may realise how often God has loved and blessed us, only to find that we have repaid that love with sin. We have a terror of showing ourselves to God because we imagine that once our secret misdeeds have been seen we will no longer be worthy of love. We think we must destroy the inadequate parts of ourselves before we can face God's justice. But mercy is God's justice. He doesn't love us merely ‘in spite’ of our flaws; He wants to find those wounded and hurting parts of us and heal them. He wants to help us grow, as a loving parent gently helps a child. The sinful and rejected parts of ourselves are crying out for God's mercy, for His tender touch. A sin or a mistake can be a blessing when it helps us to remember our need and desire for God's mercy.

So, whether we are weak or powerful in a given situation, we are called to be Christ-like in showing mercy. Our sins have been forgiven and we have been loved. So even when you are wronged, you are called to ‘be merciful as your heavenly father is merciful’ (Luke 6: 36). The next time someone starts a conflict with you, try being vulnerable. Try talking about how you feel hurt, how you want to relate to the person, how you want to understand where they're coming from. Your first instinct will be to put up barriers, but be the bigger person. Love even when you are hated. You will find that people are moved by your compassion. Your hope and trust is something they will be compelled to honour. This is not easy: ask God for help. If you let God's mercy shine through you, others will have a window into what life with God is like.

Mercy is a wonderful theme in the film Big Hero 6. The main character, a young robotics expert called Hiro, begins the film enjoying the power that his creativity and intelligence give him. He uses this power to get the better of others. But Hiro's older brother, Tadashi, directs this same energy and power towards helping the world. His benevolent attitude is embodied in Baymax, the robot that Tadashi created whose only desire is to care for people and to help them grow. Baymax is the archetype of mercy.

However, it's relatively easy to show mercy when you are in a place of comfort and security. The challenge is to be merciful when you are hurt and grieving. The death of Tadashi is a devastating blow to Hiro: he is lost. When we are hurt and lost, we can try to regain our power by punishing an enemy. Hiro lashes out by trying to find the masked villain whose actions lead to Tadashi's death.

The mask is important. When we have decided to lash out, we lose sight of the fact that the ‘enemy’ is a real person. We can't see who they are or what they have been through; we make the other person into a faceless object. Recall a time when someone deeply hurt you. Did you end up arguing with that person in your own head? Imagining all the ways they are wrong? All the ways you desire to invalidate their perspective and trumpet your own? You end up interacting more with the enemy you've invented in your mind than with the real person out in the world. This ends up hurting you as much as it hurts your enemies. And the ever-merciful Baymax rightly fears that this desire for revenge will seriously harm Hiro.

Yet the objectification of our enemies can be reversed. In the course of Hiro's journey, his enemy is unmasked. We learn that the villain is a human being who is also deeply grieved, in this case by the loss of his beloved daughter. The villain of the film is a shadowy version of what Hiro might become – numb to the memory of his beloved and living only for revenge. But Hiro chooses not to go down this path after he realises that he has objectified not only the villain but Baymax, too, turning the latter into merely an instrument of revenge. Hiro doesn't want to cut himself off from relationships with his friends. And it is in these loving relationships that Hiro both gives and receives mercy.

Hiro receives mercy as his friends forgive him, call him to give up his quest for revenge and to live life. He gives mercy as he fights: no longer does he wish to destroy his masked enemy, he wants to save and help the person behind the mask. We don't have to condone the wrongs others do in order to love our enemies: we can love them by stopping their unjust actions and calling them to change. By showing mercy, by desiring the good even for his enemy, Hiro is able to think of the problem from another angle and eventually to rescue his foe's lost daughter. And finally, in a deeply Christological act of self-sacrifice, Baymax shows mercy to the extent of giving up his life for Hiro.

If you watch and discuss Big Hero 6 with children, asking them the questions below might help them to think about and understand the ways in which this film illustrates how mercy is shown and received:

- How do you relate to God? Do you understand that God truly loves you, even when you make a mistake? Do you act in a way that shows you believe in and desire God's tender mercy?- How do you react when you are hurt by others? When's the last time someone really wronged you? How did you react? Did you want to fight back? Did you turn the other person into an object? How can you relate to them like a person again? How can you see their face and discover where they are coming from?- Who are the friends and family in your life that are like Tadashi, Baymax and the gang? How do they make you feel about yourself? Are there times when you pull away from them? Are there times when you feel close?- What does it mean to be a hero? How does a real hero deal with someone who is acting wrongly? In what ways does a hero show mercy?- What would you do if you had super-powers? Would you be tempted to fight for yourself? A good hero works for others' good... but how do you do that when things get hard?

St Henry Morse SJ: ‘A saviour of life unto life’
Alfred Delp: committed to Christ
‘The Fight Between Carnival and Lent’
Ignatius and the Stars
‘Give them something to eat’: The Christian approach to food aid