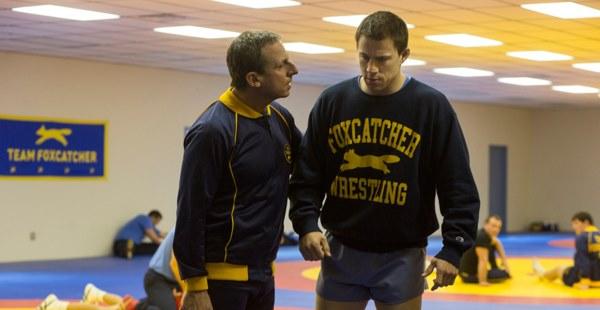 Foxcatcher is the true story of the Schultz brothers, successful US Olympic wrestlers in the late 1980s who became ensnared in the vain dreams and personal hell of an eccentric billionaire philanthropist.

It is a well-crafted and original psychological drama that could easily have been made as a conventional true-crime thriller if the filmmakers had so wanted.  Instead, director Bennett Miller (Capote), and writers E. Max Frye (Something Wild) and Dan Futterman (Capote) have made a conscious and well-judged choice to maintain a certain aesthetic distance from genre expectations and from the heart of events.

The billionaire is John Eleuthère du Pont (Steve Carell), who was the heir to the DuPont chemical fortune, amassed over a number of generations from the sale of gunpowder to the US military.  (His biography is found easily online, but I urge you not to research him further if you plan to see this film). Despite the disapproval of his society mother (Vanessa Redgrave), he financed and built a state-of-the-art Olympic training centre on Foxcatcher Farm, the family’s 800-acre Pennsylvania estate, and invited the US wrestling team to train there prior to the 1988 Olympic Games.  With medal winners in shiny ‘Team Foxcatcher’ tracksuits, geeky plutocrat John would be able to take credit for, and bask in, their success.

Du Pont has his eye on the two brothers, Mark (Channing Tatum) and Dave (Mark Ruffalo), to train and lead his team. We meet the brothers at one of their daily training sessions in a dilapidated Wisconsin gym.  Mark, tightly wound and muscle-bound, is a man of few words and minimal social skills.  He both desperately needs and resents the guidance of his older brother.  Dave, bearded and swinging his arms around like a big bear on hind legs, is far more articulate, tactile and relaxed than his brother, but as far as Hollywood conventions are concerned, he is still a closed book.

They begin their warm-up like two playful puppies, but then Mark gives Dave a bloody nose with a head butt that might or might not have been accidental.  Mark, taut and defensive, doesn’t apologise, but friendly Dave shrugs the injury off as though nothing has happened.

We later see Mark sitting alone at home, scoffing junk food in a room without any books or signs of entertainment. When he gets a phone call from du Pont, inviting him out to Foxcatcher Farm by first-class ticket and personal helicopter, he is flattered and intrigued, and he accepts.

The unathletic du Pont, who is nearly always seen in an immaculate tracksuit, turns out to be a strange animal indeed. On a tour of the facilities, he gives Mark an unconvincing lecture on patriotism and reveals an obsession with ornithology.   When they talk money, we see neatly how the rich exploit the poor: Mark asks for a salary that might have made sense back at the Wisconsin gym, but is small change to the billionaire, yet du Pont pretends to think seriously about this before agreeing.  Moments later, when du Pont asks whether Dave would be interested in joining the team as well, Mark tells him to forget it: ‘You can’t buy Dave.’ There follows a long pause as he attempts to process this. John E. du Pont clearly doesn’t do rejection.

Mark moves in and becomes team trainer, but it soon becomes clear to his new boss that the younger Schultz isn’t much of a teacher.  Du Pont starts to treat Mark with contempt, and plies him with booze and cocaine.  One night Mark is woken at his cottage by a drunken John in a dinner jacket: the boss wants a late workout.

On the floor of the gym John gets on top of Mark and holds him in a feeble lock.  Mark could topple John with no effort, but he plays dumb and allows his employer to humiliate him.  Mark’s eyes (which are the key to Tatum’s superb performance) show a mixture of pity for John and resentment that he has allowed himself to be bought.

John now offers Dave a salary he can’t refuse and it is accepted; Dave wants to give his wife (Sienna Miller) and young children the stable upbringing he missed.  The older brother shows his skills as a trainer immediately and a sulking Mark retreats to the edge of the group.  The film becomes totally compelling as we watch the three men negotiate their unspoken relationships and the shifting pecking order.  The resulting tension builds right up to the tragic climax.

Foxcatcher is a dark, unsettling film that has much to commend it, particularly its central performances (Steve Carrell and Mark Ruffalo are Oscar-nominated for their work).  All three men are emotionally repressed, the brothers as a result of the early death of their parents and a deprived upbringing thereafter, and the unreadable du Pont from … the Lord knows what, we never really find out. It is fascinating to watch the different ways in which the actors express this.

The script is unusual in that there is virtually no expository dialogue in which characters reveal their backstories.  With the dialogue largely limited to wrestling business, we resort to scanning faces and reading body language for clues.  Carrell’s physical performance in particular is fascinating: his portrayal of du Pont is so stiff-necked that he never moves his head without swivelling the rest of his body as well.

I was intrigued by the extent to which the film hints at crucial ideas but leaves them unexplored.  Does Mark’s job include providing sexual services to his employer?  Does du Pont’s fascination with wrestlers derive from a repressed sexuality? And what happened in his life to make him the way he is?  It can’t just be access to the riches of Croesus.

The filmmakers were right to take a step back from the latter question.  Remember that awful scene at the end of Psycho when a smug psychiatrist ‘explains’ Norman Bates?  By defying the conventions of genre scriptwriting, Foxcatcher preserves a respectful distance from its characters, as well as forcing director and cast into nonverbal means of expression – the terrain of pure cinema.