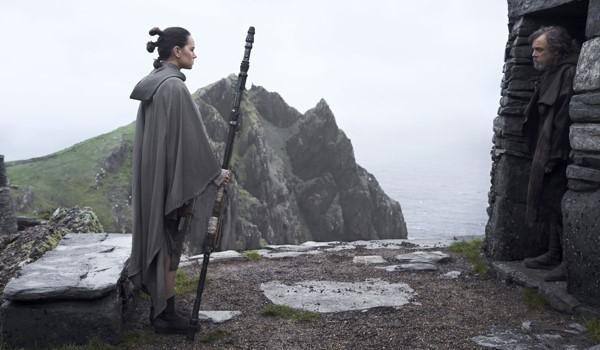 The Jedi order is on the verge of extinction and the galaxy is in danger of becoming overrun by forces of the dark side. The one surviving Jedi, Luke Skywalker (Mark Hamill), has retreated to a live like a Celtic monk on a ferociously beautiful and wild island, disillusioned and in despair. He is preparing for his own death and has resigned himself to see the order die, too … or has he? Having seen the Jedi temple and the order’s headquarters on the planet Coruscant destroyed by his former pupil, Kylo Ren (Adam Driver), Luke has created on his island a primitive temple and a library with the last remaining books containing Jedi wisdom. His hair is long, his beard is straggly, almost like a wild Ignatius living in a cave in Manresa. His guilt about having trained Kylo Ren is palpable, but when fresh-faced Rey (Daisy Ridley) seeks him out, presents him with his lightsaber and asks him to train her, she taps into the spirit that is still smouldering in his heart beneath the layers of bitterness, hurt and resignation. His makeshift temple has a meditation rock outside, and even a mosaic of the Prime Jedi, the founder of the order, so he has not totally fallen into despair, and Rey is the one to coax him back into the mission. There is something quite interesting about the renewal of orders going on here.

The Jedi have played a key role in keeping the balance of the Force in the galaxy, promoting justice and peace and keeping the dark side at bay. Seasoned wisdom and long training have produced a steady stream of Jedi knights, some of whom progress to become masters and take on their own apprentices (padawans). However, they have also been plagued by division, which has led to splits and schism. Some of the Jedi masters have been corrupted and turned to the dark side, founding their own orders such as the Sith or the dominant First Order in the new trilogy. But the resistance know that without the Jedi they have no hope, and underpinning this film is the relationship between the consolation of hope and the desolation of despair, as exemplified in the dynamic between Rey and Luke.

The great mythology of Star Wars has won the hearts and minds of a new generation, following in the footsteps of The Lord of the Rings and Harry Potter, thanks to the clever planning and marketing of its new parent company. In October 2012, Star Wars creator George Lucas sold his production company, Lucasfilm, and with it the Star Wars franchise, to The Walt Disney Company. This is the best thing that could have happened to the mythology – resisting the stagnation of Lucas’s ‘founder’s syndrome’, this eighth episode of the franchise delivers an absorbing blend of sensational action sequences, powerful performances and clever twists, sprinkled with humour. You do not have to be a Star Wars fanatic to enjoy this. The backstory is explained with a light touch; however, some of the old tropes and themes are reassuringly reprised while new characters are sensitively introduced. The Last Jedi is the middle episode of the sequel trilogy, and writer/director Rian Johnson has done his bit to dispel the bad taste left by the prequel trilogy and open up a hopeful future for the franchise. J.J. Abrams had begun this process in The Force Awakens (Episode VII), but Johnson now opens up new vistas. Poignantly symbolised by Carrie Fisher’s death after filming, this film is transitioning – the narrative insignificance of Rey’s parents shows that we are moving away from the oedipal and dynastic threads of Darth Vader and Skywalker, Han Solo and Kylo Ren. This puts the franchise in good shape for the future, which is refreshing news for cinema-goers and for Disney, who must be enjoying the sound of cash registers ringing.

However, lest we become too cynical – the central message of love overcoming hate, and the clear denunciation of untrammelled power and the blind hatred that fuels it, are welcome and will be leapt upon by a bruised generation. We Jesuits can also learn a lot: Luke and Yoda both play an important demythologising the Jedi order – renewal will come from the edges, not the centre. The way in which female leadership gently pushes aside heroic leadership, and the overall themes of hope in an uncertain future, will capture the hearts and minds of so many young Jedis-to-be.