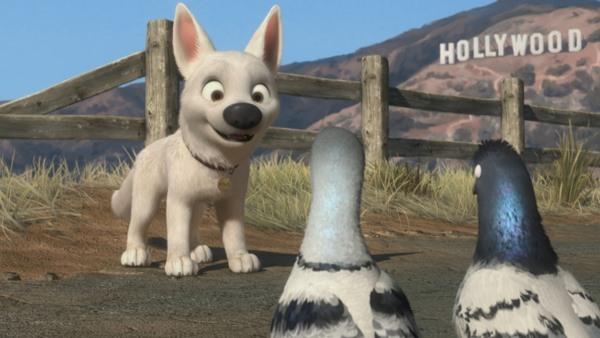 Blessed are the meek, for they shall inherit the earth

Meekness doesn’t necessarily sound like something to which many people would aspire, says Edel McClean, but perhaps that’s because we’re thinking about it in the wrong way. It’s not about weakness, but about ‘a discerned and appropriate use of power’, and who better to demonstrate this than…a cartoon dog who thinks he’s a superhero?! We add Disney’s Bolt to our Beatitudes on Film series for children.

Inheriting the earth might seem attractive; meekness, however, at least in its general usage, is anything but. To my ear, ‘meek’ seems like something of an insult, suggesting someone unwilling to stand up for themselves, someone weak or insipid. What would the earth look like if the meek, of all people, inherited it? The word as it is used in scripture, however, holds two meanings – gentleness and strength. It is something to do with a discerned and appropriate use of power. I can’t think of a word in the English language that combines these concepts helpfully… but we do find some help in a computer-generated dog called Bolt.

Bolt is a 2008 Disney production that follows an eventful few weeks in the life of the eponymous dog hero. In a beginning which has echoes of The Truman Show and Toy Story, Bolt (voiced by John Travolta) has, for the purposes of Hollywood, been reared from puppyhood believing that he has superpowers. He is the hero of his own TV show, which revolves around his partnership with a young girl, Penny (voiced by Miley Cyrus). In order to ensure Bolt’s ‘method acting’, he never leaves the studio, nor does he know that there is life outside of it: he believes that every stunt and special effect is real and that, in world filled with evil, he has the ability to protect his partner using his various superpowers.

When the programme format is changed, Bolt and Penny are kept apart at the end of an episode, and the distressed Bolt escapes, finds his way into a packing box and is shipped across the country. The narrative of the film then follows two journeys. The first is Bolt’s odyssey back across the U.S. in the company of an alley cat called Mittens and a hamster called Rhino. The second journey is Bolt’s coming home to himself – his painful (both physically and emotionally) recognition of his limitations and gradual acceptance of his identity as a ‘regular dog’.

It is this second journey that is of most interest to us here: those familiar with the Spiritual Exercises will be able to detect the movement of the four weeks in the film. As in the First Week of the Exercises, Bolt comes face-to-face with the reality of who he is, and the realisation is a difficult one. His life to date has been a cosseted and elaborate set-up, and there are many, including Penny’s emotionally illiterate agent, who are totally invested in keeping him in that false world. He has never been hurt, never experienced hunger, and never experienced the world outside a Hollywood studio. The viewer is rightly moved as Bolt fails to recognise all the evidence of his limitations – as he says himself he’s ‘all discombobulated’. All the powers that he trusted in to protect him no longer work, which means he gets hurt physically. But the real pain is in the realisation that he is not what he thought he was: ‘if I don’t chase bad guys then who am I?’

Perhaps we recognise that we too are often fed a packaged or staged view of the world. There are forces keen to prevent us from seeing ourselves for who we really are and the world for what it really is. Pope Francis makes precisely this point in Laudato si’, recognising that many people are sold the lie that consumption is the only route to the good life. We are so immersed in that lie, our lives are so elaborately staged to deliver this message, that when something happens to knock us out of our delusion it can be utterly disorientating. We are left asking the question, ‘who am I now?’

Bolt is not invincible. He is an ordinary dog needing to find a way of living well in the world. Like all of us, he is offered choices by his companions. Mittens the cat, when we meet her at the beginning of the film, could not be more under the influence of the bad spirit. She has been caused pain and so she causes pain to others. She lashes out. She is cynical and self obsessed. As she and Bolt become friends they find rich pickings, first begging at an RV park, later stealing from dumpsters in Las Vegas. She urges Bolt to give up on returning to Penny and to accept instead a life of literally living on the scraps from the rich person’s table. When Bolt insists he has to return to ‘his person’, she tells him: ‘they act like they love you, they act like they’ll be there forever, then one day they pack up all their stuff and they move away and they take their love with them’. It’s not just a moment that’s liable to send you off to the nearest pet rehoming charity, it’s also the cry of everyone who’s been hurt by the world and takes the road of self-protection. Better to be safe than to risk such heartbreak again.

On the other side we have the path of Rhino, the heroism-hankering hamster. Rhino refuses to see reality, refuses to believe that Bolt can be ordinary, telling him ‘every moment spent in your company becomes the new greatest moment of my life’. Rhino provides much of the humour in the film, but he also tempts Bolt to hide from the reality of who he really is. Where Mittens calls Bolt to be less than he truly is, Rhino calls him to pretend to be more than he truly is. Rhino has made the choice to deny the complexity and messiness and regular boredom of the real world in favour of a world of fantasy and self-importance. He tells Bolt to be a particular kind of hero, a Hollywood hero, and Bolt has to recognise that he can’t live up to that dream. ‘This does need a hero’ he tells Rhino, ‘and I guess I’ll have to do’.

There is something here of what we experience on the journey through the Exercises: of being loved as we are, while also being called to play our part in building the Kingdom. It is a dynamic of true freedom, recognising that we, and the world, are imperfect, but that even in the midst of this, we are loved. That love lifts us and gives us the will and energy to labour for something better, even if we know that the part we play may be very small. It is captured in the famous words of Oscar Romero:

We cannot do everything, and there is a sense of liberation in realizing this. This enables us to do something, and to do it very well. It may be incomplete, but it is a beginning, a step along the way, an opportunity for the Lord's grace to enter and do the rest.

In other words, there is something here about a discerned and appropriate use of power. There is a place of meekness which lies between diminishing yourself and inflating yourself.

The question here is of how Bolt is to understand his vocation. The Bolt at the beginning of film lives in a state of high anxiety – I will not be the only dog-lover saddened by the humans’ willingness to manipulate Bolt’s emotions for entertainment. He cannot trust anyone but Penny, nor can he accept any flaw in himself. Hollywood has manipulated his worldview so that the burden of responsibility for both Penny and the world as he knows it rests firmly on his canine shoulders. A little like Ignatius when he first begins his ministry, Bolt’s life is one of extremes, demanding the dramatic and the extraordinary. Although the realisation that his superpowers never existed is immensely painful, it also gives Bolt a new freedom to relax and be his true self – and know that that is enough. In one of the most moving sequences of the film, Mittens teaches Bolt what it means to be a ‘regular’ dog, including gems like ‘what’s on the ground goes to the hound’, sticking his head out the window of a moving vehicle, chasing sticks and curling up in front of a fire. He discovers that accepting his ordinariness is not just a matter of sacrifice but also of pleasure. The Bolt who returns to Penny at the end of the film is no longer trapped by false expectations or crippling anxiety. He has embraced the freedom of being himself and so is a much truer and more loyal companion to her than the old Bolt could ever have been.

At the end of the film, Bolt returns to Hollywood and to Penny. In a dramatic finale he ends up being a true hero, saving her through love and loyalty, not through superpowers. Bolt discovers is what it means to be a loved sinner, what it means to be imperfect and loved in the midst of a fallen world. And in discovering this he learns that love is the only superpower he has. Does Bolt inherit the earth? In a way, I think he does. He learns to live in the ordinary and to recognise how truly good and beautiful that is. He learns that he is not Penny’s servant or protector, but her friend. He learns how to be flawed and to live in a flawed world, knowing the dangers that exist, but also the opportunities for fun and joy. It is no accident that the opening scenes of the action adventure contrast so strongly with the closing credits of a girl and her dog, cat and hamster. It has been a long journey from drama and stunts to revelling in love of the ordinary and everyday. Bolt discovers how to live fully, and to enjoy the grace of life. He becomes meek, in the best sense of the word, discovers the reality of the world and so inherits the earth.

Our freedom and God’s praise and glory

Beatitudes on Film: Being the ‘bigger’ person