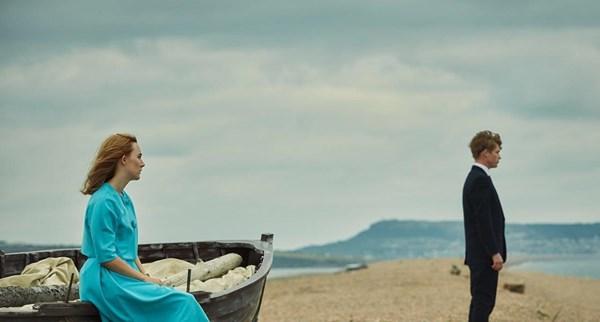 Colm Toíbín’s review for the London Review of Books of Ian McEwan’s 2007 short novel, On Chesil Beach describes it as ‘a pure comedy … told from the point of view of the two protagonists who do not think it is funny at all, and this is managed without making either of them seem tedious.’ Neither the film, adapted for the screen by McEwan himself, nor its protagonists are at all tedious, but while it has moments of levity, it would be quite a stretch to describe it as comedy. Unless of course one finds a dark humour in the sad absurdity of the situation.

We meet newlyweds Edward Mayhew (Billy Howle) and Florence Ponting (Saoirse Ronan) on their wedding night in 1962 and then get to know them better through flashbacks to their courtship (and, eventually, flash forwards to their future). Both are earnest and capable young people, although their flaws are not hidden from the audience or one another – he can be impetuous; she is something of a control freak. The audience is also treated to some time with their wildly different families. Florence’s family is overseen by her cold, academic mother (Emily Watson), in stark juxtaposition to the bohemian Mayhew tribe, who live a largely structure-free existence, revolving around the care of Edward’s mother (a brave performance from Anne-Marie Duff) who suffered a disorientating head injury some years before. The contrast between the couple’s backgrounds gives colour to their characters, quite literally – the scenes in the Ponting household are grey in comparison to the vivid hues of Edward’s home. But, importantly, the family scenes do not feel staged; Florence and Edward’s relatives are memorable characters in their own right.

But it is their wedding night, when the couple are alone, with which the film is primarily concerned. Florence’s fear of her first sexual encounter with Edward is rooted in much more than nervousness, naivety or ignorance – there is a brief hint of an incident of abuse in her past, but it deliberately does not carry anywhere near enough weight to be an explanation of her attitude to sex. Edward is increasingly frustrated by but mindful of his new wife’s apprehension, and eager not to upset her; however, it becomes evident that it is a deep-set repulsion rather than cold feet with which he is faced. With her terrified escape from their marital bed, the narrow confines of their relationship and their hotel room are broken open, and the eponymous beach is simultaneously the setting of their ensuing discussion about their vast, formless future, and a bleak symbol of it.

Florence’s suggestion that she and Edward live as brother and sister, while he is free to sleep with other women, is greeted with despair by her husband. There is no explicit mention by either of them of the sacramental nature of their marriage, but Edward’s reaction might well have found expression in the words of Pope Francis, writing about the nuptial vows: ‘Those words give meaning to the sexual relationship and free it from ambiguity.’ (Amoris Laetitia §74) Ambiguity is certainly the order of the day, now: Edward is left grasping furiously for the future on which he thought he had a tight grip only hours previously, now with only his wife’s indifference to it in support.

Howle and Ronan are well cast. Their romance is sweet without being saccharine, and as things progress they convey the awkwardness, confusion and pain of the predicament in which they find themselves. Howle’s malleable features allow the inner life of his emotive character to be writ large across his face, which makes it easy for a viewer to empathise with Edward’s anguish and means that it cannot be mistaken for wounded male pride. Ronan’s consistent ability to find the subtleties in characters that could otherwise be caricatures means that it is difficult to dismiss Florence as prim and prudish – she has an edge to her, which allows the story to pack its punch. Without Ronan’s barbed performance, it would be too easy to diagnose Florence and Edward as nothing more than a mismatched pair, which they might well be, but there are hidden and far sadder depths to this story than that. Colm Toíbín praised the ‘judicious’ prose of McEwan’s novel; the same compliment might well be applied to this sensitive study.

ON CHESIL BEACH | Official Trailer | In theaters May 18