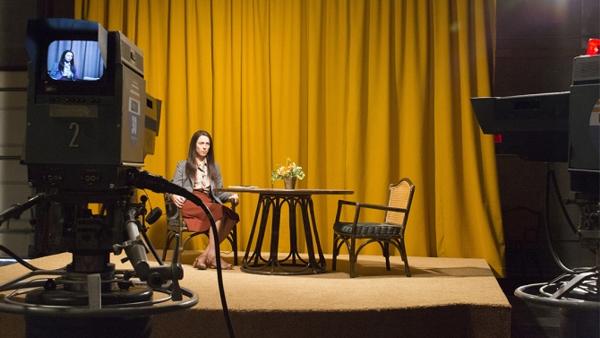 ‘The mass of men lead lives of quiet desperation.’ These words of Henry David Thoreau in Walden, if taken to include women too, could stand as an epigraph for this film. Among its characters are the head of a failing local TV station, fighting desperately to keep it afloat; his alcoholic wife, stumbling drunkenly through office parties; a chief reporter and anchorman, turning to transactional analysis to free him from incoherent nightmares of shoelaces; and Christine herself, a small-town newshound remembered now, if at all, for committing suicide in a live broadcast in 1974.

All of this might suggest that watching Antonio Campos’s latest film, entitled Christine after its main character, would be a grim and depressing experience. It is a measure of his success that this is not at all the case. The film is by turns funny, compassionate and challenging. Anyone going to see it is likely to know where the story is leading. Yet, apart from wishing that there might somehow be an alternative, happy ending, the viewer is also led to ask whether and how the tragedy might have been avoided.

The film loosely follows actual events. Christine Chubbuck was a reporter on a Florida local TV station, covering human interest stories – strawberry festivals and egg production. Not content with this, she dreamt of becoming a top-rank interviewer, grilling Richard Nixon about the Watergate affair, which unfolds in the background of the story. She’s under pressure to produce work that is more cutting-edge, even sensationalist: ‘If it bleeds, it leads’, her boss tells her. But she’s ill-suited to this kind of presentation, awkward and unsure of herself. There is a suggestion that her dramatic suicide was intended as a riposte to this pressure for high ratings at any cost. Just before she shot herself, she referred to ‘Channel 40’s policy of bringing you the latest in blood and guts.’ But Campos offers a much more complex, nuanced account, not a single-issue diatribe.

Christine is surrounded by people anxious to help her, but seemingly powerless to do so. She lives with her mother Peg, played by J. Smith-Cameron, a woman much more at ease in her own skin. They share a small apartment – there are hints of an earlier breakdown – but Christine finds the restrictions this places on her exasperating. She is attracted to the news anchorman, George (a fine performance by Michael C. Hall). Their single, excruciating date moves from her own gaucheness to his attempt to draw her into the therapy from which he himself has benefitted. The camera-operator who accompanies her in her broadcasts regularly holds out a helping-hand, only to be repeatedly rebuffed. Slowly a picture is built up of a woman unable to accept any of the avenues of escape that she is offered.

And yet, you can’t help hoping. In the central role, Rebecca Hall offers a compelling picture of Christine. She is never less than brittle, edgy and tense, tall and uncoordinated. But she also seems passionate and funny, self-aware as her life falls apart around her. She in nearing 30, without ever having been in a serious relationship. An ovarian cyst is diagnosed, reducing her chances of having children. Volunteering in a local children’s hospital, she offers the rather bewildered patients hand-puppet shows that increasingly mirror her own angst.

Her suicide is presented without sensationalism towards the end of the film. By the time it comes, it seems inevitable, yet such is Campos’s skill that you are left still wondering ‘What if?’ In this way Christine moves beyond its rather narrow and specific subject matter to pose more general questions about reaching out to those in despair. Although it offers few answers, it does leave an image of a smart, committed woman, a fine memorial to one who might otherwise only be remembered for her troubled end.