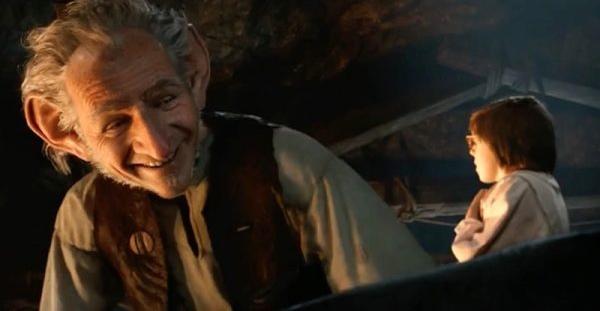 Steven Spielberg’s films retain an allure of which no other directors in modern cinema can boast. Invariably, anything he directs will be a blockbuster; his features always bring people flocking to the cinema. Consider that his latest film is based on Roald Dahl’s long-beloved children’s book, and it is no wonder that there is a lot expected of The BFG.

The story is prime Spielberg territory. We meet a lonely and misunderstood orphan, Sophie (Ruby Barnhill), who disobeys adults’ orders, though not with malicious intent. Sophie comes to encounter a supernatural being, in this case the Big Friendly Giant (Mark Rylance), himself an outcast among his own kind. This simple encounter changes everything for both parties, bringing with it moments of fraught danger and more than a little learning.

Even a cursory knowledge of Spielberg’s oeuvre confirms that the director has the essence of this kind of magical and supernatural genre coursing through his veins, and there is almost a comfort in the familiarity of the piece. This will be especially true if you loved the book as a child and it is only strengthened by the work of the rest of the crew. The script was written in a rare turnout from Melissa Mathison, who wrote E.T. and who sadly passed away before the film’s completion. There is some lovely cinematography on display from regular Spielberg collaborator Janusz Kaminski (although the use of 3D is perhaps not entirely necessary to make Giant Country come to life); and with John Williams’ score in our ears, this feels very much like the film equivalent of a well-worn jacket of your grandad’s.

This sense is heightened by the fact that there is a naivety to this film that you rarely find on the big screen any more. Indeed, so used have we become to the wink-to-camera double entendres of recent ‘children’s’ blockbusters that The BFG ends up feeling a bit too innocent for anyone but the youngest of viewers.  Of course, it is a classic, and so the story holds the attention, even if at 117 minutes it feels perhaps too long for the age group most suited to it. The film tackles simple themes and important ones, but perhaps it is a sorry indictment of our times that the final piece feels mysteriously lacking. This was confirmed somewhat when I witnessed a 9-year-old child Snapchatting his way out of the cinema at the end.

But there is still so much to admire about the film. Rylance’s turn as the eponymous hero is powerful. His BFG is very much real, full of uncertainty and past sorrows. His eyes glisten with self-doubt, and there is a childlike joy to his movement. Young Barnhill does well as Sophie. She is full of earnestness as the prototype young Spielberg outcast whose determination and courage ensure that the adults come to see their own world in a new way. The name Sophie obviously means ‘wisdom’, and so in many ways, this is a story about coming to a new understanding – moving from beleaguered loneliness to a less innocent, but perhaps more complete state. It is a classic tale in so many ways, which is why Spielberg was undoubtedly the best person to bring it to life. However, one is left wondering whether the success of the likes of Pixar have changed the landscape of children’s films forever, and thus whether it was entirely necessary to revisit this particular feature.