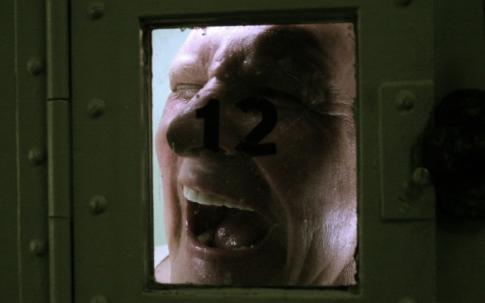 
The English title of this film is rather inadequate:  Jar City suggests New York, or some other gritty urban setting where cops and low-lifes co-exist amid, well, the jars (what ever they might be).  But, according to my handy online Icelandic translator, Swamp or Marshland is a better translation of Mýrin.  Unfortunately Marshland conveys something rather too romantic, and Swamp is rather bathetic.  Shit Swamp or Shit Mist might be a better, if looser, translation, given what happens in this film: an unpicking of what is described in the first ten minutes as a ‘typical Icelandic murder—shitty and pointless’.  Nonetheless, this Icelandic policier shares some elements with others of the trans-Atlantic genre—just like Jim Brass in CSI, our Icelandic cop (the grizzled, grumpy Erlendur) has a crack-head, prostitute daughter, and just like all those private eyes before him, his relationships with those he’s locked in gaol are occasionally complicated.

When you learn what the title means, the repeated low-level, frustratingly foreshortened dolly-shots of these boggy ‘mýrin’ make sense.  Initially, they seemed like clunky film-making—some marsh or mud or tundra, filmed at speed from a helicopter, flashed past the eye, then the camera pulled up to pan across an ugly Icelandic town (vaguely reminiscent of the Scottish new towns Livingstone or East Kilbride) and we lost the context, with viewers left wondering what it was they’d been watching.  Third time round, a consistency of effect emerged, suggesting some coherence with one of the themes of the film:  an exploration of what modern Iceland is, including its evasive and unnameable qualities.

One thing modern Iceland certainly is, is a restricted gene pool.  There’s a story in research about a major study into genetics which had to be abandoned because, in passing, the scientists discovered a tenth of their sample were not the children of the parents they thought they were.  That’s one strand in this story:  there are things in our genes that sometimes people would rather not learn about.  Another is that continuing source of material for writers, people’s rank dishonesty with themselves and with those around them.  DNA has the power to cut through all these lies, with a very scientific answer to that question, ‘who am I?’

Identity, though, is more than just whose genes you carry—and in this way Mýrin locates itself in the long strand of Scandinavian film and art which uses light of the gallery, the stage or the cinema to expose the very personal experience of darkness.  The final scene has Erlendur, a snarlingly independent policeman, apparently cradled (but not quite, for he is never that weak) in his daughter’s arms wondering how we can ever protect ourselves from the darkness that threatens us.  It is a darkness that by the end of the film seems simply essential to who we are, and somehow ‘in our genes’, in our families, embedded in the relationships that have made us.  The idea occurs elsewhere in Mýrin.  About forty minutes in, we are shown a violently recidivist criminal screaming, raging, clamouring at the small Perspex window of his cell, desperate to be released from solitary confinement, apparently terrified of the loneliness.

It’s these moments of Bergman meets Tarantino, combined with the taught writing, sharp photography, and an ensemble of brilliantly sensitive and memorable performances which make this a gripping crime thriller.

The best single moment, though, has to be watching Erlendur eat his take-away.  Turn away now if you are squeamish or don’t want to spoil this when you watch the film.  The sequence starts with Erlendur at a drive-through ordering his ‘usual’ takeaway.  ‘Yes’ he says ‘Sheep’s Head’.  ‘Ah’, we think, ‘an Icelandic argotic nick-name for a Big Mac or a Royale’.  Until he gets home, opens his take-away tray and there, lying on the Styrofoam is indeed a sheep’s head (complete with cloudy white eye gazing up at us) which he proceeds to hack away at with a pen knife, while reading one of the more doleful psalms as part of his research into this mysterious murder.  Then there are the exhumations—but I will leave them for you to discover.  Great stuff.

St Henry Morse SJ: ‘A saviour of life unto life’
Alfred Delp: committed to Christ
Ignatius and the Stars
‘The Fight Between Carnival and Lent’
‘Give them something to eat’: The Christian approach to food aid