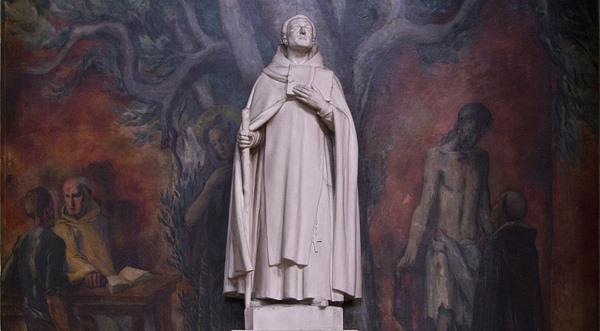 8 August is the Feast of Saint Dominic, founder of the Order of Preachers, a man who was ‘consumed with an ardent zeal for the salvation of infidels and sinners’. What picture of Christian charity do we see when we look at Dominic’s own life and at the Dominican charism? Alex Robertson, who will be entering the Dominican novitiate in September, explains why he is so inspired by the order’s founder.

Whilst he thus laboured to make his own soul pleasing to God, the fire of divine love was daily more and more enkindled in his breast, and he was consumed with an ardent zeal for the salvation of infidels and sinners. To move the divine mercy to regard them with pity, he spent often whole nights in the church at prayer, watering the steps of the altar with abundance of tears, in which he was heard to sigh and groan before the Father of mercy, in the earnestness and deep affliction of his heart; never ceasing to beg with the greatest ardor, the grace to gain some of those unhappy souls to Christ.[i]

Entering a church to find someone quietly weeping in front of the altar is not an uncommon experience. Parishes across the world are open, or at least should be, to people who are in distress. It must be said that it’s less usual to see people weeping over the sins of others; this reaction to our fallen world is so alien to contemporary experience that most people would probably assume that there was some kind of psychological problem at play. But the desire to see others saved, often at great personal cost, is common to the lives of many saints and finds its roots in the experiences, recounted in the Scriptures, of people standing before God. For example, St Paul tells the Romans that he would gladly be counted as accursed and cut off from friendship with Christ in order to save Israel.[ii]  A similar sentiment is voiced by Moses at a time of national apostasy when nearly all of Israel fell from grace at the golden calf rebellion.[iii]  This sense of obligation towards others, of leading them into the fullness of truth, is at the heart of the mission of the religious order that Dominic founded. One English Dominican put it well when he said that if you don’t love men, don’t preach to them; preach to yourself. At the heart of St Dominic’s tears is a great love for other people, and a sincere belief that those who do not know God do not have the fullness of life.

It was this love for other people that led Dominic to leave the world and enter the Canonry at Osma at the age of twenty-five. Born in Caleruega, Spain in 1170 to wealthy parents, Dominic spent some time studying with his maternal uncle, a local archbishop, before entering the schools of Palencia. His student days were marked by a severe famine in Spain, and he sold off many of his possessions to provide material assistance to the poor and starving. Having entered the Canonry, he embarked on a successful clerical career, and undertook what was a fairly typical secular task for religious at that time: diplomatic missions on behalf of the state.

Travelling through the south of France on his return from a diplomatic mission, Dominic was alarmed to see how successful Cathars had been at winning converts. Cathars emphasised the sinfulness of the material world and believed that everything in the created world was there to ensnare us. Here they had taken a standard Christian teaching too far, and their emphasis on sinful materialism led them to shun marriage, sacraments, and even food. Dominic participated in public debates with them, but he and his fellow Catholics made few converts.

The Catholic clerics who debated the Cathars often lived in what seemed to be, and in most cases was, material comfort. They spent their time arguing for a right understanding of poverty whilst looking anything but poor. Dominic sought to correct this and so, in 1215, he travelled with six companions and set up a house in Toulouse, gaining authority from the bishop to preach in the diocese. That same year, Dominic and the bishop went to the pope to seek approval for the new order, which was finally granted in January 1217. The form of monastic life created by Dominic was freer than life under the Rule of St Benedict, allotting more time to study and less to manual labour. Moreover, this was really the first form of religious life to exist in the urban environment: Benedictine foundations were found largely in rural settings, occasionally near towns but not inside them.

Why does all of this matter? Why is Dominic any different from any other saint who founded a religious order? It’s a worthwhile question, and a good antidote to the personality cults that often attach themselves to the founders of religious orders. The key for me is in the opening quotation from Blessed Jordan of Saxony. Dominic felt compassion for other people, and acted in an incredibly Christlike way[iv] towards those whom he considered to be in error, those who had gone astray. His life and example give a refreshing breadth to the Christian understanding of charity.

In today’s world, secular society attempts to limit the extent of the Church’s charitable action to simply providing a service, and denuding the most valuable gift of that action: preaching the Good News. For Christians, our charitable action is one of the ways in which we show the fruits of our faith;[v] it is how we respond to the unfortunately much hackneyed exhortation of St Francis of Assisi: preach the Gospel at all times, and if necessary use words. Moreover, our modern culture limits this charity to efforts to alleviate material poverty or a distressing social situation. Even here there is friction where Catholic charities attempting, for example, to give women the money, baby clothes, and support they need in a crisis pregnancy fall prey to arguments that they limit the autonomy of the women who approach them for help. Dominic broadens our understanding of charity to encompass preaching the Good News to others in such a way that it unites a life of poverty and simplicity aimed at alleviating the material needs of others, and a desire to share the greatest gift that we have: our faith in Jesus Christ.

It’s very easy to get caught up in talk of holy men and women as ‘Saints of our time’. It’s also very easy to paint a picture of a Church under attack from a secularising state and society; and whilst there is conflict, we’re in a much safer position than our Christian brothers and sisters in the Middle East, for example. With these caveats in mind, it’s still important to emphasise that Dominic’s life is a particularly inspiring example, particularly to a good number of young men and women who are offering themselves to the Order of Preachers, and that he has a good deal to teach us at the moment. Our world has changed so much in recent years but no matter what chaos our sins inflict on the natural order and on our society, the world can be renewed and transfigured by faithfully preaching the Good News of our salvation.

Alex Robertson has just left work with the Jesuits in Britain and will enter the Novitiate for the Order of Preachers in September 2015.

[i] Chronicle of the Origin of this Order, compiled by Bl. Jordan of Saxony