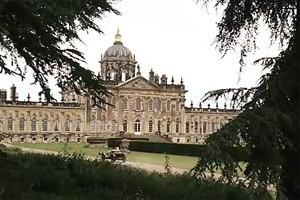 Brideshead Revisited offers a portrait of the world of the proud and privileged few during the relatively brief respite between the two great world wars. It is indeed a world that is insulated from the daily tribulations that beset most people.  There is no lack of food, the finest educational opportunities are available, and leisure reigns supreme.

Enter the young, handsome and middle-class Charles Ryder (Matthew Goode), who is reading history at Oxford.  The term ‘reading’ admittedly warrants qualification, for the film is hardly concerned with the successful completion of one’s undergraduate degree.  Charles’ neglect of his studies is chiefly due to his friendship with Lord Sebastian Flyte (Ben Whishaw), which quickly leads to his inauguration into the lives of the Marchmain family.  Charles is undoubtedly the more sober of the two young men, and it is this sobriety that endears him to Lady Marchmain (Emma Thompson).  Despite his avowed atheism, in contrast to Lady Marchmain’s fidelity to Roman Catholicism, she deems him to be a worthy friend for her son.  It must be mentioned that Thompson offers a fine interpretation of a British Lady who is at once captivating and eerily haunting as a result of her unwavering stoicism.

Charles seems to be fascinated by his venture into the world of Brideshead and the Marchmain family.  The palatial residence is full of artistic masterpieces that seize his imagination.  Moreover, his imagination is equally stimulated by Lady Julia Flyte (Hayley Atwell).  While it is clear that Sebastian wishes that he alone would be enough to satisfy Charles’ desires for intimacy, it is equally apparent that Charles cannot relate to his friend on this level. And so the pursuit begins with Charles in search of Lady Julia’s love.  All the while, Sebastian steadily drinks himself into a permanent stupor and ultimately exiles himself from his family and the privileged environment in which he was always an eccentric.

The religious theme is deeply spread throughout the film. In this sense, the director, Julian Jarrold, does justice to Evelyn Waugh’s Catholic commitment.  The Catholicism that the stoic Lady Marchmain transmits to her children is one that prizes duty above all else.  It is a form of religious understanding that is embraced by some of her offspring, but decidedly rejected by her spouse and Sebastian.  As Lord Marchmain has fled to Venice to enjoy the company of his mistress and only returns to Brideshead following the death of his wife, it can hardly be said that he was a devoted spouse.  Yet, at the same time he provides evidence of being an affectionate and devoted father.  As for Sebastian, his chosen exile is proof that he is unable to conform to his mother’s aspirations.

The climax of the central argument in the film concerns, not surprisingly, religion.  After winning and losing Lady Julia’s heart, Charles Ryder once again finds himself in the chapel at Brideshead.  A candle burns in the darkness, Ryder approaches and contemplates the faith of this Catholic family.  He can easily extinguish the flame and moves to do so, yet ultimately he pulls back.  Despite his incomprehension of the religious understanding fostered among the Marchmains at Brideshead, Charles Ryder recognizes that he is unable to sway them.  The candle remains lit, as does the faith, however imperfect it may be, of this British family.

Aside from challenging the viewers with the predominant religious theme, Brideshead Revisited also offers them the visuals of a world that is fantasy for most.  The Oxford scenes, coupled with those of Brideshead are ones that recall an era of social refinement and protocol that scarcely exist today.  At the same time they do not shy away from contrasting such refinement with the raucous behavior of the same privileged classes whose ample time for leisure turns into debauchery.

In short, it is worth visiting the cinema to see this newest interpretation of Waugh’s celebrated novel.  Yet, as is often the case, it is also worth reading the novel, which goes into significantly more detail, offering vastly richer descriptions of the protagonists, their dilemmas, and the milieu in which they struggle to work them out.

A Week in December

The Jesuit Guide to (Almost) Everything: A Spirituality for Real Life