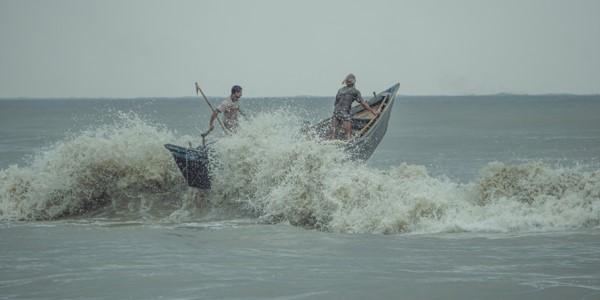 An artist from the city arrives in a small coastal village, accompanied by a shipping container filled with his sculptures. He learnt about the village from his father, whose work had brought him there and who has recently passed away; the artist, Rudro, intends to live there for some time and work. These contrasts set up an elegant if slow-paced drama in this debut film by Rezwan Shahriar Sumit, which brushes against big topics but doesn’t quite unearth them.

I confess to a long-held irritation with characters like Rudro. Their bohemian blunderings tend to be forgiven by their authors and directors, whose surrogates they often are. The set-up in this film may be unique but the plot feels familiar, as the differences between Rudro and the villagers’ beliefs gradually escalate. It’s saved from cliché by the strength of the acting and the artistry of the photography. The cinematographer Chananun Chotrungroj has captured the violence and precarity of lives dependent on the sea: the shots of Rudro’s transition from the city to the village find him carried on a breeze of freedom and adventure through bureaucratic and logistic puzzles up to his arrival at the feet of ‘the Chairman’ of the village, played brilliantly with established weight by Fazlur Rahman Babu.

Rudro’s sculptures bemuse the villagers, whose faith and fatalism reflect the conditions of their lives: in debt to the Chairman who funds the boats, if they catch enough fish they live and if they don’t then they suffer. The film turns on the question of what has caused their catches to fail: are Rudro’s sculptures idols, are they blasphemous, is the lack of fish a punishment? His explanation that it is to do with climate change understandably fails to resonate: the villagers need to find a cause that is within their power to do something about. These are all rich topics for film, especially in Bangladesh, where art and religion have deep and intertwined roots and where coastal villages such as these bear the worst of the changed weather. But we don’t get beyond some basic binaries of art as idolatry vs art as expression, and nor is the ghost of Rudro’s father really explored – his presence is still felt in the village in the cyclone shelter that he had built, a contrast with the toys and artworks that Rudro builds.

The story of the making of the film is a compelling one, buoyed up by prizes and funding, launched on the festival circuit at a time when cinemas are closed, and now on the look-out for distributors. Other than a few professional actors the majority of the roles in the film were played by people who live very similar lives to those that are portrayed. There’s always a risk with these type of films that they become what Tuni, a young woman in the village, warns Rudro about: ‘I don’t want to be your art project’. Only they can answer the question of whether the film succeeds in paying witness rather than using them for material. During filming the tea shop we see in the film was washed away by an unusually high tide. Change isn’t coming to these villages; it’s already happened.

I wish the film the best; it deserves to find audiences both in Bangladesh and around the world. And Sumit’s next film sounds fascinating and more ambitious and worth tracking.

THE SALT IN OUR WATERS clip | BFI London Film Festival 2020