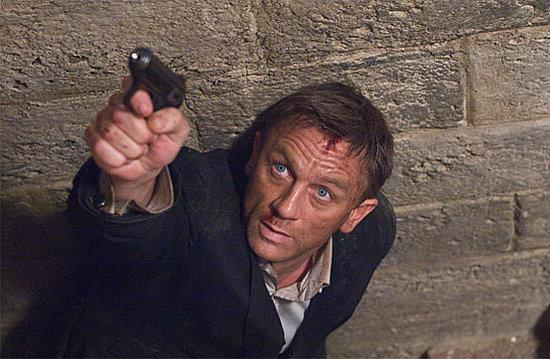 
Poor Alfa Romeo. No matter how much money they paid the producers of Quantum of Solace their car would never be allowed to overtake an Aston Martin. The first line of dialogue in the latest James Bond stresses the hierarchy of Bond products – “there’s a black Aston Martin being chased by a grey Alfa Romeo” – and needless to say, The Car That Bond Drives wheels its way to survival whilst Alfa Romeo flies off a cliff, crashing into a wall of Bond mythology. Quantum of Solace feels at times like a series of exciting advertisements tagged together by an intermittent storyline concerning eco-terrorism: there’s The Car That Bond’s Woman Drives, The Type Of Gin That Bond Drinks, The Airline That Bond Flies With, The Watch That Bond Reveals With A Careful Tug Of The Shirt That – you get the idea. In case this is the first time you’ve used the Internet or indeed opened your eyes and you haven’t seen something advertised using Bond, I won’t spoil the surprise for you what the products are (even though the airline caused me to laugh).

The Bond brand must be one of the most lucrative. He gives us everything that ad execs think we dream of: courage, arrogance, magnetism. Strolling through this feels like walking through the duty-free section of a rich airport: all luxurious unnecessaries that drive people into the arms of credit cards or excessively remunerated jobs – nothing could go wrong with that plan, eh? But forgive the whining of an extra, clearly I’m just jealous.

Between the products we have a hectic action film. The script dispenses of virtually all pretence at humour, and even Bond’s romantic conquest is gotten out of the way with the briefest of shots. No gadgets either: in their place comes global repositioning at a frantic pace – Bolivia, Italy, Haiti, Austria – and the violent fisticuffs that have become Daniel Craig’s trademark as Bond. As with all films of this sort, it’s the editing that creates the magic: I lost count of the number of chase scenes. Two stood out: the first through the crumbling jigsaw that is Siena, and the other intertwined with the finale of Act 1 of Tosca within the guts of the floating stage at Bregenz opera house.

This is the first true “sequel” of James Bonds. Here the story we’re asked to buy into is Bond’s search for revenge and balance following from the events at the end of Casino Royale. The deepening of Bond’s character in that film was positively received by the three people I asked about it, but I wouldn’t like to see Bond mesh into another Jason Bourne: what has been so attractive about him was his purely fantastical nature, an entertaining two-dimensional being. Craig rarely raises his voice above a monotone in Quantum of Solace and the two occasions on which he smiles are dealt with as brusquely as he would his enemies; the idea is that he is too tortured to engage in this kind of activity. It’s intense and far less silly fun than previous Bonds.

The parts of Bond films that I’ve always enjoyed are the opening credits and theme songs. Jack White and Alicia Keys’ effort has come under some criticism but I enjoyed it. The only disappointment was that the design of the sequence had been given to “Tactical Design and Research Agency” MK12 who have created something of a kaleidoscopic union of an iPod and Hed Kandi (the ubiquitous disco/rave design adopted by every club night flyer) advert.

That won’t detract from the Bond attraction I suspect. Hopefully he’ll start enjoying himself more by the next episode…

Me and Orson Welles