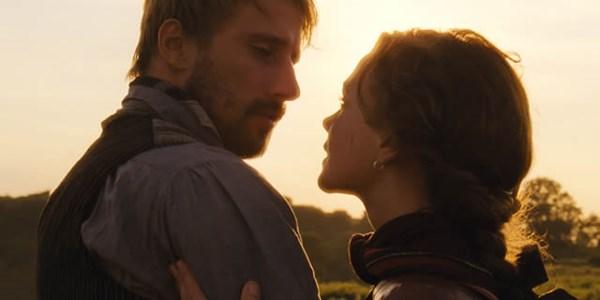 If the resolution of this story could be guessed within minutes, that is as much a fault of Thomas Hardy’s novel as of Thomas Vinterberg’s film, but it does not detract from the charm of either, nor does it tell us anything about the route to the finish line. Far from the Madding Crowd is one of Hardy’s earlier and, it must be said, more cheerful works, although it contains its fair share of misery.  A love story at its core, with well-rounded characters, the thrills and disappointments of romance, and no little humour (although this is largely absent from the screenplay), it is ripe for adaptation to the screen, and David Nicholls has done an impressive job with Hardy’s text.

An exception to that is the jarring first-person voiceover that introduces the audience to Bathsheba Everdene, but this soon gives way to a brilliant performance from Carey Mulligan, the star of the show.  You can almost see her heart jumping and sinking in her encounters with her three would-be suitors: Mr Boldwood, Captain Troy and Farmer Oak. Boldwood is captured well by Michael Sheen, but is arguably relegated from a central character to a plot device, which is a shame. Tom Sturridge doesn’t quite convince as Frank Troy: his initial meeting with Bathsheba is a little underwhelming and he never seems deserving of her infatuation; but he is more plausible in Troy’s ruinous state.  Matthias Schoenaerts, though, is a marvel as Gabriel Oak. The novel’s opening scenes are rushed through, which means that it was always going to be a challenge for he and Mulligan to establish Oak and Bathsheba’s dynamic, but they do so quickly and firmly.  The farmer is a constant throughout the narrative and Schoenaerts brings his stoicism to the screen remarkably well. His hulking physical presence is no small part of this, but even with sparse dialogue and the most subtle changes in expression we have full access to Oak’s inner life, which is more turbulent than his steady facade suggests.

The film’s most emotive scenes are those that Mulligan and Schoenaerts share. The actors seem to enhance one another as the characters do, Oak’s patience complementing the headstrong Bathsheba.  The script is perhaps more favourable to Bathsheba than the novel, playing down her occasional childish stubbornness and carelessness with the feelings of those around her in to order to paint her more as a victim of circumstance. But victims of circumstance are Hardy’s bread and butter, so this does nothing to disrupt the tone of the story. The capricious forces in Hardy’s universe that facilitate chance meetings, perpetuate false reports and leave crucial letters unopened certainly act in this tale, to dismal effect. But tragedy never leads to melodrama, to the credit of all involved.

The Dorset countryside we see is sumptuous; more rustic hues might have been truer to the sense of the novel, but there is no doubt that this film is a treat for the eyes. The cinematography becomes bleaker with the weather and events, and Craig Armstrong’s balletic score keeps pace with the mood of the narrative every step of the way. Such details further enrich a respectable film in such a way as is described in these words from the novel, which have often struck me as an inviting way to think about the workings of grace on human nature:

A coral reef which just comes short of the ocean’s surface is no more to the horizon than if it had never begun, and the mere finishing stroke is what often appears to create an event which has long been potentially an accomplished thing.