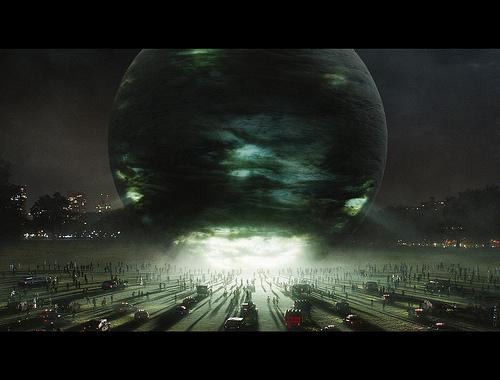 
Preaching isn’t just for Sundays. Scott Direckson’s The Day the Earth Stood Still is an apocalyptic disaster film with a jointly environmentalist/pacifist message, designed to put the heart back into us greedy, mean humans. But what makes for the worst sermons, namely the boring delivery of a half-believed message, apparently also makes for bad films.

In this ‘re-imagining’ of Wise’s 1951 classic film of the same name, astrobiologist and single stepmum (there can’t be many of those out there) Helen Benson (Jennifer Connelly) is taken into federal custody with a select group of other scientists and engineers in a rather rushed manner. America needs them as an unidentified object is hurtling towards Earth, and its point of impact looks set to be New York City. The large, spherical object slows down before impact, and then lands in Central Park. Out walks your regular grey-skinned, long-fingered alien who is then shot and falls into the arms of Helen. The alien is brought in to be investigated, and, following an operation to remove the bullet, its grey skin sloughs off, leaving behind a strangely asexual-looking and generic human male (Yes, it’s Keanu!). The alien calls himself Klaatu, and he has come on behalf of a group of civilisations to see whether human beings deserve to live or not. After seeing how vicious human beings can be, what with impending environmental disaster and the multitude of wars we have unleashed on ourselves, Klaatu deduces that he needs to save the Earth by destroying humanity. The film climaxes with a final apocalypse that looks like a cross between a plague of cockroaches and the Passover. Of course, eventually even the human beings are saved, but only after Klaatu is able to discover the saving grace of humanity, love, through the example of Helen and her stepson Jacob (Jaden Smith).

Biblical references are exploited throughout, and the message strikes a distinctly Christian chord; despite the seemingly all-pervading sinfulness and destructiveness of human nature, love will save us from ourselves. Klaatu’s mission is a thinly veiled Second Coming, echoing Reeves’s last messianic role as the freedom fighter Neo in the Matrix films. Here, though, the emphasis is on the Final Judgment. Furthermore, there is a part of the film in which the alien spheres become arks for the earth’s biological data, before the final plague of metallic bugs. One might think that what we’ve got here is an excellent teaching tool, Christian ideology wrapped up in a Hollywood package. But the package is the problem, so pitifully wrapped that whatever is left inside it remains unenticing.

Reeves’s particular brand of emotion-free acting is, it has to be said, perfectly suited to the non-human Klaatu. Sadly Jaden (son of Will) Smith seems to have picked up the same thespian style as the film‘s lead. Connelly manages to inject a little bit of humanity into the film, but one recognisable human being in a story about human nature is woefully inadequate.

Expensive special effects cannot save nor even help this movie. Since the Star Wars, The Lord of the Rings and Pixar films, computer generated imagery has done all it can do. As is all too often the case in Hollywood blockbusters, the excessive use of effects here means that the imagination of the viewer is never stimulated, leaving the film empty of any sense of fright or suspense. Its cinematography relies on clichés, shots of Big Ben, the Pyramids, the Great Wall of China… you’ve seen them all before, and often shot better.

Disastrous and blatant product placement is what eventually turns this into a disaster. Beneath the glaring logos of McDonald’s, LG, and Honda, the message of the film is lost. These huge companies are at least partially responsible for the consumer culture driving the environmental crisis that this film keeps banging on about. A large chunk of the enjoyment of propaganda depends, of course, on how closely one agrees with its message, and while I personally support the film’s stance, whatever it purports to say is completely undermined by catastrophic film-making and Hollywood hypocrisy. The Final Judgment? Miss this film, and it won’t be the end of the world.

St Henry Morse SJ: ‘A saviour of life unto life’
Alfred Delp: committed to Christ
Persepolis
Ignatius and the Stars
‘The Fight Between Carnival and Lent’