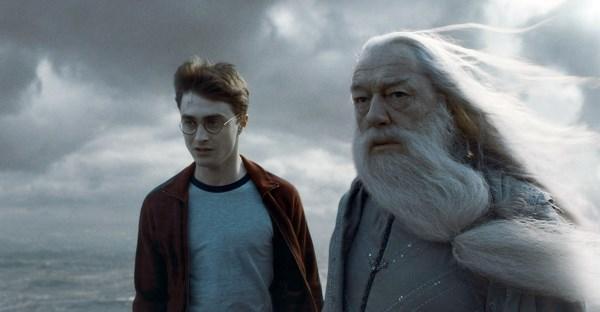 Blessed are those who are persecuted for righteousness’ sake, for theirs is the kingdom of heaven

Persecution, righteousness and the kingdom of heaven can all be difficult concepts for children to grasp, but there is a familiar figure who can help them to understand this Beatitude: Harry Potter! Jane Hellings finds our next Beatitude on Film as she describes Harry and Dumbledore’s quest to find the horcruxes in Harry Potter and the Half-Blood Prince as a pursuit of righteousness.  The story shows that, as Jesus – and Dumbledore! – said, ‘where your treasure is, there your heart will be also.’

Persecution is a word that we hear, sadly, every day on the news. The contemporary persecution of Christians in particular echoes right back to the time in which Matthew was writing his Gospel for the first Christians, who themselves were under threat. Jesus, too, made the ultimate sacrifice in the face of persecution. But for those of our young people for whom persecution of this kind is far removed, thankfully, from their everyday reality, the concept of persecution needs to be translated into their language and experience in order for them to understand this Beatitude.

However, there are two further elusive concepts in this Beatitude: ‘righteousness’ and ‘the kingdom of heaven’. Helpfully, in a later section of the Sermon on the Mount, Jesus gives a fuller explanation of what he means by both.

Defined by the OED as ‘the quality of being morally right or justifiable’, righteousness is not a word in common use and nowadays it has overtones of sententious bombast – but this could not be further from what Jesus was getting at.  As we read on, he tells us not to make a display of our virtue by boasting about almsgiving, or making a show of prayer and fasting.  He is redefining righteousness for his followers as quiet acts of conscience, the dogged pursuit of goodness rather than outward displays of piety.

In this same discourse, Jesus hints at the nature of the rewards of the kingdom.  After warning his followers not to worry about material goods and fashions Jesus says:

From all of this, we gather that the treasure of heaven is not the promise of power or riches but of inner peace, a good heart. Just as true righteousness is defined by what happens in our hearts rather than what we show to others, likewise the treasures of the kingdom are those that come from following our hearts to God, rather than from seeking approval or any other worldly rewards.  To do anything for the sake of righteousness, then, is to store up treasure with which we build the kingdom of heaven.

So when we try to tell young people that they might sometimes have to face persecution for righteousness’ sake, what we are saying to them is: make the right choice, even if your peers are urging the wrong choice and you might temporarily lose face or even friends by doing the right thing. No matter how difficult the consequences, choosing well will lead to a better world.

Harry Potter is a quintessential righteous hero.  He sets off on the path of righteousness in  Harry Potter and the Philosopher’s Stone, when Draco Malfoy mocks the Weasleys’ poverty, and Harry firmly says, ‘I’ll choose my own friends, thank you’, going on to beg the sorting hat not to put him in Slytherin House.

He stands up to and prevails against the persecutions of the Evil One in his many guises throughout the series.  The manifestation of evil starts in Harry Potter and the Philosopher’s Stone with some unsporting Quidditch activity and a rather vague threat of misuse of power.  The persecution Harry suffers in the earlier stories is as much from the spiteful meanness of his Slytherin school mates and some grudge-bearing teachers as it is from any darker forces.

By the sixth instalment, Harry Potter and the Half-Blood Prince, things have got a lot more serious.  There have been tortures, murders and threats of genocide.   Harry has found, loved and lost his godfather, Sirius Black, on top of the inciting incident of the murders of his parents.  We and the protagonists now know what is at stake.  At the end of the previous film, Harry Potter and the Order of the Phoenix (during which Harry is treated as a pariah by many of his peers as a result of a press smear campaign), Harry and his allies know that a war is inevitable but, as Harry says, ‘we've got one thing that Voldemort doesn't have. Something worth fighting for.’  This is their kingdom of heaven, their inner peace which finds expression in a world of tolerance and mutual respect between the wizarding and muggle worlds.

It is during Harry Potter and the Half Blood Prince that the key mystery of the horcruxes is uncovered through Harry and Dumbledore’s joint detective work.   In this they are helped by a talisman and a guardian: the talisman is an old potions text book with inspired annotations made by the eponymous half-blood prince; the guardian is a new character, Professor Slughorn, who holds secrets from Voldemort’s schooldays which uncover the horcrux plot.

With the help of his talisman, Harry succeeds in winning a luck potion which he takes when he sets out to extract Slughorn’s secrets.   He had previously pretended to give the potion to Ron before a Quidditch match, as a result of which confidence boost Ron gives a brilliant performance, winning the match, the girl (Lavender Brown) and the adulation of all.  Hermione is furious with what she believes is cheating, a wrong choice; Harry, however, knew that all Ron needed was self-belief.  It is in this spirit that Harry takes the real potion before setting off on his mission to Slughorn.

The scene where he elicits the secret is the one on which the whole morality of the oeuvre rests.  Slughorn reminisces about a magical fish he once had, which had been transformed from a flower petal.  The petal was from a lily, a present from Harry’s mother Lily, and the fish died when she died.  Harry seizes his opportunity:  ‘She sacrificed herself. She refused to step aside… her love was more powerful than Voldemort…  Be brave, Professor, be brave like my mother. Otherwise, you disgrace her. Otherwise, she died for nothing. Otherwise, the bowl will remain empty forever.’  Slughorn is a vain and cowardly character, fascinated and attracted by evil, but ultimately able to discern the right path. Harry’s argument prevails.

Thanks to Slughorn’s memories, we discover that Voldemort has split his soul into seven pieces and concealed each piece in a horcrux so that he cannot be destroyed.  Harry and Dumbledore go on a final quest in search of a horcrux.  Dumbledore talks constantly of trust: he knows that Harry’s instincts will be to take on the task himself, but also that Harry must force Dumbledore to drink the poison guarding the horcrux.  It is Harry’s act of compassion in fetching Dumbledore some water which rouses the Inferi in the big set-piece that is the climax of the second act; it is as if kindness enrages them.  Dumbledore says, ‘Like your mother you are unfailingly kind, an undervalued trait’.  Here is another takeaway thought for young people, easier to grasp than righteousness: unfailing kindness is something we all do well to reflect on in terms of our own daily behaviours and choices.

In the final act of the film it is Dumbledore who makes the ultimate sacrifice, something neither we nor Harry anticipate.  Draco Malfoy has been tasked by Voldemort with killing Dumbledore, and Snape has been exhorted by Draco’s family to protect the would-be assassin or carry out the execution himself should Draco fail. Draco’s courage does indeed fail him and Snape does the deed.  The full picture of Dumbledore’s, and indeed Snape’s, journey towards this sacrifice does not become clear until the final film.

So the film ends on the theme of trust.  Draco breaks trust in letting the Death Eaters into Hogwarts, but fails to kill Dumbledore.  Harry, always torn by Dumbledore’s trust of Snape, is horrified when Snape casts the Avada Kedavra curse that kills Dumbledore.  ‘He trusted you!’ Harry yells.  So Dumbledore joins the list of those beloved by Harry who have been persecuted to the highest degree for attempting to do what is right.

First among these is Harry’s mother, who made the ultimate sacrifice in the face of persecution and whom he glimpses in the first film through the Mirror of Erised, the mirror that, according to Dumbledore, reflects ‘the deepest, most desperate desire of our hearts.’  Where his mother is, there is Harry’s heart, his kingdom of heaven.  So continuing her fight against the forces of evil and ensuring that her sacrifice was not in vain is not only Harry’s defining motive, it is something of his reward; by seeking goodness, he is united always with his mother. Dumbledore’s death further fuels Harry’s righteous anger and passion, and even in the face of further persecution he does not hesitate to continue the struggle of those he has loved and lost in pursuing and destroying the horcruxes through the final two films.

The deepest, most desperate desire of our hearts is God. At times, when we try to reflect that in our own lives, perhaps others will fail to recognise God’s image in our actions, and with this lack of understanding comes the risk of persecution. But this Beatitude tells us to remain strong. Every act of righteousness – seen or unseen, welcomed or rejected by others – reflects God’s goodness back into our Mirror of Erised and helps us to see more of God’s kingdom. In the final instalment of Harry Potter, Dumbledore will echo the words of Jesus: ‘where your treasure is, there your heart will be also’; in this final Beatitude, we are assured that always seeking the good, even when that is hard, will mean that our treasures and our hearts are in heaven.