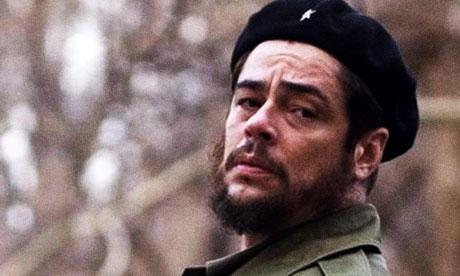 
I approached Che: Part One with trepidation. Films about revolutionaries have a tendency to reduce their subjects to simplicities of passion and charisma and no character seemed more likely than Ernesto ‘Che’ Guevara to fall victim to this. But I left the cinema feeling I had been educated: this was a dignified and engaging history lesson about Guevara’s part in the successful Cuban revolution of the late 1950s, which even at over two hours long left the audience eager to see Part Two, to be released in February.

The challenge with films about recent history is how to balance fidelity to the facts, the audience’s expectations of a hero, and the different interpretations of the events. One solution – seen for example in The Dreamers, set in 1968 Paris – is to intertwine the growth of the character with external events. The internal revolution in the hero involves us in the violence happening around them, and any facts that would impinge on the overlap between personality and society are elided or altered: generally what pans out is that the hero’s passion is spread evenly between The Cause and The Girl Who Happens To Be Beautiful. What happens in Che: Part One is the opposite: it isn’t a study of Guevara’s personality and motivation (this in many ways has been covered in The Motorcycle Diaries); rather he is situated as one very significant actor in a much wider cast of revolutionaries. You don’t leave the film feeling that you “know” Guevara, but you do leave with the desire to know more about what else was happening. This is in no small part due to the performance of Benicio Del Toro as Guevara – there is no overacting or swagger, but instead a sense of a driven, intellectually curious leader.

What we see of the revolution naturally portrays the dangers and excitements of the battles between the revolutionaries and the increasingly despondent army. However, we also see the “drier” aspects of societal change: discussions about agrarian reform; the political skills needed to mould disparate human beings into a coherent unit (which doesn’t simply involve an Independence Day-style heart-buster of a speech); the creation of a printing press and schools in the revolutionaries’ camps so that illiteracy is banished as part of the fight against tyranny. Details such as farmers being handed sticks to clamp between their jaws so that during an air raid they would not bite down on their tongues add to the sense that this is not a glorified depiction of the revolution we are watching.

At the heart of the story is the historical figure of Guevara. The film does not investigate what his critics have to say about him in much depth – to do so would involve delving into the myths about “Che” that have been perpetuated, for good and bad, ever since his elevation to fame. The film splices together action from the revolution in Cuba and Guevara’s visit to the United Nations a few years later as the head of the Cuban delegation. In the latter footage we see other delegates attacking him for his vocal interference in their countries’ affairs and protestors criticising him for his role in the execution of enemies of the revolution – an event that fell beyond the timeline of Part One and which we may see in Part Two. Despite these criticisms of him what emerges from this film is his rigorous adherence to the moral code stemming from the fight for justice. From the perspective of 21st Century Britain this is a challenging vision: the struggles we are called to engage in may not endanger our lives in the same way but they are no less pressing for all their apparent lack of drama.

From hostility to hospitality: Refugee Week 2014

Francis of Assisi: A gospel way of life