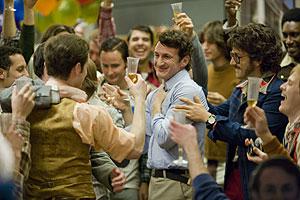 
Milk is an ode to its eponymous hero. We are reminded from the outset why Harvey Milk’s heroism was necessary: footage of young and middle-aged men taken from bars and clubs to be crammed into police vans, the camera in their faces as they cover eyes and duck behind arms and furniture, flinching lest their identity be made known and their livelihoods uprooted. Out of such violence came one of the most famous gay rights movements of the late twentieth century, the leader of and martyr for which was Harvey Milk, assassinated in 1978 eleven months into his role as a city supervisor.

This biopic sits in a trio of recent exhumations of North American politicians – Che Guevara and Richard Nixon have both had their memories embalmed in digital celluloid – and of the three this film works hardest to enshrine its hero in Hollywood’s bastion of contemporary saints. There were understandable mutterings when Sean Penn was cast to play Milk – surely a homosexual actor could have been found to play someone whose sexuality had become a rallying point for millions? – but Penn’s performance proves that it was not only the physical resemblance between him and Milk that got him the part. His Harvey Milk is courageous, playful, affectionate; a public speaker whose nervous gestures belie his convictions; a politician, “street therapist” and public figurehead.

What we see of his work as he moves to San Francisco and fights failed election campaigns before his final success and death, is a kind of accelerated community organising. Events follow each other in rapid succession. The tedium of detail recorded by organisers such as Saul Alinsky (and no doubt experienced in reality by Harvey Milk) here fades into the gaps between energetic ad-hoc street corner meetings, marches where the crowd’s energy threatens to consume each hurled voice, and speeches heard by hundreds of thousands. There aren’t any meetings in drab Novembers attended by a dozen pensioners: here the first fighters are young and stylish and beautiful. Discussions about tactics (publicity material, which battles to fight) become discussions about the primal elements: which path is more courageous? It’s almost impossible for film to capture the genuine first steps of a movement: the fear that it simply won’t happen, that people will lose interest, that the finale will be a damp signature recording a motion passed to disband. As soon as we enter a cinema we know that it’s going to be something on a grand scale. The presence of cameras means that drabness (one of the revolutionary’s greatest enemies) is one of the experiences that film really struggles to capture.

What Milk needed was an enemy. Enter Anita Bryant, all orange juice-healthy and establishment lipstick and spouting the kind of God-hating rhetoric that the Churches may spend years more cleaning themselves of (granting equal employment and housing rights to homosexuals will, apparently, lead them to “recruit” children; these were the days when society’s thesauri gave “pervert” and “paedophile” as synonyms for homosexual). Sadly we only hear one alternative voice using religious language to stand up for equal rights. The agenda for homosexual rights in California has nowadays reached the position of being able to engage in the argument for parental rights; it is worth remembering that elsewhere in the world, where to be publicly different can result in imprisonment and death, the Churches are constantly engaged in fighting to ensure that every human being is treated with dignity.

This review has suggested that Milk is a dramatisation rather than a documentary of Harvey Milk’s campaign. That this is true is, in this case, not meant as a criticism. Politics, as Harvey Milk points out to his supporters, is a stage for the grand gesture. As he dies he falls facing the opera house where the previous night he had been watching Tosca. The emotivity of Milk, with its stirring soundtrack and rapid juxtaposition of Big Events, falls somewhere between that of politics and the opera. The film therefore stands as a continuation of Harvey Milk’s fight for the “Us-es” of the world: another gesture for the side of the powerless. I think he would have probably enjoyed it.