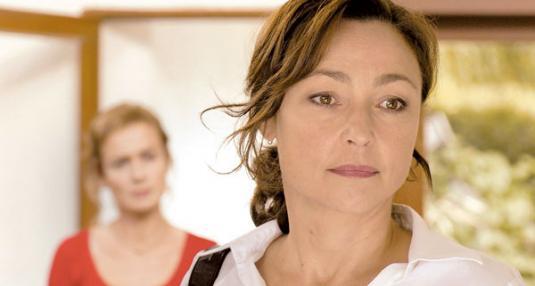 
The word for it, according to one of Jorge Luis Borges’ fantasies, is a zahir:  ‘the masses use the word for beings or things which have the terrible power to be unforgettable, and whose image eventually drives people mad.’ The zahir in question in Mark of an Angel (L'Empreinte de l'ange)is a seven year old girl whom Elsa (Catherine Frot) believes to be her own daughter, who died seven years ago in a hospital fire. The zahir works like a dead weight on the mind’s surface, distorting the ground so that everything flows down towards it. Everyday life becomes secondary to its calling.

Initially it appears that the story that has captured Elsa is her divorce and the custody of her son, Thomas: she must prove that she has overcome the psychological instabilities that have pushed her husband away. The watcher suspects it will be a Kafkaesque tale of a stressed single mother being forced to prove her sanity when those who judge her have already made up their mind – Angelina Jolie in Changeling, for example. But we follow Elsa as she meets and then stalks Lola, lying her way into the family’s life and abandoning her own child with her parents. It’s stylishly done, the audience is not allowed into Elsa’s head until we have watched her create the network of half-truths that allow her to get close to the child.

It’s a film full of unredeemed hurt. Elsa is the beating source of this, torn between what she feels to be true and what everyone else around her tells her is so. Within her character is the truth of how feeble our human attempts at healing can feel in the face of such pain, especially when the tools that we often use to heal ourselves – the heart and the mind – are damaged too. Mark of an Angel doesn’t leave you fearful at the violence in the world in the same way that No Country for Old Men might, but it does have its own terror to it; that the impulse to love can wreak such damage on some of those within whom it flows.

Borges’ zahir is intensified to suit his story telling and the majority of us are fortunate enough to escape the kind of possessive obsessions that plague Elsa. But it’s a provocative symbol of obsession that challenges our often half-hearted ‘obsession’ with God – we are reminded of the many times that we allow ourselves to forget God and grant the ‘terrible power to be unforgettable’ to the far more transient things and people around us. Elsa doesn’t choose her obsession but we as believers have the responsibility to choose to nurture our obsession with God, no matter how frail the material with which we have to work.

It’s not a film to be watched for relaxation – prepare something or someone bright and sunny to meet you after you leave the cinema. But it does challenge us to reflect on what our zahirs are, and where they might be leading us.


Mark of An Angel Trailer