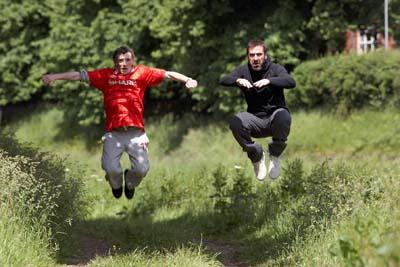 
‘The noblest vengeance is to forgive’. So says Eric ‘The King’ Cantona to Eric Bishop (Steve Evets) in the latter’s time of need. Ken Loach’s latest picture, Looking for Eric tells the story of how this and other lessons are learned by Eric Bishop as he turns to his hero for help in his loneliest and most troubled hours.

Eric Bishop is a postman. We are introduced to him just after he has spent some hours circling a roundabout against the traffic and inevitably been in an accident. He has suffered a breakdown. Eric is an overlooked man, and he is alone. His stepsons, for whom he is solely responsible, show him nothing of the respect they should have for him. His words go unheard in his own home. His boisterous and affable friends, well meaning as they are, drown out his sensitivities. Eric is living a life of regrets; we see the potential that he had, the mistakes he made in his youth which led him to that roundabout.

I find it puzzling to read descriptions elsewhere of Looking for Eric as a comedy, as endearing and uplifting. Loach portrays the darkness that surrounds Eric clearly and honestly. Regret is a vicious thing, it can gnaw away at a person, and Eric’s regret is shown so clearly to the audience that sharing in it becomes unavoidable. All seems hopeless for Eric, until his friend Meatballs (John Henshaw) persuades him and his friends at the Post Office to participate in a Paul McKenna visualisation exercise. In a clever scene, the magic of which resurfaces throughout the rest of film, we see each of the Manchester postmen name and visualise being a person they look up to. We have in the room: Frank Sinatra, Nelson Mandela, Sammy Davis Jr, Gandhi and, of course, Eric Cantona. From this moment on, life for Eric will be different.

Later, Eric is smoking a spliff (stolen from his stepson) in his room, talking to one of his many posters of ‘Eric the King’, when behind him appears his hero, bearded and barrel-chested. In a twist that may cause a dramatic increase in Paul McKenna’s book sales, Eric Cantona becomes Eric’s imaginary mentor and, over several marijuana-fuelled conversations, the King gives Eric the advice he needs to take some initiative and regain control of his life.

The relationship between the two Erics is central to the film, especially given the very public troubles that Cantona went through just over a decade ago. By emphasising the flaws they share, Loach makes a comment on hero worship: he reminds the audience that the figures subjected to such admiration are only human. Cantona may have been a football player of unparalleled talent, admired and revered by thousands, but he had the same flaws as Eric Bishop, the postman. Cantona spends a lot of time talking with Eric about his footballing achievements (though the subject is always brought up by Eric) – cue numerous goal montages, which Loach does well to make relevant – and always follows up with a semi-profound proverb which he then applies to some aspect of Eric’s life. It seems that Cantona has all the answers Eric needs, but cannot find for himself; the answers are simple once the problems are shared.

Cantona’s performance is sublime. Dressed in understated clothing and often speaking quietly, he is portrayed very differently from the Cantona we see in the goal flashbacks, posing like a conqueror before thousands of adoring fans. The fact that his character is imaginary, coupled with the memories of his charisma on the pitch, bestows an enigmatic gravitas upon the bearded and collarless Cantona that visits postmen.

Looking for Eric is a film about relationships, and about how the past can overshadow the present. It depicts the loss of control, and, ultimately, the redemption and recovery of a man who is sinking. We find out towards the end of the film (stop reading here if you would rather discover some minor plot details for yourself) that what drove Eric to his roundabout was the prospect of meeting his ex-wife Lily, the mother of his daughter and the love of his life, whose heart he broke when he left her soon after their daughter was born. The guilt and regret he felt were too much to bear, and, unable to confront his mistakes, he ran. Thanks to Eric’s ‘meetings’ with his hero, he starts out along a path to recovery. He learns to swallow his regrets and cope with his guilt. He apologises to Lily (Stephanie Bishop) for the life that he denied her, the same life he denied himself through his own flaws. Previously, he was too afraid and ashamed to ask for forgiveness; with Cantona’s help he dares to hope that Lily is capable of the ‘noblest vengeance’, and tries to move forward, rather than bemoaning the mistakes of the past. Eric is also reconciled with his stepsons, through a surprising secondary plot which arises towards the end of the film involving gangsters, guns, youtube and Cantona masks.

The film does end on a happy though not clichéd note. The characters and relationships portrayed in the film are very real, and the issues and emotions explored are sufficiently complex. Some films, one feels, deserve a happy ending – Looking for Eric is one of them.