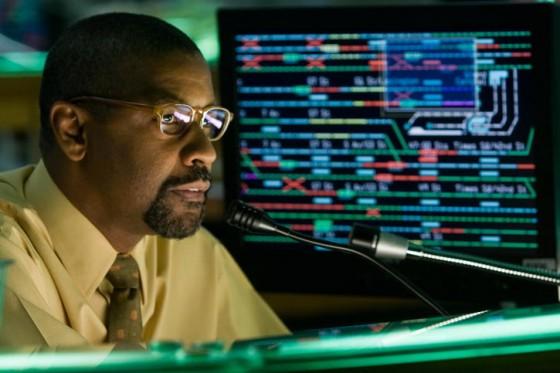 
It’s never easy to adapt a much-loved book for the big screen, and perhaps it is an even harder task when the novel has already been made into a film, which in turn has been imprinted on many a cult fan’s memory. However, being young and unaware of the success of both the novel and the original film of The Taking of Pelham 123, I took my seat before the film impervious to the overbearing comparisons made by so many critics.

The film, set in post-9/11 New York, begins in a busy subway station, the familiar hustle and bustle of the metropolis apparent from the start. We are sucked into director Tony Scott’s world where everything is fast, noisy and chaotic. ‘Pelham 123’ – the name of a subway train – is on its usual route carrying hundreds of anonymous passengers to their destinations along the Lexington Avenue line in Manhattan. Within minutes, Ryder (John Travolta), the film’s cruel, yet oddly charming villain has undertaken the frankly insane task of hijacking a subway carriage.  In no time at all he has punched a train driver in the face, shot an innocent civilian and demanded ten million dollars from the Mayor. No messing about here, then.

All of this is relayed to subway dispatcher and all round nice guy, Walter Garber (fans of the original will note the nod to Walter Matthau’s character in that film, Zachary Garber), played by the ever-messianic Denzel Washington, who must negotiate with Ryder in order to save these innocent lives. Although, as Ryder says to Garber, ‘A good Catholic knows that nobody is innocent!’ Everyone, according to Ryder, is guilty of one thing or another, and it is perhaps this premise that provides the film with its main source of tension. Indeed, Tony Scott probes the audience’s consciences by calling into question the moral fibre of each of the characters, regardless of their position in society. The film’s central characters are all guilty of a crime, be it personal, political or financial; even Garber is implicated in allegations of bribery. No one, it seems, is safe from moral decay.

Thus, Ryder wants to posit himself as some kind of balancer of morals. ‘Everybody owes God a death’ he muses, before shooting someone without a hint of remorse. Ryder, despite his terrifying penchant for violence and cruelty, is charming. Fitting, therefore, that his past is firmly rooted in the Wall Street stock markets, allowing Scott the opportunity to make a well-timed comparison between stockbrokers and cold-hearted murderers. Travolta plays this role with relish, at times bordering on the pantomime villain everyone loves to hate. But this comedic aspect is overdone – so much so that even small children are unlikely to be scared of a grinning, bearded and tattooed Travolta.

But perhaps the biggest problem with the film was that the audience was denied an insight into the characters’ motives. We know hardly anything of the other hijackers’ aims and we are left to presume that they are merely subservient cronies whose purpose in life is to fulfill Ryder’s twisted goals, having fallen victim to his malevolent charm. I found myself confused at the end of the film even with regard to Ryder’s obsession with money. What are his reasons for the hijack: financial or personal? Why is he so pleased to see a host of zeros in his bank account? It is as if Ryder is presented to us on the one hand as a psychologically complex villain, for whom the acquisition of money is not of sole importance; and on the other hand as a one-dimensional greedy businessman whose raison d’être is the acquisition of wealth: the two personalities are left unreconciled by Scott.

That is not to say the film is a failure. I was completely and utterly gripped. Scott manages to keep the audience hooked; the sweeping shots of Manhattan and use of Google street view camera work really are a spectacle. Its countdowns, plot twists and the ambient drums in the soundtrack –reminiscent of The Apprentice – crank up the tension. But despite the charm and acting talent of both Travolta and Washington, one cannot help but feel that Tony Scott, although having made an entertaining crime thriller, could have made more from the talent he had at his disposal.

Finding freedom with St Ignatius
Ignatius and the Bible
Pierre Favre: ‘Everywhere there is good to be done’
Flannery O’Connor’s ‘Sacred Monstrosity’
Priesthood in the Society of Jesus