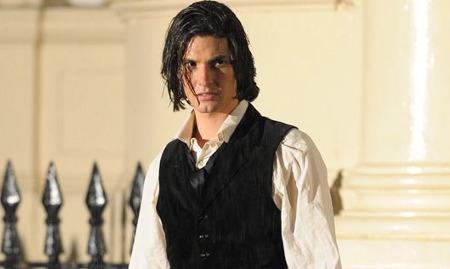 
At the heart Oscar Wilde’s novella is an image: a picture of a beautiful boy, one so compelling and seductive that it takes on a life of its own—picture and boy swap souls, with the boy remaining forever young, while the picture ages, reflecting his moral and physical corruption.

Given this central metaphor (an utterly beautiful image of youth), film and cinema should be an ideal medium to re-create The Picture of Dorian Gray with its fascination with the fleeting, electric possibilities of adolescence—film is perfect for catching those daily moments of sudden discovery and realisation, those epiphanies of adult passions and ideas, that are at the heart of both growing up and the darker aging of Dorian Gray.  Larry Clark’s shocking Kids (1995) attempted it, while a number of photographers have certainly achieved it.  Nancy Honey’s photographs focus on youth and the young, and her sequence of images of her daughter, Daisy (one picture for every year of Daisy’s life, from naught to her mid-twenties) is often breath-taking in beauty, intimacy or insight; more controversially, there are Jock Sturges’ frank images of young women on the brink of adulthood or Will McBride’s more overtly sexual (and homoerotic) obsession with young men.  And if readers are at all uncomfortable at this point, they might be reassured by Germaine Greer’s assertion that there is space for a heterosexual delight in the beauty of young men in her study on the subject, The Boy.  Heterosexual or not, I think this was probably the kind of picture that Oscar Wilde had in mind.

Unfortunately, whilst a number of makers of images have succeeded in saying something about the gaze—aesthetic and erotic—that lingers on the body of youth, the team behind this version of Dorian Gray have not.  By their own admission, the producer and director found the idea of the portrait—this central element to the story—so problematic, that they procrastinated, and stumbled on a solution, rather than designed one.[i]  The result was conventional computer-generated ghoul straight out of the character file from Buffy the Vampire Slayer.

Which is such a lost opportunity.  Because if readers are feeling in any way awkward with the pictures of beautiful boys, that is possibly the point.  Wilde was, after all, concerned with a forbidden love, a love that dared not speak its name.   The team behind this film were at least aware that the novella written by a gay man in the 1890s had an edginess that might be difficult to recreate in our liberal England—but their solution was to film one oh-so-not-very-shocking gay kiss and a lot of raunchy sex in boudoirs, brothels and dingy pubs (these sequences, with jump-cuts to delicate middle-class teas, were by far the most successful elements in the film).

Unfortunately such a focus on the sex fails to challenge us, creating instead a certain prurience and reduces Wilde’s parable to a simplistic morality fable and rather misses (yet another) point.  Because Wilde was not saying something as vulgar as ‘lots of sex will damn your soul’—it was the absence of love, not the presence of physical sexuality, that damned Dorian Gray:  the egotism that is predicated on his inability to love anyone else was what created his desperate search for an enduring emotional truth and aesthetic pleasure. A search that was, of course, doomed.

Obviously, a film of such a famous novel can only be an interpretation, not a recreation.  So the makers were broadly right to take a liberal attitude to the text.  But such an approach can only work if the product actually is an interpretation, not merely a superficial copy, generally following the flow of the plot and getting most of the points of the story in the right places (though not all).  A fresh interpretation should offer something new, some insight or new understanding.

I’m afraid this Dorian Gray does not achieve this.  Nor is it successful from a number of technical points of view.  There are numerous points of weakness in the script:  at least three very stagey moments, not helped by some inconsistent cinematography (mad in places, flat in others), and one or two moments of clunky melodrama that seem straight out of Eastenders.  In addition to other moments of incoherence, the look of the film just doesn’t hang together:  I’ve already noted the borrowings from Buffy the Vampire Slayer, but other commonplace references abound to create a very strange visual mix, including a portrayal of Victorian London that is lifted from Tim Burton, over which is slapped costume moments of Edwardiana straight out of Merchant-Ivory’s A Room With a View.

There are also some very strange moments of dialogue. I know I twice heard the line ‘I am sorry for your loss’.  Now I’ve never used this expression myself, but I hear it regularly on CSI: Crime Scene Investigation, the one set in contemporary Las Vegas.  Maybe ‘I’m sorry for your loss’ is an authentic Victorian expression and the 19th Century settlers of Las Vegas donated it to the local argot.  Maybe the screenwriter of Dorian Gray was trying to say something about those superficial utterances that don’t really mean anything, but on balance, I think it’s an intrusive expression in a script set in 19th Century London and just another example of some sloppy writing:  an emblem of the general lack of thoroughness and thoughtful engagement that seems to mark this film.