Skip to main content
Photo by Kent Pilcher on Unsplash 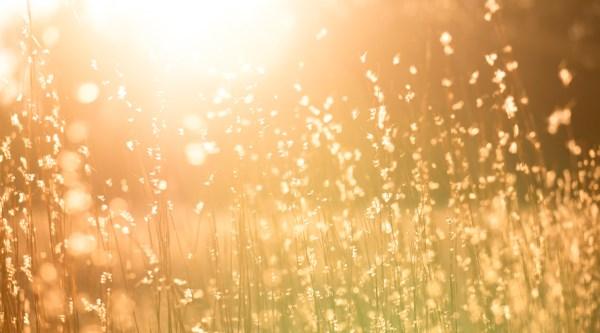 Nathan Koblintz finds treasure hidden in ‘The Bright Field’, a perhaps little-known poem by R.S. Thomas. For National Poetry Day, spend time with this poem and ponder how it shows us that ‘there is an equivalence between the spiritual process of being attentive to the presence of eternity, and the creative process of writing and reading a poem.’

I have seen the sun break through

to illuminate a small field

for a while, and gone my way

and forgotten it. But that was the

pearl of great price, the one field that had

treasure in it. I realise now

that I must give all that I have

to possess it. Life is not hurrying

on to a receding future, nor hankering after

an imagined past. It is the turning

of the lit bush, to a brightness

that seemed as transitory as your youth

once, but is the eternity that awaits you.

This poem invites us to turn aside to an experience of deep reality. The journey of reading is illuminated by three sources of light: the sun; the ‘lit bush’; and the brightness of eternity.

No new thing under the sun

We begin with a missed opportunity, maybe even a habit of missing opportunities. The scene is a cloudy day, or maybe sunrise; the sun breaks through briefly, changing the colour and appearance of a field; the speaker notices it, leaves the scene, and then forgets it. This is mundane enough for it to be a universal experience: the field is small, the sun breaks through ‘for a while’, but we have no identifying details that would fix this scene to a particular place or time. The sunlight is also a free-floating metaphor that could stand in for any of the incidents or encounters that make up most of our days and nights: encounters that lack novelty, intensity, duration; encounters that we are sure will happen again and as such do not demand our full attention.

The speaker’s mental states flow in a motion of light and shade: the initial interest, then the forgetting; remembering, and the regret of having forgotten; the determination not to repeat this again. This too feels like a universal experience: the experience of having missed an opportunity, and not realising it until it was too late. Of having undervalued something, or someone, or a situation – of having gone on your way and forgotten them, even though there was something precious there. Or perhaps having harmed that relationship, broken it up through your choices.

But what follows this confession and regret is a paradox. Instead of: ‘I realise now that I should have given all that I had to possess it’, we have: ‘I realise now/that I must give all that I have/to possess it.’  The opportunity that we thought had been missed has not actually disappeared. There is still the opportunity to give all that I have in order to possess the treasure that the past contained. This paradox disturbs a linear view of time, where the past is lost and the present always streaming away between our fingers. In the third sentence (‘I realise now…’), the speaker enters a second layer of understanding – the first realisation was that the mundane scene he had forgotten was precious; and this second revelation is that what was precious has not been lost. The value of the pearl and the treasure lie in their permanence, their eternal rather than temporal nature.

This is the drama of revelation, of the interplay between the permanence of reality and the transience of the mindsets that we project onto it. It is embedded in the language with which we talk about the sun – the way we say that the sun comes up or goes down, when we know that we are the ones doing the turning away or the turning towards. The scene at the start of the poem was always precious, it always contained treasure in it, regardless of the speaker’s mood or level of understanding. And it is still accessible, despite the regret and disappointment at having once missed it.

Then Moses said, ‘I must turn aside and look at this great sight, and see why the bush is not burned up.’ When the Lord saw that he had turned aside to see, God called to him out of the bush, ‘Moses, Moses!’ And he said, ‘Here I am.’

An irresponsible act: interrupting his day job to satisfy his curiosity, turning aside from his duties to look at something unusual. Here enchantment leads to an encounter with God.[1] This poem is the product of a similar ‘turning aside’, or responsiveness, to beauty: the processes of remembering, reflecting, understanding, described in the first half of the poem, lead to the recognition that the sunlight on the ‘small field’ is equivalent to the light pouring from the burning bush on Horeb. The poem records both this recognition, and the process of coming to it. R.S. Thomas’s choice of ‘lit bush’ rather than the expected ‘burning bush’ enacts this newness – instead of a hackneyed phrase that through overuse has become detached from the shocking newness of what it describes, the language is made new.

The second half of the poem thus shakes itself free of the recollections, regrets and wishes of the first half. Life is not to be found in ‘hurrying on’ to future activity, nor in ‘hankering after’ the imagined memories and regrets of the past. ‘Turning aside’ is a gerund, a verb operating as a noun – a constant orientation towards the deep present. The turning aside is a turning towards the lit bush, towards beauty, and to your name and task spoken by God.

There is therefore an equivalence between the spiritual process of being attentive to the presence of eternity, and the creative process of writing and reading a poem: sieving through the mundane experiences and people that make up today, patiently waiting for a part of the pattern to emerge, for grace or significance to make itself known. The parables of the Kingdom of God in the first half of the poem are about searching for value – the commercial patience of the merchant looking for the finest pearl, or searching through many fields for treasure until it was finally found. These are metaphors that invite application to the poem itself: the poem is a discovered pearl, created by the frictions of loss/possession, regret/hope, misapprehension/understanding.

The poem therefore has the potential to be a ‘lit bush’ – an encounter that attracts your attention away from all of the other demands on you.

The poem could have been written in prose, like this:

I have seen the sun break through to illuminate a small field for a while, and gone my way and forgotten it. But that was the pearl of great price, the one field that had treasure in it. I realise now that I must give all that I have to possess it. Life is not hurrying on to a receding future, nor hankering after an imagined past. It is the turning aside like Moses to the miracle of the lit bush, to a brightness that seemed as transitory as your youth once, but is the eternity that awaits you.

The 99 words are the same, but what the poem loses is the unfolding drama of discovery and revelation. The poem creates this drama through the silences of its line breaks. Those white spaces at the end of the lines act as tiny pauses that delay meaning. Of the five sentences that make up the poem, only the first begins at the start of a line; the other sentences begin mid-line and are interrupted by the line-ending just as they gain momentum –

And half way through the eye has to leap across a brushstroke of white space, a beat of silence, at the point where the poem is gathering itself for its three declarations about what ‘life is’. This syncopation is sustained up to the very end, where the word ‘once’ jolts into the start of the final line – ‘but is the eternity that awaits you.’ Line and sentence end in unison.

Why this poem, and why now? The first word of the poem is ‘I’, the last word ‘you’: someone is trying to tell you something.

But this is a poem marked by silence; an unpeopled poem, except for I, you, and Moses. These are all silent: I, remembering a field and the way that I had forgotten it; Moses, caught in his act of turning aside; you, reading the poem. The brevity of the poem creates a silence around it, a silence of interpretation. Whatever the poem is trying to tell you, it has couched it in metaphor and parable, or images of such ordinariness that your imagination must complete them. I described it as a pearl, but laid out in its near-rectangle on the page, it also resembles a field – a bright field, a field with the treasure of revelation in it. When I read it, I hear eternity reverberating within.

Nathan Koblintz is a former member of the Thinking Faith Editorial Board.

[1] This often reminds me of American Beauty, and Lester’s ‘deeply irresponsible’ reaction to his attraction to his daughter’s friend. That desire ultimately shatters his slothfulness and leads him back to his vocation. http://www.thinkingfaith.org/articles/20120315_2.htm

‘A dayspring to the dimness of us’