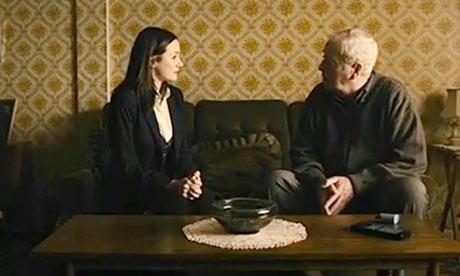 
Harry Brown is a vicious fantasy. It represents inner-city England as a nightmare of hooded youths, sink estates dominated by crime, with only a beleaguered police force and vigilant pensioners holding the line against complete social breakdown. There are no sympathetic young people in Harry Brown, no victims of broken families; only nasty gangsters, manipulated by other nasty gangsters, and the innocent elderly who are their prey.

The pitch for the film is obvious: take British social realism, and pitch it against the heroic American revenge movie. Michael Caine was the only choice for the hero. His career has encompassed both character performances and macho adventures, and he does bring a moving realism to his portrayal of Harry Brown. He manages to bring sincerity to both the wild shoot-’em-up finale and the scenes of Harry’s domestic grief, and his role, perhaps the only one written without a blatant stereotype in mind, holds together the film’s relentlessly bleak, and conservative vision.

There is plenty of tension in the shoot-outs, and the caricaturing of drug-dealers, rent-boys and street-corner louts makes this a memorable movie: the scene in the cannabis factory is a striking counter-blast to Guy Ritchie’s mockney fantasies. The final reveal, when the arch-villain turns out to be Sid, the landlord of Harry’s local is well-disguised – perhaps too well-disguised, since Harry’s surprise is echoed by the audience, who have forgotten who Sid actually is.

Unfortunately, the gritty realism becomes overwhelming, the brutality sickening. The over-groomed police commissioner is inevitably proven wrong by the plucky, compassionate female detective, and Brown commits his killings with impunity and cleans up the estate. The strange mismatch of British attention to detail – the early scenes recall Ken Loach – and American drama – Caine is impersonating Clint Eastwood with a London accent by the end – lends the narrative an uncomfortable, if appropriate, tension and, as a description of hell on earth, the underpass that links Brown’s estate to the hospital is unforgettable.

The film’s moral foundation is equally disturbing. Caine’s past in Northern Ireland is merely a training ground for his murderous skills, and the youngsters are just nasty because they can be. A brief scene, where Brown puts the money taken from two dead drug-dealers into a church collection box, seems to signify his moral intent, but fails to consider quite what the Church would make of an old man running the streets tooled-up and angry.

At no point is there any discussion of the circumstances or political or social forces that might have shaped the chaos and alienation, no hope of redemption except through gunshot and knife-blade. This is a fascinating, home-grown take on the revenge movie, and Caine, once again, shows his versatility: there is, however, a dark undertone to the excitement, especially when set against a film like The White Ribbon, which manages to explain evil without condoning it.

Glimpses of the Gospels

iWitness: The View from the Palace