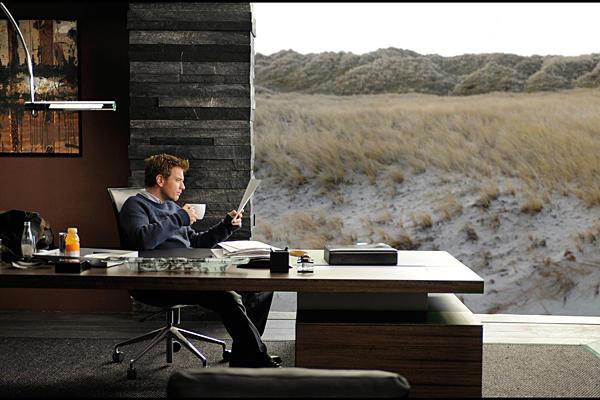 
Why did Roman Polanski make this film? Intriguing, clever and atmospheric but inconsistent and ultimately disappointing. Perhaps Roman Polanski made the best film he could out of the material: Robert Harris’ 2007 book of the same name. That same year, Harris and Polanski had originally meant to collaborate on Pompeii but filming was cancelled due to an actors’ strike. Perhaps Harris’ new book, a political thriller featuring an ex British Prime Minister being investigated for war crimes, and released as Tony Blair gave way to Gordon Brown, became their new joint project.

The pre-election release of this film adds to its interest. A former Prime Minister, Adam Lang (Pierce Brosnan), is sieged up in a friend’s house in Martha’s Vineyard. The house is a place beyond human habitation, a stunningly brutal, modernist bunker containing very bad art. The house is occupied by Lang, his wife Ruth (played by Olivia Williams), a small secretarial team and two housekeepers.

A publishing company has paid $10m for Lang’s memoirs and the original ghost writer, (the ex-Prime Minister’s long time aide) has apparently committed suicide by jumping off the island ferry. A new ghost writer (Ewan McGregor) is recruited to finish the project. Inexperienced in political writing, the Ghost, who is never named, promises to bring ‘heart’ to the project to ensure a bestseller. He sleeps on every stage of the journey from London to Martha’s Vineyard and enters Lang’s bleak, tense, sophisticated household an amoral everyman – willing, witless and ‘wet’.

The weather is unrelentingly stormy and the film’s colour wash is a muddy sepia; this lack of light increases the feeling of claustrophobia not only in the house and landscapes but in the relationships between Lang, his secretary, played by Kim Cattrall, and his wife. Although the children are never seen they are apparently there and the Addams Family comes to mind, prompted by the gloomy colour and the tomb-like house as the trim. Vain Adam is adored by his stiletto wearing, pencil skirted secretary and endured, just, by his flowingly black-clad, tetchy wife. Cherie Blair should be delighted by this spirited, clever, irascible and sexy portrayal.

The writer and Lang begin the book but swiftly a dogged, sole, anti war protester outside the house is joined by legions plus the media as the International Criminal Court announces an investigation into Lang for war crimes. Helicopters hover and the house occupants become instant TV images. The Ghost writer briefly becomes speech writer and Adam Lang and his secretary decamp to greater refuge in Washington leaving the writer, who sets off in the lashing rain to investigate his predecessor’s death and the secret behind Lang’s rise to power.

The women are the most satisfying characters – one loving and subservient, the other the Daily Mail’s dream of Cherie, as the ultimate baddy harridan wearing the trousers, manipulative and essentially corrupt.

Is Polanski trying to do too much to find the full potential of both the domestic drama and the political thriller? The film is most satisfying in the household setting: when the Ghost is drawn into the team by writing a speech for Adam; in the intimacy with the Vietnamese staff of the house, always glimpsed by Polanski through shots framed by doors and half opened curtains working hard – they are constantly kind and initiating acts of thoughtful hospitality.

The film has so much that is good – humour, a great cast, a clever resurrection and revenge of Robin Cook (Lang’s sacked foreign secretary played by Robert Pugh), brooding atmosphere and contemporary relevance. But seen as a whole the pace was lacklustre with annoying inconsistencies of character and a too-convenient ending.

My male companion commented that an episode of Inspector Morse would have been more thrilling and longed for the plot and pace of The 39 Steps. The women in the party were much more generous, perhaps because the importance of women to Polanski is greater than that of action or plot.

The Ghost may have bigger male stars in Ewan McGregor and Pierce Brosnan but it is Kim Cattrall and Olivia Williams that join the ranks of great women in Polanski’s films: Kristin Scott Thomas in Bitter Moon, Natasha Kinski in Tess and Faye Dunaway in Chinatown. For Polanski, women are always on top.