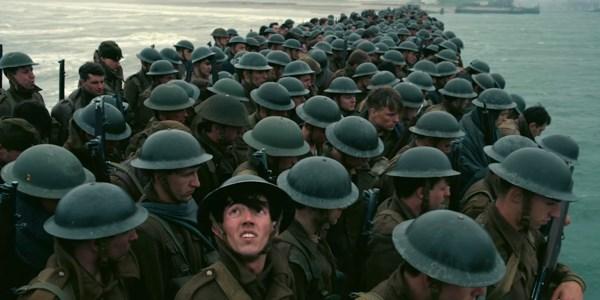 The story is told of a Jesuit, one of five Jesuit military chaplains rescued at Dunkirk, who having arrived back at the London community where he was to be lodged, was sitting in the refectory, somewhat shell-shocked and in battle fatigue, slowly eating his breakfast. In walked one of the parish community and, seeing him there, came over to say hello. He asked where the chaplain had come from, and the chaplain explained stumblingly about Dunkirk, the difficulties, the trauma etc.… The priest was unimpressed by the slightly garbled story, so when the chaplain paused, he briskly brushed aside such trifles, saying; ‘Well, it has been quite difficult here: I have three masses to say this morning… ‘

Luckily Christopher Nolan, the director of Dunkirk, grasps the importance of the drama that was a fateful turning point in the conduct of the Second World War.

Nolan is an advocate of innovative film-making techniques and even goes as far as chiding his fellow directors for not using the potential that the technology now offers to film-makers. With that warning echoing in my ears, so it was to an IMAXed version of Dunkirk at the Science Museum in London[i] that I went.

In this high definition form, the film is a visceral assault on the senses. I am one of those people who instinctively feel that the Second World War was fought in black and white, so even the richly coloured opening sequence of a half-dozen British soldiers quietly walking down a French street caught my breath.

The history of the Dunkirk evacuation is generally known and simply described, so Nolan wisely does not over-complicate the portrait by trowelling onto the canvas the politics or the battle strategy of May 1940. Instead he concentrates on the miniature, engaging with the men whose lives were drawn into the drama unfolding on and around the northern French beach. The British army, navy, air force and civilians are thrown together in the scenes, mirroring something of the chaos of the event itself in which hierarchies of power were semi-dissolving in the face of the German onslaught. The uncertainty and fear that this provoked led to generosity and initiative, but also it led some to take refuge in petty differences: ‘We’re the Grenadiers, mate,’ says one squaddie, threateningly shooing away an innocent young soldier from the back of a pointless queue down to a shipless seashore.

In an interview a few years ago, Nolan tellingly comments: ‘I want the audience to feel my movies, not understand them’. In this film he consolidates this philosophy and consciously wrestles logical progress from your grasp, creating an interwoven narrative with a series of time-loops where earlier events are seen again from a different viewpoint. Those who have seen his earlier works, such as Inception, Interstellar and Memento will not be surprised by this tinkering with time, and it is a sign of his giftedness for story-telling that although the looping is unsettling it is not baffling.

Nolan uses the camera in two ways which are augmented by the IMAX: firstly, and most clearly, the camera widens and the whole of the cinema wall can be filled with a magnificent landscape, a haunting seascape or an aerial dogfight where you find yourself unconsciously leaning to resist the G-forces as the airman pulls around to line up an elusive Messerschmitt 109 in his gunsights. The second use of the HD camera is to get up close and personal with an individual – you are literally in the face of the soldier diving for cover in the sand, or you are uncomfortably watching the increasingly fraught struggles of the RAF pilot as he tries to slide open the jammed canopy of a downed aircraft slowly sinking beneath the waves of the Channel.

My now-deceased colleague, Br Norman Smith SJ, had a distinguished career in the RAF and he would have been glad to see that the RAF got a fair showing of the drama of this film. Norman’s first real blooding was during the Dunkirk evacuation, which was well before the iconic Battle of Britain. Norman used to explain to me that the RAF had a tricky job during the evacuation as their task (often using unwieldy Blenheim light bombers) was to attack the Germans inland, thus trying to keep the Wehrmacht at a distance from the troops on the beaches. It meant, though, that those troops felt that they were unprotected from Luftwaffe attacks above their heads.

Norman remembered walking through Dover soon after the evacuation and ahead of him in the road a group of soldiers set about beating up an innocent RAF man because they believed the RAF had abandoned them at Dunkirk. It was for the Dunkirk action that Norman was firstly decorated in the field by the Duke of Gloucester and then, much later, formally received his DFC at Buckingham Palace.

In Dunkirk the French are on the fringes, the Germans are distant, faceless and menacing and referred to simply as ‘the enemy’; so, except for the fleeting glimpse of a rather irrelevant Dutchman, the film is British and male by design. This hermetically sealed world heightens the claustrophobic nature of this most isolated and paranoid of pursuits.

It says something about Nolan’s Midas touch in the US movie industry that he managed to get the big budget and still keep the focus tight and uncompromised. The pressures from the Hollywood backers to get a big US star into the cast would have been immense, and then to soften the masculine edges the system calls for an anachronous woman centre stage (‘We need some love interest! What about Nicole Kidman? Couldn’t she play an Australian nurse?’). Thankfully, both pressures were resisted.

It should be noted in passing that the Americans do not have a good track record of telling the British stories of the Second World War. Most notoriously this was evident in the movie, U-571, in which the American Navy heroically captures an Enigma cipher from a German submarine, an encounter that  leads to the breaking of the German codes, the shortening of the war, etc.… This feat was actually achieved by the crew of the HMS Bulldog who boarded and salvaged the Kriegsmarine Enigma machine and code books before America even entered the war. The inaccuracies in that film were so glaring that it led the then Prime Minister, Tony Blair, to declare to Parliament in 2000 that U-571 was ‘an affront’ to the memory of the British sailors involved. That is probably overstating it somewhat, but I occasionally break out in a cold sweat when I imagine what will happen when Hollywood eventually finds The Dambusters in the archive: ‘Based on a true story...’

There are imperfections to Nolan’s telling of the tale, but these, I suspect, are mainly due to fiendishly difficult editing of the work: for example, the appearance of the Dutchman and his boat is not terribly well explained. Nolan himself is not immune to the temptation to buff the story for effect: towards the end of the film, a powerless, gliding Spitfire manages to keep aloft, manoeuvring and harrying the opposition for a suspiciously large amount of time, before it finally pulls off a neat landing on the sands. The Dunkirk evacuation was actually the first major conflict in which the RAF deployed the Spitfire, so we might give Nolan the benefit of the doubt for perhaps indicating that the Spitfire moved, by poetic drift, from the gritty realism in the early scenes of battle to its later mythic status by the time of the rolling credits.

Military failures are not necessarily unconditional defeats. In 1942, General Slim took control of the crumbling British army in Burma and by calm control turned what threatened to be a Japanese rout into a measured withdrawal into India; and it was that controlled withdrawal that built the platform for the eventual defeat of the Japanese in 1945.

Likewise in 1940 it was the gambling against the odds that kept 300,000 men in Dunkirk from German POW camps and allowed the British to build for the Normandy landings in 1944. As in life, nervelessly throwing dice against the odds is sometimes preferable to logically throwing in the towel.

Fr Bernard McKenna SJ, who was later to have a distinguished ministry in the south Rupununi in Guyana, was one of the five Jesuit chaplains on the Dunkirk beach. At some point he tripped and fell and it was only a number of months later that a package arrived at the Jesuit Curia in London. A redoubtable Tommy had come across Bernard’s prayer book on the beach, had flicked through it, saw there was no name but that there was a Jesuit supplement inside, so he carried it back to Britain and then passed it onto the War Office who sent it through to the unknown Jesuit via the British Provincial.

A moment of grace in a time of grim darkness; Christopher Nolan captures the time and such moments impressively.

[i] The Science Museum in Kensington has an IMAX cinema which they use for occasional movies. It is almost £5 cheaper than that at the BFI on the South Bank in London.