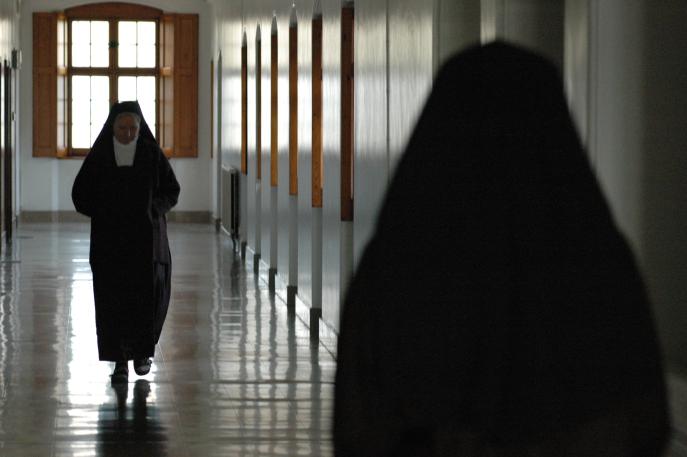 Within the space of four days, I saw two very different interpretations of belief in God – both utterly convincing and truthful and both referring to two groups of people living in an enclosed world. The first was the play, Jesus Hopped the A Train at the Trafalgar Studios performed by the superb Synergy Theatre Project (working with prisoners, ex prisoners and professional actors) and secondly the film, No Greater Love.

Needless to say this film is no performance but a frank insight in to the daily lives of the Carmelite Nuns at the Monastery of the Most Holy Trinity, Notting Hill. The nuns lead a cloistered life dedicated to prayer and contemplation, rarely leaving the monastery except to visit a doctor or dentist. Silence is maintained throughout the day with the exception of two periods of recreation. There is no TV, radio or newspapers and the only technological device seen is a computer where a nun orders shopping online (bringing a chuckle from the audience, as this seemed so out of the ordinary bearing in mind the general rejection of materialism). The film interweaves a year in the life of the monastery with the daily rhythms of Divine Office and work. Centred in Holy Week, it follows a year in which a novice is professed and one of the senior nuns dies.

As soon as the film started I felt I was entering in to a world of peace, away from the glitzy (dare I say false, at times) and frenetic world outside where there is no time to think or reflect. A world of peace it may be inside, but it is absolutely not one of escape – one of the nuns pointed out that once you are without the distractions of all the outside world has to offer, you come to face to face with yourself, the hardest, and most ‘real’ thing to face (and this surely is not always a peaceful experience). Their honesty is poignant and humbling – one sister talks of a period of doubt that lasted 18 years and even now has the baffling honesty to say on film (with a little laugh) that there is always the fear that the atheists are correct and there is nothing. This shows that the nuns do not live this life because they have certainty: they live with their doubts but go on because they have such a deep belief in God that they give themselves selflessly. Sceptics might ask what this achieves, other than loneliness together with uncertainty, but one of the nuns answers this in her explanation of the need for silence: she says having this silence (almost governing their lives it would seem) gives them the freedom to explore and understand these doubts – the silence not only becomes like music but it allows the presence of God in. We might think of these nuns as trapped inside such confines, but in fact paradoxically, it occurred to me that those of us outside the confines have more need to watch that we don’t get trapped by everything that is not real and non-silent; faith or no faith, take away the craziness of daily life and we would all have doubt and void. And, nor do I feel that the nuns choose to fill the void with God – it is a genuine call to a life dedicated to God because they feel it.

As we are taken around the Monastery, we see the nuns engaging in the activities of eating, gardening, keeping the Monastery clean, praying... We even see them dancing, which Whyte says they do once a month for 40 minutes! Whyte himself, in the Q&A session afterwards, said how privileged he was to make the film and have this kind of access. The film was 10 years in the making after he put a series of notes through the Monastery letter box, which were politely rejected before he finally was accepted via the same method of communication – letter. The author Kazuo Ishiguro says ‘the film looks breathtaking, like various Dutch Masters come to life’ and Whyte does indeed capture the stillness and tranquillity that recall this Dutch domestic painting of the 17th century – for example, the Vermeer-style angle of light as a nun stands by a window. It is visually stunning.

I would have liked to have written down all the interviews the nuns gave to turn into forewords of wisdom on the human condition, which says something for the film’s universal appeal. One describes her own torments of the soul as ‘darkness, boredom, dryness, deadness’, a feeling that no human person has not experienced, and it is for this reason that the film is so moving; it is a testament to these ladies and definitely reaches out to us.

There are few of us who would live this closed life, but at the end of the film it is quite obvious that these nuns are as open as it gets when it comes to facing life, oneself and reality.

Learning to live together?